When You Shampoo Your Hair Twice… 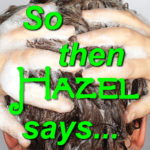 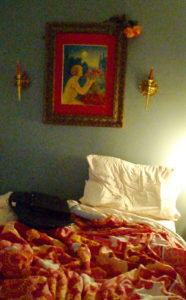 THIS IS WHERE THE MAGIC HAPPENS.

I bet my brothers think I’m sitting around eating bonbons, taking them for granted. I am not! The proof shall be in the pudding. Because writing is not what I’m supposed to be doing! Well, not entirely. I’m supposed to also work on Facebook Live! chats and demonstrations and clean the rubble out of my sewing room to get it ready for prime time.

But the day before yesterday I had a mini meltdown. I forgot to record a check which almost had disastrous consequences, and I had a delayed reaction to the death of my cat where I finally had a good cry. Still, I gamely forged on, attempting to do my first Facebook Live! broadcast as I had promised the day before because I had promised it, only to discover when I played it back that there was no sound. And I’d been so flawless, too! I bet the person watching was disappointed. Har.

Well, Rome wasn’t built in a day! This “sound not working” is a common problem apparently, and you need some sort of knowledge about computers to fix it. My brain is already fried from all the learning I’ve done recently as I get myself up to speed. Believe it or not, I’m not gifted in that regard and can only take in so much technical knowledge at a time. I took a day away from it yesterday to write. I felt guilty the whole time, knowing there was so much more I was supposed to be doing. 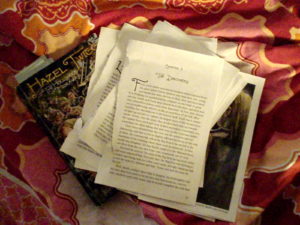 I took the draft copy of the book and tore out all the chapters that are going to go. Believe it or not, it was very satisfying. Plus, it’s easier to work with if I can hold the current product before some somewhat major tweaks in my hands.

Then this morning as I was in the shower (twice a week whether I like it or not. Don’t judge me! I bet if you worked from your home where you went days without seeing a soul you’d morph the same way. And it’s not like I’m breaking a sweat going from one comfy chair to the next, plying a needle this way and that. Feel the burn!) my mind was so preoccupied with new chapters and plot twists that I washed my hair twice and was reaching for the shampoo bottle for a third time before I realized what I was doing.

I think it’s because ever since I got that rejection letter I’ve been re-writing and re-plotting in my mind, and I finally have the chance to actually DO it. I AM INSPIRED. I am writing like a FIEND and the story’s coming together so well that I cannot stop.

So there will be a slight delay in the other outlets, but they are still coming soon. Do not fret, dear brothers.

5 Commentsto When You Shampoo Your Hair Twice…