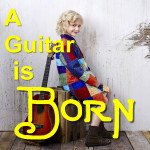 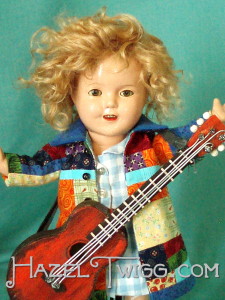 You know how it is. You’re halfway through sewing together a quilt-like coat based on the recent “Dolly Parton’s Coat of Many Colors” TV Movie because you thought it was so sweet, and you decide that your doll needs a little something more. So you ask your sister, who is also The Mayor.

“What do you think I should also make for Shirley, a hat, or a guitar?” 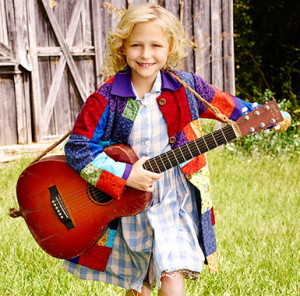 “A HAT,” she immediately responded. She knows me. She knows I’ll toil for hours and hours over something unfamiliar, like a guitar, and that lately I do not have hours to give. 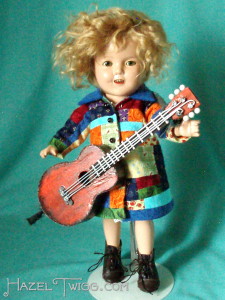 Thus begins my description for Shirley Temple as little Dolly. She’s O.L.D. No. 62 and you can see her adoption page HERE.

I truly enjoyed “Coat of Many Colors.” It was such a sweet and wholesome movie, along the lines of Little House on the Prairie, and you just don’t see much of that kind of thing on TV nowadays. I wanted to pay tribute.

Making the guitar was tricky. I only had enough materials to make ONE. So flaws and all, there it is! Fortunately, the guitar in the movie’s a little beat up as well. 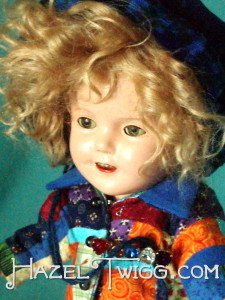 Here she is with her hat. It’s hard to tell, but it’s a very pretty dark blue velvet.

When I completed her guitar and put her up for adoption, do you know what that wee Mayor said upon seeing her?

“Also,” she continued in her tinkly, fairy-like voice, “the hat should be blue.”

You’re not the boss of me! I silently shouted inside my head (because Santa’s watching especially close this time of year).

But then, all I could think of as I tried to find just the right color for her hat was, Blue. Blue, blue, blue…

I meant to do that all along. 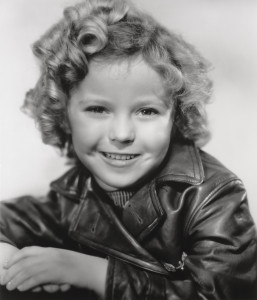 So it’s obvious who the first two of the three legends referenced in the title are: Dolly Parton and Shirley Temple! Who’s the third?

The third legend is more literal! It’s the legend created for the map I made to guide me when I sewed together that coat. All 60+ tiny pieces featuring 11 different colors of it! I had to go with the fabrics I have on hand (and lucky for me, I have a LOT (although I’m still always craving more)), and then I had to figure out how to piece it all together so it would be as close as possible to the one in the movie.

I made a map of that coat, numbered all the different sized squares, assigned letters to each color, and then I made a legend for that map. Then it was just a matter of keeping track of each piece and sewing them in order. Good thing I love puzzles! 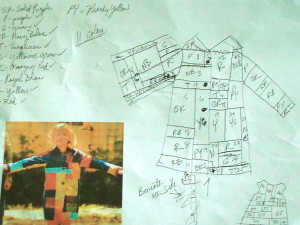 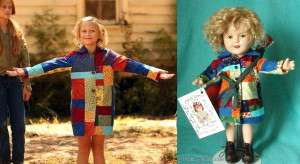 If you missed Coat of Many Colors the first time, I think it’s showing again Christmas night on NBC. Give it a gander, if you’d like.

Woodland Fairy Shirley Temple was adopted by Linda L. of Portola Valley, California! She also adopted Penelope in the past. Thank you, Linda!