Let’s Hear It For The BOY! 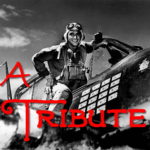 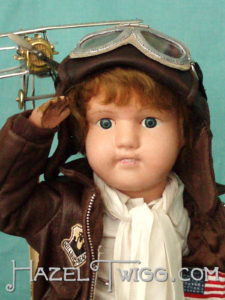 We were playing in the attic, as we frequently do while waiting for the next Once-Loved Doll to appear. Out of nowhere, I heard a whirring noise. I looked up and saw something zooming around. Of course I assumed it was a bat. Hazel and her little friends were too engrossed with a trunk they were exploring to notice. I forced myself to remain calm as I calculated how long it would take us to get to the stairs if we crawled really, really fast. I steeled myself to look more closely at the flying creature and was relieved and surprised to see that it was actually an old metal plane come to life.

“What on earth?!” I exclaimed.

Just then, far below from the first floor, there was a loud and insistent banging at the door… 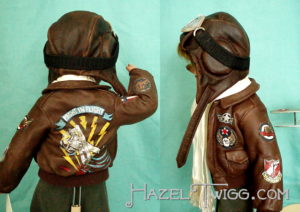 Thus begins the description for O.L.D. (Once-Loved Doll) No. 95, J.P. the Flying Ace! You can see his adoption page HERE.

J.P. had a bit of a false start. After 94 dolls, NINETY-FOUR mind you! Ebay says I can’t put “HazelTwigg.com” on my pictures, or say, “Like Hazel Twigg on Facebook…” so after three days, they took my original adoption page down. HMPF. Well, I can understand why, I guess, but…HMPF! 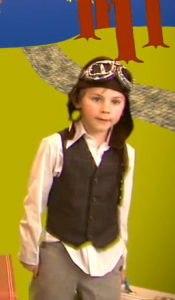 No matter! He’s back now. The ORIGINAL J.P. is my darling nephew, son of my brother Kenny. Ever since I saw him dressed as a flying ace in my other brother Dennis’s award-winning short film, “The Girl Who Wanted To Do Something Big,” I wanted to do a flying ace. I was just waiting for the right guy to come along… 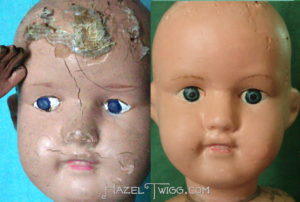 He finally did. Our J.P. is a Schoenhut all wood doll. He arrived bald, with his eyes repainted, and some chipping and a big blob of hardened glue on his forehead, poor fellow! It was a daunting task, but I got the glue off, filled in his forehead, and repainted his eyes to look more like they originally would have. I was also lucky enough to find a really great wig for him in my stash. 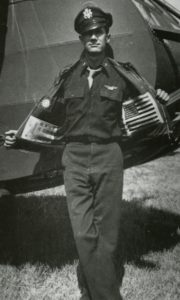 While researching the flying aces of WWI and WWII, I learned so much, especially from this article. Namely, about the leather bomber jackets they wore. They were called A-2’s, and each airman personalized their own, painting images onto the back of the jacket, and adding painted leather patches to the fronts and sleeves. 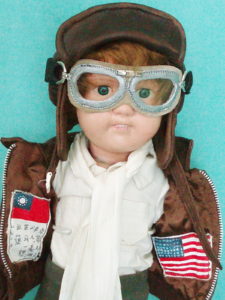 More important was what was inside. No, not just then men themselves (that goes without saying), I’m talking about their Blood Chits. A Chit is a notice an airman would wear on the inside of his jacket. It would have the flag of the country they were in, with a notice written in the local language.  The Blood Chit states that the bearer of the Chit is American, requires assistance, and that those who help the soldier or pilot will be rewarded for their service.

Also, when the men discovered that having an American flag on the backs of their jackets made them easier targets, they started wearing them on the inside, near their hearts. It makes me so proud and grateful to think of their great spirit! 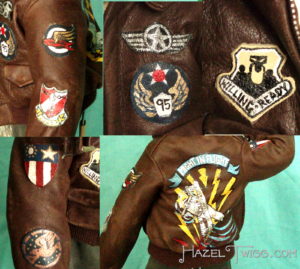 These are all based on actual patches. Note the “95” on the top center patch. 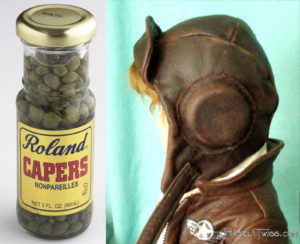 I now have a jar of capers in my fridge with a tinfoil lid.

Our J.P.’s jacket is made from a Wilson’s leather jacket, and I hand painted each of the patches as well as the image on the back and the blood chit and American flag with 48 stars, which was the number of stars at the time. The jacket alone took me four days! The helmet was made from the same Wilson jacket, dyed with a combination of Old English furniture oil, and craft paints in burnt umber with a touch of black because I didn’t want the jacket and hat to exactly match. For the ear inserts, I used two lids from jars of capers from our local grocery store. I love a good caper! I then sanded it for wear.

Here’s J.P. with his sister, sweet Sophie, aka the model for the Hazel Twigg logo. 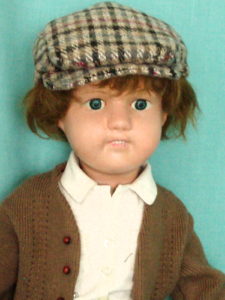 As with all my O.L.D.’s, if I can, I like to give them an additional outfit. So…where to go for inspiration, I wonder? BACK TO NEPHEW J.P. There’s a photo of him I adore. It could have been from a different era! In it, he wore a cap. I remembered as I sewed that my dad used to wear one just like it. Imagine my pleasure when I discovered after talking to my mom, that the hat J.P. is wearing in the photo IS my father’s!

It’s called a “flat cap” or a “driving cap,” and I found a useful pattern and tutorial HERE.

I also cut up a sweater to make a sweater for our J.P. “Put leather patches on the elbows!” my wee little sister cried. So I did, although you can’t see them here. 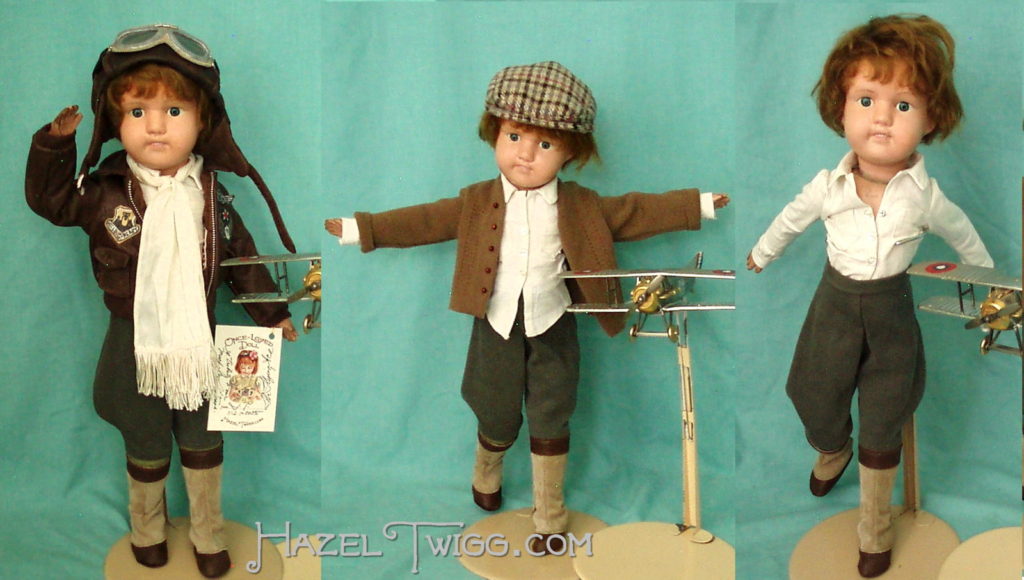 Working on J.P. has been a labor of love and joy and tribute for not just my nephew, but for all who have served, and what better time than when Veteran’s day is almost upon us? Thank you, Veterans.

Meanwhile, O.L.D. No. 94 Aubrey the Autumn Fairy was adopted by Linda L. of Portola Valley, California. If memory (and my search engine) serves me correctly, this is Hazel Twigg doll number three for her. Thank you, Linda!

And with that, I leave you! Veteran’s Day is a November 11th. Thank a Veteran, if’n you get a chance, and HAPPY FRIDAY! You’re my FAVORITE. 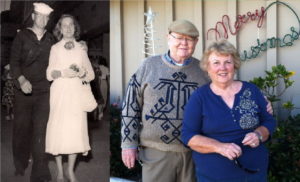 My favorite veteran, and my favorite mom. Side by side for 60+ years.