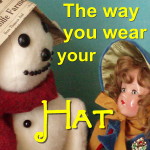 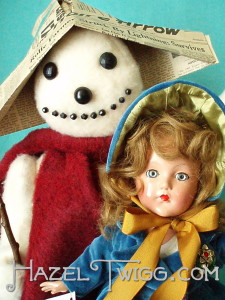 Ooh, it’s that time of year: Snow, snow, snow. And Christmas is coming! In strolled Victoria with her very pretty face and rosy cheeks. Why, she looked as if she’d been gallivanting in the meadow next door. And she had!

Meet Victoria! The Girl Who Built A Snowman In the Meadow. You can see her adoption page HERE.

Victoria is yet another Anne Shirley! I love this mold and have used it many times (do a search on this blog for “Anne Shirley” and you’ll see what I mean!). This particular girl – O.L.D. 60 – is of the 18″ variety.

Because it’s the Christmas season and perhaps triggered by Victoria’s name, I decided to create a Victorian-inspired outfit for her. And I wanted her to be doing something…wintery. Well, what’s more wintery than building a snowman? And guess what his name is? PARSON. See what I did there?

In the meadow we can build a snowman, then pretend that he is Parson Brown… 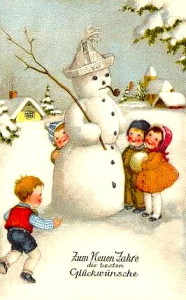 Here’s my inspiration snowman, as you can tell.

And thus begins The Snowman’s Tale: I didn’t want my snowman to be small. I wanted life-sized! Life-sized for an 18″ doll, that is. And I wanted his arms to be jointed, which meant he’d have to be fairly firmly stuffed. Readers, this portly fellow took every bit of batting I had in the house. Also, I ripped open a pillow. THAT kind of determination. I put some brown rice I had on hand at his base to keep him upright. 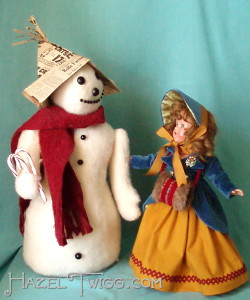 He’s holding candy canes here, but he also has a twig from my backyard. Options!

The snowman I’d chosen to model Parson was wearing a newspaper hat. Finding just the right newspaper was the very next step.

A friend, we shall call her Jennifer, for that is her name, saw that I’d used old newspapers in a previous O.L.D., and a few months ago she gave me a stack of newspapers from the now defunct Rolfe Arrow.

When I make a paper hat, I want it to be interesting. Plus, this is a happy time of year, so I want no depressing stories. I did several different tries, but you can’t always pick which headlines and articles will land where. Finally, I found the one that I wanted. It was from 1967. Here it is. I bet you can guess why someone saved it: 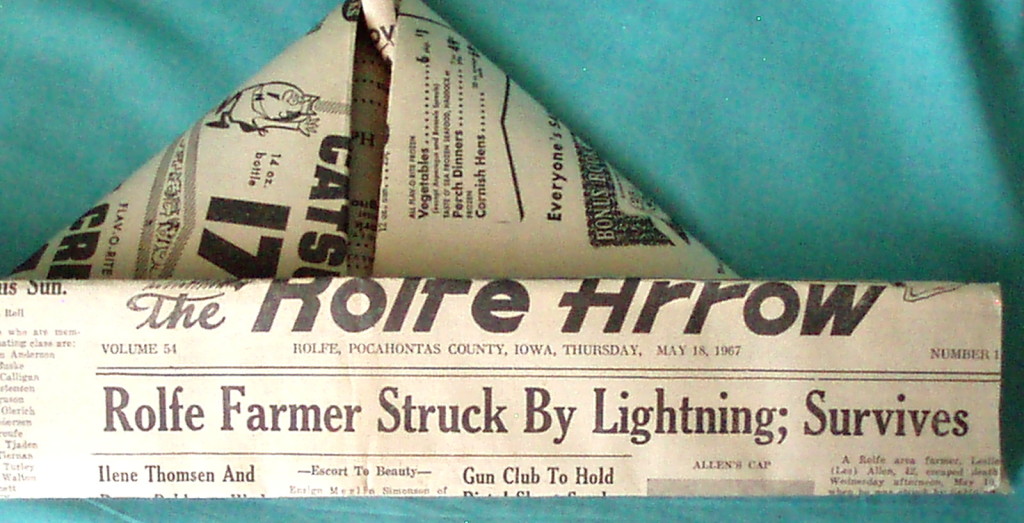 A happy story! I mean, it doesn’t seem like it at first, but it is in an unusual way! Plus, I love that it mentions Rolfe, which besides being my home is the town that Reliance in Hazel Twigg is based upon.

I was in a rush so didn’t read the article. I did happen to notice that on the inside of the hat there was a picture of the fortunate man’s unfortunate hat:

WHOA. And he LIVED.

Back to the snowman’s tale: the night before last I was at a friends barn with some other friends, including of course The Mayor. This is no ordinary barn. It’s filled with hunting trophies, memorabilia from old Rolfe, and all sorts of nifty things. Everywhere you look, there’s something to see! Except for its size, it’s very un-barnlike. It also had heat, and most importantly for that fine evening, a big screen TV. The Iowa Hawkeye game was on! 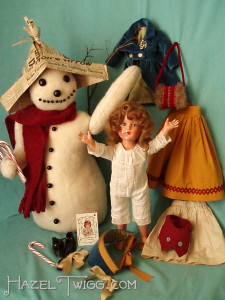 We were all talking, as people do, and my current doll came up in the conversation, along with her companion and his unusual hat. Well, guess what: IT WAS THE HOST’S OWN FATHER. Not only that, but framed up on the wall, surrounded by yellowed old newspaper clippings, was that very same hat. In the flesh – or the cloth, as it were.

So our little Parson – who is very big to Victoria – will be coming with a little bit of history of his own. And that is Parson’s Tale.

Raven, who was O.L.D. No. 59, never got her just dues! I had a post written in my head (Everybody Loves Raven) and everything! I just got too far behind to catch up. Luckily, she ended up in good hands: Michelle E. of Colorado! THANK YOU, Michelle!

And with that, I leave you! Happy Monday Eve, you’re my favorite.