The Girl Who Wanted To Happily Wander 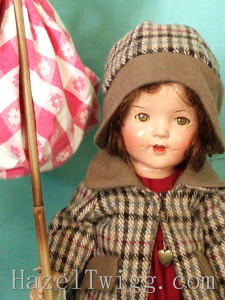 I love to go a-wandering

Along the mountain track
And as I go, I love to sing
My knapsack on my back

The chorus is actually “Valderi”, but O.L.D.’s name is “Valerie” and we both love that song, so…Meet the “Happy Wanderer,” Valerie! You can see her adoption page HERE. 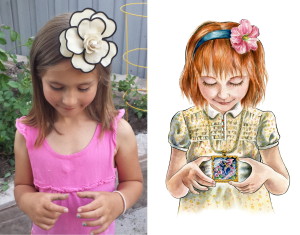 My niece Sophie was the model for our Hazel Twigg logo.

I come from a very talented family. When trying to think of an idea for the next O.L.D., I recalled a recently made short indie film that my brother Dennis had written and directed for a family film festival. The rules were that everyone working on the film had to be related, but one outsider. The film was called, “The Girl Who Wanted To Do Something Big”and it won! 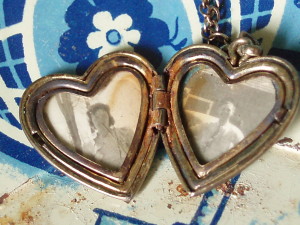 Valerie wears a tiny heart-shaped locket with photos of two sweethearts side by side.

Besides my brother writing and directing, it starred his gorgeous daughter Alexandra, her future husband Curtis, my niece Sophie, and her adorable little brother J.P. My sister-in-law Suzanne narrated it with her lovely English voice, my brother Kenny produced it, my Mom played the ukelele for the credits….and there were more! So many more. Besides being talented, my family’s very large.

I loved the style and charm of the film. It had a vintage 30s era feel to it, so I decided the next O.L.D. would be loosely based on the film. I was going to make a suitcase. A nifty cardboard one with stickers. But first! She would need a lot of clothes to fill that suitcase with. I got to work. 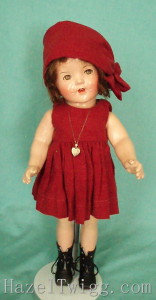 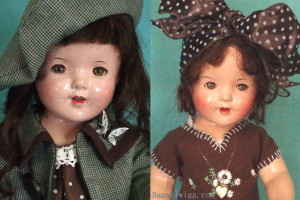 The girl on the left is pre-Hazel Twigg. What can I say? I like her in brown. It must be those brown tin eyes…

I didn’t have fabric like that used for Alexandra’s dress, but I had red! So I made Valerie a red dress with matching hat. And I added pleats like the ones on Alexandra’s dress on another dress for Valerie.

This particular mold of a doll is somewhat rare – to me, at least! In all my years of collecting, this is only the second time I’ve seen her. She’s unmarked and unknown.

I based the red hat on this old pattern. So many more to try!

I soon got so carried away making clothes for Valerie that I ran out of time to make the suitcase! So we contented ourselves with a “Wandering Stick” instead. 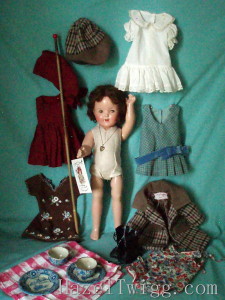 A coat, two hats, four dresses…no wonder I ran out of time! And I wanted to make so much more…

Ah, well. Let us hope that once she gets to her destination, she stays put.

Speaking of destinations, guess where May Flowers went? You guessed it! Probably. Most likely. Colorado and Michelle E.! The battles continue and I fiercely love and root for all my warriors…Thank you, Michelle!

Posted in Lost Dolls | 10 Comments »
Tags: The Girl Who Wanted To Do Something Big, The Happy Wanderer