Pink! Salmony Pink, THAT was the answer! Not green. Not for this girl! Not for Sunny Joy.

If my brothers and others want to know what takes me so long to make these little outfits, it’s this: Not only do we occasionally pick out the wrong colors and fabrics, sometimes it takes several efforts to get the style that one envisions.

Take Sunny Joy’s hat. I spent all day on her hat. Why? I couldn’t get the brim the way I wanted! I wanted it to be wide, but swoopy, and it had to conform to the crown!

I made attempt after attempt, and it’s no good just holding the freshly cut pieces on, you have to stitch them, clip them, turn them, press them and attach them. And then look! And then when it still isn’t right, *unpick!

These are just some of the failed brims! Dot marvels at the attempts. You’d think it would be simple, but no! I finally found the right formula and made a pattern. It’s around here somewhere…but at least I already have SJ’s hat!

“You could just use basting stitches,” I can hear you sniff.

Hmpf! No! That would be like walking a tightrope with a net and I’m a sewer thrill-seeker!

But I finally got it right. Then Sunny Joy picked out a costume jewelry ring for her hat decoration. I protested that it was too big, that it was almost as big as her face, but she insisted! And who could resist a girl like her? Who could say no to that face, I ask you? I broke off the ring part and stitched it on. 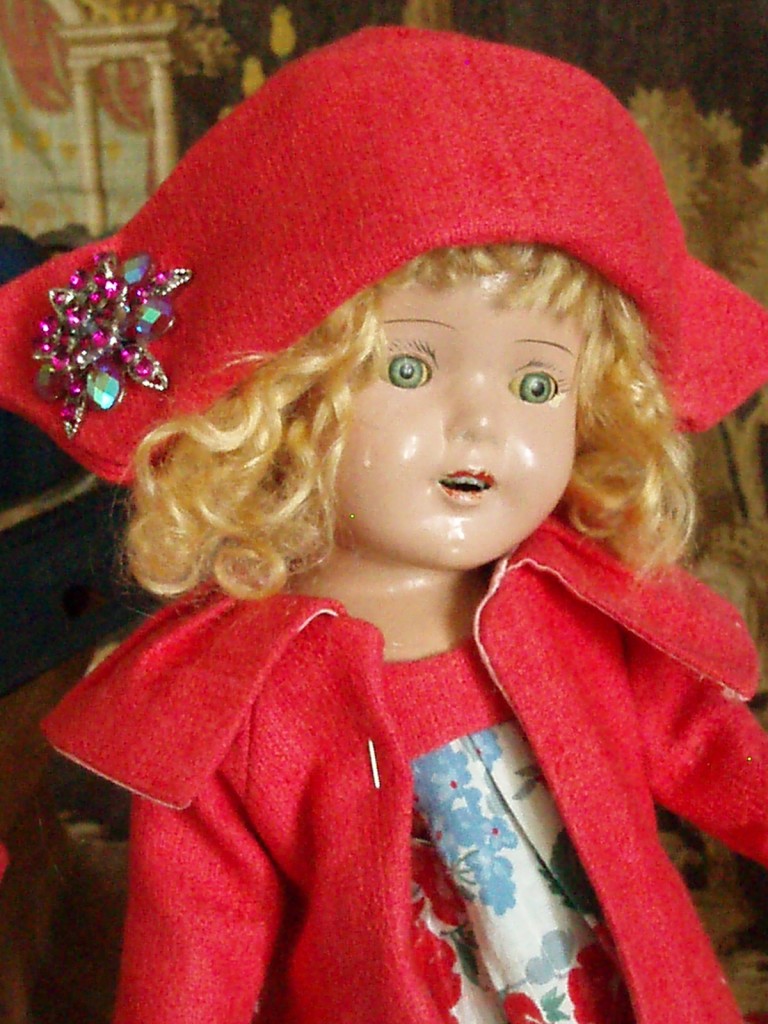 MID-AFTER. She still needs her trim work and accessories. Shoes, socks, and we’re going through a vintage hankie and purse stage. Plus, she needs her lips touched up and I filled in a chip near her eye that also needs a dab. But then! THEN, she’ll be done!

Now it’s time to finish her outfit. I have learned my lesson. It cannot be pink shoes, pink buttons, pink everything else. I learned from the green fiasco of the outfit before. The day before yesterday as I was coming home from the grocery store carrying two gallons of water like the milkmaids of old, it came to me. I knew exactly what color to use as a contrast.

And tomorrow, heaven willing and if things turn out as I plan The First Time around, Sunny Joy will be ready for the Portal.

The WRONG Nearly After BEFORE.

Carol Jane (The First!) was adopted by Anne S. in Tennessee! Wonder if she’ll get an accent? Anne sounds very friendly and I’m certain that C.J. will be very happy. We said our goodbyes yesterday morning. Safe flight, Carol Jane!

*In looking for a photo of un-pickers for my gallery picture, I found the one I used from a blog in England called “sewcurvy” (she makes corsets). With it she had the following quote, which I though was brilliant:

“A good seamstress is best friends with her seam ripper. Not because she can’t sew, but because she’s probably a perfectionist.”

Hah! You wouldn’t think it to look at me, but I’m a perfectionist! Who knew?!