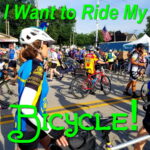 A.k.a. The Register’s Annual Great Bicycle Ride Across Iowa.

FROM THE WEBSITE: RAGBRAI is an annual seven-day bicycle ride across the state.  Heading into its 48th year, RAGBRAI is the oldest, largest and longest multi-day recreational bicycle touring event in the world.  Des Moines Register Media has been the title sponsor of RAGBRAI since 1973.

Every year, the route is slightly different. This year, RAGBRAI came through Rolfe!

This is only the second time they’ve come directly through my little town in the 15 years since I’ve lived here. The first time was 15 years ago. In a way, yesterday was possibly a last in a lifetime event for me. Who’s to say I’ll still be alive for the next one?

It takes months of preparation, and the closer it gets, the louder the buzz of excitement in the air. Giant bicycles someone made appeared throughout downtown to mark the event. I went out in the calm of the day before to get photos.

Picture it: You have a town of about 500, give or take. Suddenly, a crowd of 20,000+ people on bikes comes riding through. It was WONDERFUL. To watch, that is. My bum hurts just thinking of doing it myself. I would have been content just sitting on the curb, conspicuously eating ice cream and shouting, “Buuurrrrn!!” as the skinny little munchkins went whizzing by. This is what will contribute to my early demise, I suspect.

But I didn’t sit on the curb (there isn’t one), or eat ice cream (I don’t have any). Like a proud citizen, I mowed and weed-whacked my lawn the night before so it would look its best. In the early morning, Julie came over and we sat on my porch to wave and wish the riders a hearty “Good morning!” and “Welcome to Iowa!” because people come from all over the world for this ride. Insane people, but people nonetheless!

Julie went home to wake Scott. I went inside to put on a bra (wouldn’t want to excite the masses) so I could venture out into public and take a few pictures.

It’s one thing to see 10 or 20 bikes at a time go zipping by from the narrow vantage point of your porch steps. When I went to the corner of my street and looked toward downtown, my jaw DROPPED. I’d never seen anything like it! MASSES!! Masses of humanity! There was music playing and tents set up and delicious smells of various foods. Totally worth putting my bra on for! I traipsed downtown to get more photos.

The race always takes place in the last week of July, which is frequently boiling hot. This time, the weather was GLORIOUS. A high of 81, with lows in the 60’s and a beautiful, sunny day.

You can imagine what a boost it is for a small town like ours to have that many people coming through. Besides all the vendors, several enterprising folks and small organizations set up shop. A ladies organization – and I speak from personal knowledge when I say they do wonderful things – baked dozens of pies. They sold all 750 slices by 9:30 in the morning!

My enterprising neighbor Nikole raised money by selling brownies. She’s also fortunate enough to have the best and only hill in Rolfe, and she wisely used this to her advantage, laying down a huge white tarp complete with a hose to water it down. The words “Brownies!” and “Water Slide!” were ringing out through the morning. There were a LOT of happy customers! Even in nice weather, biking an average 67 miles a day, one would tend to get hot!

It was a circus! It was a carnival! It was a mini-Olympics, all rolled it to one. And then, POOF! It was over. Julie and Scott drove through town in the aftermath. I expected to hear reports of lots of trash and water bottles left behind. Nope! Everything was clean, everything was gone, as if nothing had happened at all. But it did. I saw it! And it was WONDERFUL. A huge thank you to all those who made this event go so smoothly.

And with that, I leave you! May you find a bike with a comfy seat. May we all! Because you’re my favorite. 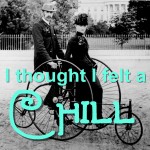 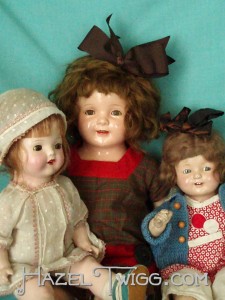 In this picture, Autumn is paying homage to Dot with a hair bow of her own.

Well, not really. Not the season, at least – not for another two months and two days. However! Autumn the next O.L.D. is here!

On a day in a summer that has been unusually mild and even a little chilly in the evenings, not to mention the first day of RAGBRAI, today happens to be a tad hot and moist here in Iowa. 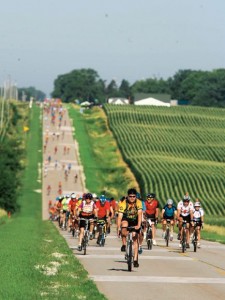 What is RAGBRAI, you might ask? Well, here you go:

RAGBRAI is an acronym and registered trademark for the Register’s Annual Great Bicycle Ride Across Iowa, which is a non-competitive bicycle ride organized by The Des Moines Register and going from west to east across the United States state of Iowa, that draws recreational riders from across the United States and many foreign countries.[1] Held beginning in 1973, RAGBRAI is the oldest and largest bike-touring event in the world.[2]

It’s gone through Rolfe once or twice and is kind of a big deal, almost like having the Olympics come to town, and it lasts a whole week. Lance Armstrong, love him or hate him, rides pert near every year! This year I happen to know a couple of people who are going part way. Good luck, people I know! You know who you are. 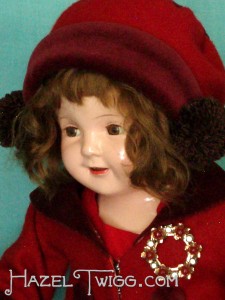 But now! Back to cooler climes and cooler times! Autumn is a 21″ composition/cloth doll that I believe was made by the Perfect Doll Company, even though she is unmarked. Because, see? I’ve had her mold before and it’s one of my favorites. What a difference hair and eye color makes!

The girl on the left was here and gone long before the Hideaway came into play. I confess to having fond memories of her. So much so that I channeled her dress a little when making Autumn’s clothing. 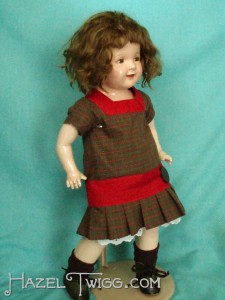 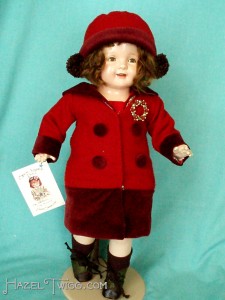 Even with the time that’s passed, the sentiment behind the clothing and the dolls are the same.

Autumn’s day will be here before you know it. In the meantime, you can see her adoption page HERE.

And just like the season for which she’s named, she looks good coming and going. And then it’s Winter’s turn… 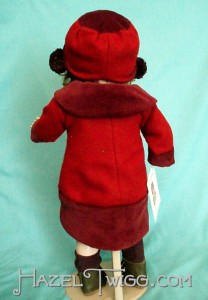 Until then! Bikers gonna bike. 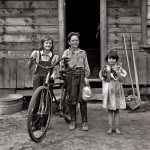