It’s Only A Flesh Wound! 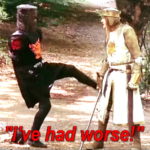 Over the years, we’ve had all sorts of knocks at our front door when it comes to the Once-Loved Dolls. Shy ones, eager ones, soft ones…So I KNOW my knocks!

But this one I confess scared me a little. It made me jump! Because I could tell this was not a knock. Someone was kicking at the door! And they sounded almost…angry. Still. I’m much bigger than they are. I flung open the door to give our latest O.L.D. what for, when to my surprise I saw the jolliest face I’d seen in a long time! Then I started laughing. She wasn’t angry, she was excited!

I was right about the kick, however. As with most dolls that started out with magic skin arms, the “magic” had long since disintegrated…

Thus begins the description for doll No. 124, “Flossie the Patriotic Summer Drummer.” You can see her description HERE.

“Flossie” is this doll’s given name straight from the manufacturer. The Ideal Toy company made her, and although she is not marked, her face is unmistakable. She measures 18″ tall.

I love Flossie Flirts! So named because not only do their eyes sleep, they move side to side. In addition to these flirty eyes, many of the Flossies had a new feature: soft rubber, aka “Magic Skin” arms and sometimes even legs.

Think of it! For the first time, dolls had limbs that weren’t hard and unyielding, these you could actually squeeze! They were soft, and you could bend them! I remember my mother telling me about how exciting it was when she and her sisters received dolls with this wonderful new skin that felt so real.

Unfortunately, the new skin didn’t age well. The rubber would either shrivel or disintegrate, so frequently in this day and age, if you’re lucky enough to get a sweet Flossie Flirt, nine times out of ten she’ll have arms and occasionally legs that are misshapen or missing altogether. Such was the case with our Flossie. Hence the kicking at the door. It’s hard to knock when you don’t have any arms!

Thank goodness for the Givers! I found a pair of arms for Flossie that would do.

Since she now had arms, by golly Flossie wanted to use them! What better way than as a drummer? Since it’s summer, why not a Patriotic one? Thus the “Patriotic Summer Drummer” was born. And she has arms that, while they’re not squishy or bendable, will last her a very, very long time.

Fortuitously, HyVee had a “Summer Snack Sale!” Flossie’s drums are made from the bottoms of three Pringles potato chip cans. Urp. How I suffer for my art…

Finally! My first dip back into the pool after a bit of an absence. Summer’s almost over, school’s about to begin again. I’m swimming in earnest now, just you wait!

Many moons ago there was a Flapper named Marilyn. She has already spent a languid summer in Portola Valley, California by now and I’m sure feels very much at home with our dear friend Linda L. Thank you so much, Linda!!

And with that, I leave you! I love you like I love fall! HARK! Is that a hint of yellow in the leaves? No? Not quite yet? Well, it’s coming! You’re my favorite!