The Princess Who Really Was 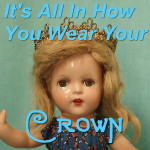 It was late at night at the Hideaway, and everyone else was asleep. At least, that’s what I thought. Some quiet sniffling sounds were coming from the closet. I gently opened the door.

She looked up at me in surprise before burying her face in her hands again. Her little shoulders were shaking with sobs now. I could see she was trying to talk, so I scooped her up and took her into the hall.

I decided that nothing but the best for her would do. Gorgeous vintage brooch courtesy of my dear friend Jennifer.

“That’s just it,” she said, once we were alone and away from the rest of the sleeping dolls. “I’m not a Princess! I’m not even a Madame Alexander! I’m a…a…knock-off!”

I paused for a moment before responding. “First of all, it doesn’t matter whether you’re a name brand or a knock-off, you know that! That’s why dolls are never told at the factory whether or not they’re a real Shirley Temple, for example. Because if a little human’s parents can’t afford the real thing, as long as the child believes – and the doll believes – that’s all that matters.”

She seemed to feel a little bit better.

“Second of all,” I continued. “You are at the very least a Madame Alexander. Either a McGuffey Anna or a Princess Elizabeth. The way you’re marked is how they were marked. Sometimes. And I can tell by your wig.” 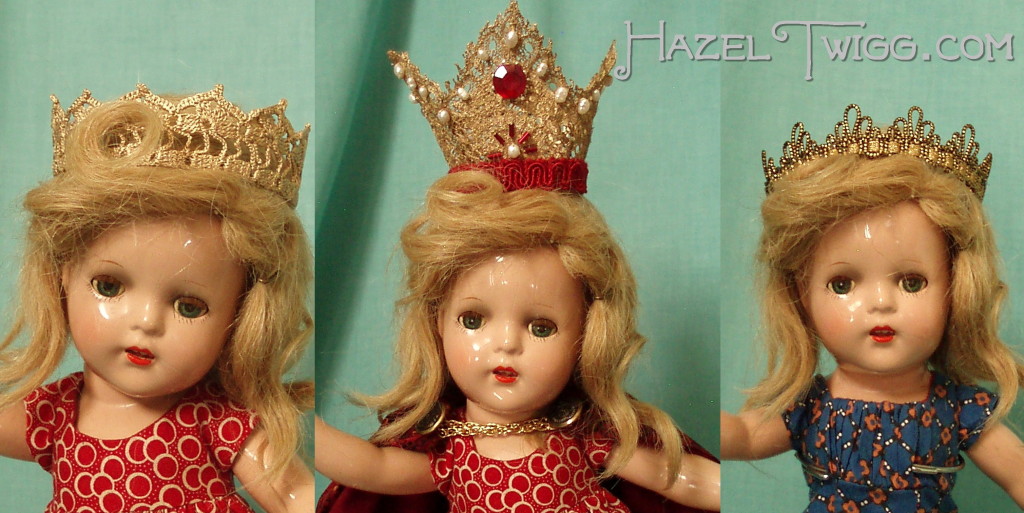 I made three crowns for her after stumbling across lace crowns on Pinterest. From left to right: 1) Every Day, 2) Official Business, and 3) for play and rough-housing. “What possible official business could a doll princess have?” you may ask. Well, this particular Princess loves dubbing things and will dub things at the drop of a hat. “I dub thee cat!” she will say. Or, “I dub thee stove!” But not to worry. She’s not obnoxious about it or anything . . .

Meet Princess! The Girl Who Really Was. You can see her adoption page HERE.

I truly believe she’s a Madame Alexander 13″ Princess Elizabeth. Regardless of who she is, I wanted to make a full complement of clothes for her:

I decided to use real fur for Princess’s coat collar, hat and muff. WHEW. Always a bit of pressure, because I don’t want to make any mistakes and waste anything. The fur I used was from a large cuff from a coat, or a human-sized fur muff. Either way, it was produced a long, long time before I was even born, which is saying something.

Another thing about Princess’s coat (besides the lovely old green velvet of a theater curtain used to make it) is the buttons. I was so happy to find six that matched! When I took a closer look, I could make out the words, “STATE OF OKLA-“. I did a little research and found a treasure hunters site where someone dug up old buttons just like these and there was all sorts of speculation because they’re dated 1807 or 1907 and “Oklahoma” is mis-spelled. Oklahoma became a state in 1907, and this is a copy of their seal, I know that much now. You learn all kinds of things working with these old dolls! Mainly, I was happy to find six matching buttons…they’re probably worth a fortune. How much fun would that be?

In other news, JULIE IS MAYOR once again! Thank you to all who voted and all who sent their good wishes! CONGRATS, Julie!

Lastly, Carmen Miranda. Her tutti-fruitiness was adopted by Hillary P. of New York, New York! Start spreading the news…a new record! Thank you so much, Hillary. To you and to all who bid, you are much appreciated. From now on, any doll going for $300 or above will receive a free First Release copy of my book. So a free book will be winging its way to the big apple! As soon as they’re ready, of course.

Speaking of Wednesday, the next O.L.D. will be up for adoption Wednesday, November, 11. Veteran’s day! I’m switching to Wednesdays at 6:33 instead of Sundays.

Posted in Lost Dolls | Comments Off on The Princess Who Really Was
Tags: Princess Elizabeth, State of Oklahoma Button