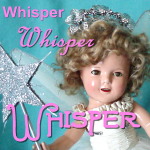 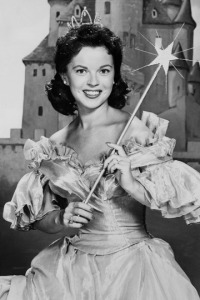 An older Shirley Temple. I used this wand she’s holding for inspiration. If you look closely, you’ll see wires “bursting” from the star. 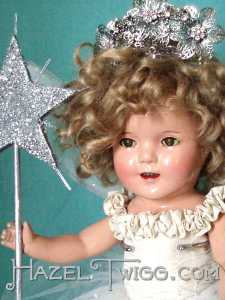 …My “bursting” wires had to be snipped and shortened when it was discovered come picture time that they poked right into her face and hair. We can’t have that!

Tis a season for miracles, and two Shirley Temples in a row is a small one. O.L.D. No. 00024 has arrived and her name is…Shirley! As all Shirley’s are. You can see her adoption page HERE. This time I let The Mayor take charge.

For weeks now, she’s been asking me to make a doll with a pretty and formal gown. “A fairy!” she cried. “Or an angel! For Christmas!” she hollered. The reason I didn’t oblige her right away, this actual Mayor for our town of *nearly* 600 souls, is because I didn’t know how to sew tulle. 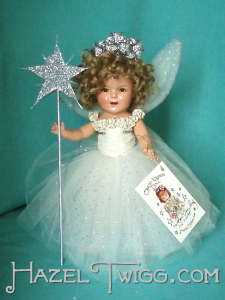 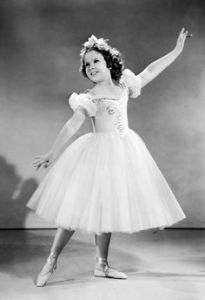 Tulle is that frothy, netty stuff that bride’s veils are made of. It was a small act of courage to stick a piece into my sewing machine and give it a try. Whatever would I do if my little machine broke? But it worked! And a Shirley Temple Fairy Angel was born. And The Mayor was silenced! For a little bit.

Shirley’s crown is made from an earring and a bracelet. It pangs me to take these pretty pieces of jewelry apart, it does. But I’ve learned to live in the moment, and the end result was worth it. Plus, I couldn’t find the other earring anyway and the bracelet was missing a stone…

If you look very closely, you can see fairies dancing around this flag, beseeching me to pluck it from the ground and keep it, Just In Case. 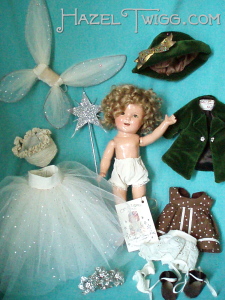 Anyone who knows me knows I love wire hangers! I horde them because I fear that they’ll stop being made. Alas! They are not perfect for everything. For Shirley’s wings I needed a less heavy, more bendable wire. Enter the orange lawn flags that polka-dotted the city a year or so ago during a large rewiring project. Turns out it was up to us citizens to remove these flags from our lawns once the project was over.

Turns out that was a good thing. I noted the nice weight of them, the sturdiness and flexibility, little knowing how handy they would come in one day to one who lives in the middle of nowhere on limited funds who can’t just run out for “wing wire,” as I call it. I spray painted them silver and voila! Wing frames!

Shirley is always a joy to work with no matter what her state. I came upon this Shirley and last week’s Shirley at the same time, took their “Before” pictures at the same time and accidentally deleted them at the same time. So this picture was taken when I’d already cleaned her very dirty face. You can see evidence of her arrival state by looking at her wig, pre-washing. Shampoo, cream rinse and rag curlers make all the difference. 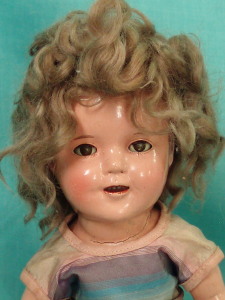 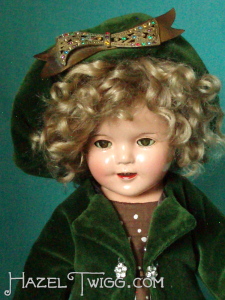 When I finally finished the fairy/angel outfit, The Mayor piped in again when I pondered what I wanted Shirley’s “street” clothes to look like. “Green!” she squeaked.

Well, wouldn’t you know? I just happened to have some old green velvet that would be just the thing!

But what about the dress beneath? Orange? Red? 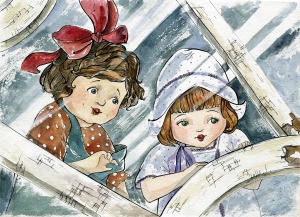 This is one of the very first images done for the first version of the book, before Hazel Twigg herself was born. I don’t think it made it into the current version. That’s Dot on the left. 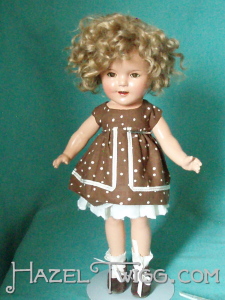 I scanned a snatch of this vintage polka-dot fabric and sent it to Nina for reference. Now Shirley’s wearing it too! It would almost be like having a teddy bear made from the original Winnie-the-Pooh fur!

“No red!” The Mayor insisted. Orange seemed too loud, so I chose brown polka-dots. The same fabric that Dot’s dress has been made up of from the very beginning.

Speaking of Dot and my book Hazel Twigg & the Hollyhock Hideaway, which is how all this started in the first place, there are exciting things afoot! I’m taking the next few weeks off to complete a long overdue task. What could that be? I mean, besides finishing the sorting of my buttons? Or cleaning my sewing room? THINK BIGGER. More info coming soon! AT LONG LAST. 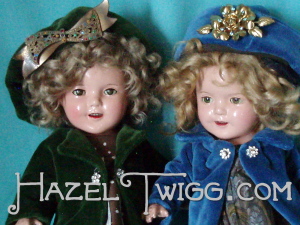 As for O.L.D. No. 00023, Santa Shirley, Michelle E. is back in action and Shirley will be making her way to Colorado.

Who will get this next Shirley? We shall see! You can never have too many Shirleys!

And you can never have too many friends. I hope your Christmas season is going well, even as it goes too fast.