In Pursuit of LIBERTY 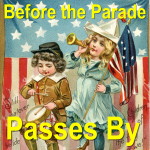 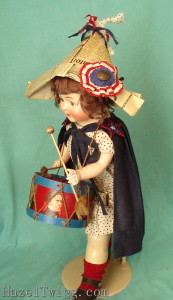 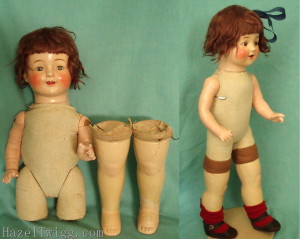 There’s nothing I like more than doing a patriotic doll – especially when the 4th of July is just around the corner! So when this sweet girl crawled in and told me her name, I knew she was the one. I didn’t care that her arms were in terrible shape! Not to mention the fact that she didn’t have legs at all….

As Magic Elizabeth, I’d done several patriotic dolls in the past:

I was using a different color background fabric then.

This time I wanted to do an earlier era version of a patriotic doll. Something from around, say, 1912 or so. One of my favorite years because of the Titanic. I searched for inspiration…

At first I was going to make a gourd-like hat like this one. But then I decided it just wouldn’t compute in a photograph. 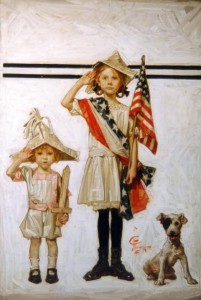 A dropped waist dress! A newspaper hat! PERFECT. She should march in a parade. But what should she carry? A paper sword to go with the hat? Too flimsy. Some kind of firework? Too dangerous! A DRUM. I knew I had one around here somewhere…. Apparently, I’d given it away. I should make one! But how? Then I saw the picture below of a boy marching with a drum made from an oatmeal container.

“Hmm,” I said to myself in my lilting,  musical voice. “The little boy is carrying the drum sideways because proportionately it’s too small for him to use upright. But, ooh! The size of an oatmeal box is just right for a 21″ doll!” 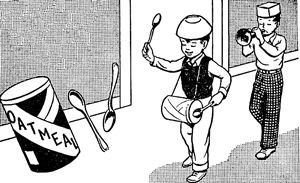 I went to work on Liberty’s outfit. At first, I tried using a recent local paper to make Libby’s hat. Too new! It didn’t look right. I knew I had a reproduction  of the 1912 New York Times announcing the Titanic sinking somewhere. Maybe I could somehow age it with tea and *gulp!* cut that up instead. I headed to my attic. I didn’t find the Titanic newspaper, but I found a treasure trove of other things. Amongst them some 1970’s editions of the “Rolfe Arrow,” our former very own town newspaper that is now defunct. I also found a 1965 article listing all the U.S. presidents to that date. Both items were already nicely yellowed with no effort from me.

Lastly, I found an old flag that I’ve been packing from house to house for years. I counted the stars on that flag. There were 48. I did some research to discover at what point in time there were 48 states. 1912. That’s the year I was aiming towards! It was meant to be. 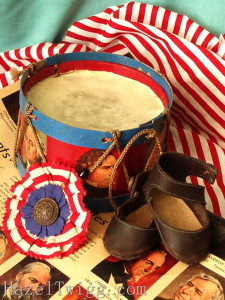 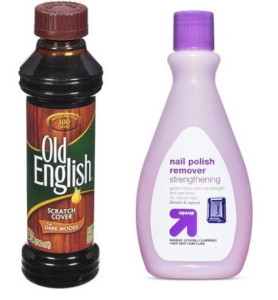 You can’t tell, but on the medallion (that’s the red and white striped round thing) I made for Libby’s hat I was able to reproduce foxing. Unintended handy tip: I discovered that if you put a few drops of Old English furniture scratch cover into the tea dye, the oil in the solution won’t allow it to blend with the tea. At first, I was dismayed. Not an overall slightly darker tone, as I had hoped. Instead, there were random brown spots. But then I realized: Foxing! Excellent. 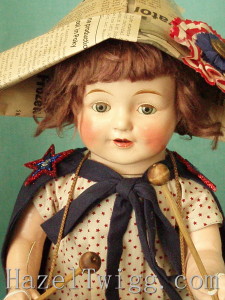 I also took a leap of faith with Libby’s shoes. The brown leather I had on hand was too shiny. So I made the shoes, and then I took sandpaper and fingernail polish remover to the leather and scrubbed away. Phew! It worked! 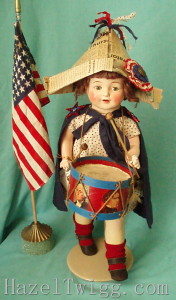 I hadn’t quite finished putting the flag pole together when I took this picture. 6:33 waits for no woman!

The entire time I was creating Liberty’s outfit, I was channeling a busy but good mother, whose little girl wants to have a parade. She certainly wouldn’t have worn her best shoes, newspaper hats were all the rage, and her cape would be light cotton, because it was July after all.

It took a lot of trial and error and figuring to make that drum. But it all worked out in the end! And now Liberty can proudly march down the street, an instant parade wherever she goes.

Speaking of the 4th of July, because the weekend after this will be a holiday weekend, O.L.D. No. 46 will begin July 5 at her usual time of 6:33 instead. Right now she’s a twinkle in my eye. A prancing, enthusiastic twinkle she is indeed….

Our sleuth Irene is headed to….Colorado and Michelle E.’s house! A huge thank you to all who bid, and thank you Michelle for giving her a good home!

With that, I leave you! Happy FRIDAY!!! You are, of course, my favorite.