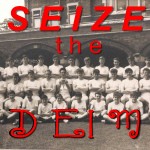 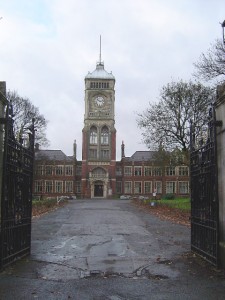 See those black doors? If you went through those and to the left, I’d be right there, manning the PBX switchboard. My Dad got me a job as the campus operator. I felt so badly when I was late.

As I work on final, final, final edits for Hazel Twigg & the Hollyhock Hideaway (and believe me, I could edit and change things until the cows come home) while waiting for the website to be completed, I wanted to reflect a little on the past and on how very lucky I’ve been. 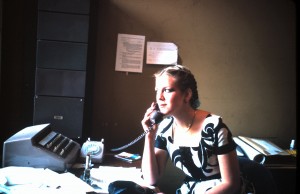 There’s me switchboarding, using the same photo I used to kiss that cranky Batman. I loved that dress. It was black and white and a hand-me-down from my sister January. I would frequently ask my mother to French braid my hair.

I’ve been part of a family that’s lived in some unusual places.

Isn’t it a downright shame that we didn’t know then what we know now? My family lived in England for a total of five years, but I only lasted six months! I got terribly homesick and since I’d just turned 18, I decided to move back to the states.

Look at the church! You can’t see it, but it had a black and white checkerboard floor. It was an eerie place with plaques dedicated to boys who had died.

And of all beautiful places to live! The former Royal Masonic School for Boys, sometimes referred to as “The scariest building in Britain” and used for several movies, including “Monty Python’s Meaning of Life,” “Raiders of the Lost Ark,” and even “Harry Potter,” for crying out loud!

The year was 1980, and the school had been turned into The International University-England. My Dad was Bursar (the money guy).

Sometimes you just can’t prepare yourself, although I thought I had!

When I found out we were moving to England, setting for my favorite novel, Jane Eyre, I imagined myself sitting on the moors, strumming a guitar and singing “Mull of Kintyre.” I figured it was a pretty realistic scenario, after all that song, whilst hauntingly beautiful, was only two chords. I went out and bought a guitar and set about making my vision come true. Moors, here I come! “Jane! Jane! Jane!” “Mr. Rochester!”

“Go ahead and woo her, Mr. Rochester. I’ve got you covered.” Ahem! “Mull of Kintyre, Oh mist rolling in from the sea…”

Sadly, I couldn’t get past the blisters. The lovers would have to do without my magical accompaniment.

The courtyard was beautiful. And huge. There were two sidewalks that formed a cross straight through the middle, otherwise you had to walk aaalllll the way around to get from one place to another. We were told time and time again, “Stay off the grass!”

I followed that edict religiously, and it drove me wild when anyone would disobey, trampling that innocent, beautiful, pristine grass as if they owned the place. The worst offender was my brother Kenny. “KENNY!” I would yell, me being the big sister and all, “GET OFF THE GRASS! YOU’RE NOT SUPPOSED TO WALK THERE!”

Nothing phased him. Not even my scariest voice. He finally turned to me once and said, “Why? It’s just grass.”

That stopped me in my tracks. For some reason the grass had morphed for me into something fragile and practically sacred. But it wasn’t. It was just grass.

Turns out my brother was right. Years later: 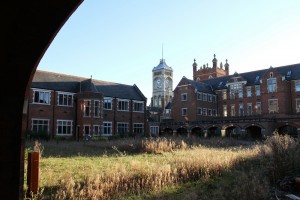 The was a hue and cry when the school was going to be torn down. It has since been turned into luxury apartments. Luxury modern apartments. The quaint and magical interiors are gone. But they were there, and we were there, and I have learned that grass is grass.

And that learning to play guitar, even for a song that’s only two chords, is hard.