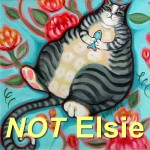 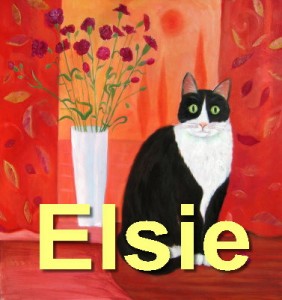 Yesterday my cat Elsie was hit by a car. And I shall miss her.

So yes, this is an ode to her. But it’s also a thank you to my kind neighbors.

You might think it is a not appropriate thing to write about the burial of a cat on Memorial day. I shall segue it thus: My father was a Navy man. My brother wrote a beautiful tribute to his service in the Navy HERE.

One of the few times I ever saw my father cry was when he returned from a business trip back when I was a teenager in Cedar City, Utah.

He’d been seated on the plane next to this woman who had recently lost her cat. And in retelling the story, my father cried. “She really loved that cat!” he said, wiping his eyes of uncharacteristic tears. Granted he was tired. But he understood, even though he was not a pet person. And I think he would understand now.

I have had Elsie for almost seven years. Here in Iowa, we have many riches, one of the chief amongst them being the ability to pluck little kittens right off the street! Hence the constant need to fight becoming the Cat Lady of Rolfe.

That long ago spring, my sister Julie informed me they had a mother and her kittens living in one of their little outbuildings. 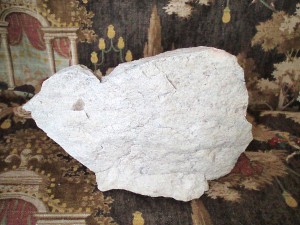 We approached the building. The mother cat, seeing us, ran away. We looked at each little kitten one by one, and I picked out Elsie, a pretty black and white “tuxedo” cat. She was far too tiny to take right then, so we said our goodbyes and left.

That was one good cat mother. She moved her kittens away and I wasn’t sure if we would ever find them again. But several days later we did! Or rather, Julie did. They were at the side of an abandoned house. When a week had passed and it was time, Julie bravely made her way through the overgrown bushes, picking out the distinctive cat with the white just so over her eye and the little black dot on her nose, and that was that.

I held her tiny body right here at this desk as I soothed her. She was so scared! As was only natural, as you can imagine. But winters here are very hard for outdoor stray cats, so in a way I rescued her. She rescued me back, many times.

Elsie was affectionate enough, but what I loved most about her was that she would follow me everywhere. She would rarely beg for pettings (although she got them plenty), she would simply lie at my feet wherever I was in the house. It was as if she just happened to be going the same place I was. At the same time. And it was oddly comforting to have her there. 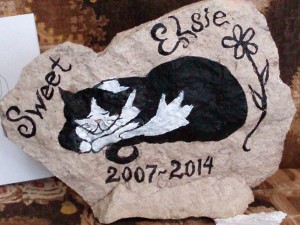 She was my snacker and beggar of milk. My other cat Lily is as fat as a folk art cat, but Elsie is the one who would beg for milk and treats. Of course she got them! It is Elsie’s tiny green footprints that are on my dining room floor from the time I thought it would be a good idea to paint my kitchen floor (long since stripped and stained).

So, yes. I shall miss her. But at the same time, I am grateful for good neighbors. First for the one who saw it happen and who kindly came and told me, which is not an easy thing to do. 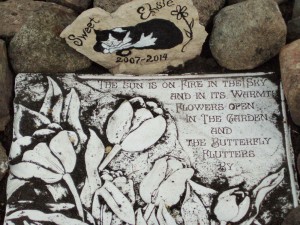 Second, I am grateful to my other neighbors across the way, a wife, a husband and their toddler son. The husband  went and checked Elsie for me, lying so pristinely in the street as if she were only sleeping but not responding to my calls. He gently picked her up, confirming my fears and took her at my request to my other house behind me. Julie and Scott pulled up as he was getting a spade, I fetched my two shovels and together they dug as I cried and went back and forth trying to find my other cat Lily and tried not to look at Elsie my love.

There was even a funny moment, although I didn’t hear about it until later and didn’t smile about it until then. The young toddler was right by Elsie’s side the entire time preparations were being made. Julie later told me that his mother confided how happy he was. Because he had desperately wanted to pet a cat, but none would ever let him. Elsie did! So he was happy as a clam, and petted to his heart’s content. 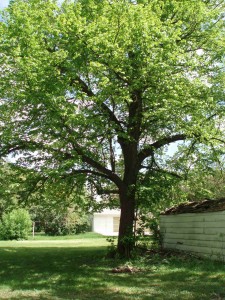 You can just see the rocks at the base of this lovely tree.

Well, one takes one’s smiles from wherever one can.

My sketch for the stone.

We found rocks to put on the grave and a plaque from my garden at Julie’s suggestion. I noticed that one of the rocks was not only nice and flat with a base to stand upon, it was shaped like a cat! So I painted it. And there she lays. And I shall miss her. And I’m thankful for so many good people.

Now to search the streets once again. 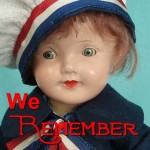 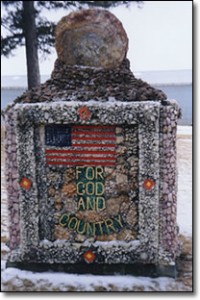 This marker is one of the few remaining remnants at the cemetery of Old Rolfe.
Photos credit to Rolfe, Iowa website, rolfeiowa.com 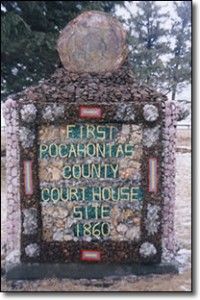 It was built by Father Doberstein, creator of the “Grotto of the Redemption” in West Bend, Iowa.

Memorial Day is a day to remember all those who died while serving in the United States Armed Forces. And we do. We surely do.

Rolfe’s current cemetery, Clinton-Garfield, is ablaze with flags and flowers. It’s a wonderful sight to see.

A heartfelt Thank You to those who gave all.