We Need a LITTLE CHRISTMAS 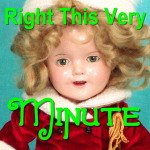 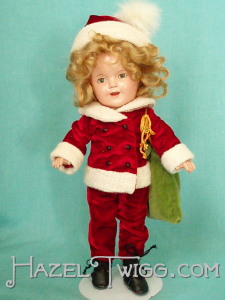 At 13″ this Shirley Temple puts the “Little” in Christmas. Good things come in small packages!

I’ve said it before: while other dolls may receive other names from their little humans, 99.9% of the time, a Shirley Temple doll will always be named Shirley Temple.

So without further ado, meet Shirley Temple! O.L.D. (Once-Loved Doll) No. 23. You can see her adoption page HERE.

I confess, I didn’t see this picture of Shirley Temple as Santa Claus until just last night, unfortunately. Do you see that fur around the bottoms of the real Shirley’s pants? Wish I’d thought of that! You’ll soon learn why.

Believe it or not, it takes me all week to do a doll. To clean her and do any repairs and then make two outfits plus accessories…Therefore I wanted one pair of shoes, which I also make using my stash of different colored leathers, that would work with both outfits. Black boots were required, because we decided Shirley should be dressed as Santa. It’s pretty hard to make boots that work with a dress! 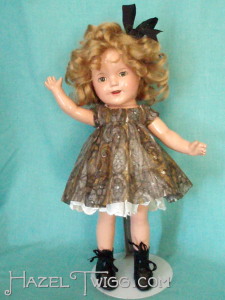 Then I saw this picture of Shirley Temple from “Little Miss Marker.” It’s reportedly her favorite photo from her movie career. Yes, she’s wearing shoes and socks rather than boots, but the effect is the same and I liked it.

My plan in place, and with Shirley’s enthusiastic agreement, we went to work. The Santa pants would tuck into the boots and blouse over nicely and the boots would look good with this dress. Perfect! 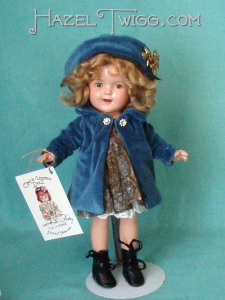 Here she is in her blue velvet coat and hat. Between that, the green velvet Santa bag and the red velvet Santa suit, it’s a wonder her name isn’t Velveeta. 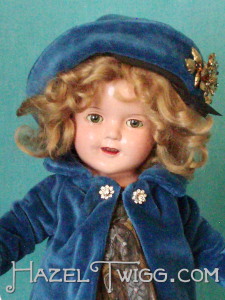 But guess what? Turns out, if you make boots to fit snugly around a little girl’s ankles, they will NOT go around velvet pants! Oh sure, it seems obvious now…

If I have time, I’ll add some cuffs to the Santa pants, although I’m currently hard at work on the next O.L.D. She too will be adorable (I hope! I think!).

TRIXIE! Ah, Trixie. I was right, she was not everybody’s cup of tea and went for a song. The good news is that my sweet sister Carol, who lives in Arizona, was able to adopt her. Every now and then she bids when there’s an O.L.D. she likes. See? So there IS someone for everyone! And a bargain to boot! But JUST YOU WAIT: 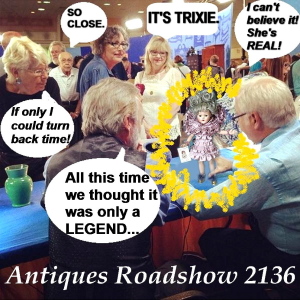 And with that, I leave you. Merry Christmas! I’m going to be saying that as often as I can, because with the luck of the draw (and the calendar) this will be the second shortest Christmas season on record, darn the luck. Happy Wednesday! You’re my favorite! 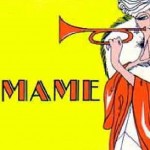 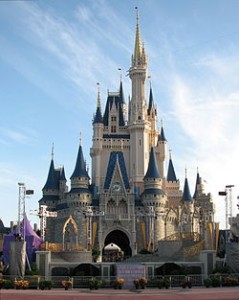 One of my fondest memories is being awoken by my Mother singing,

This is the day we’ve waited for!

Always a treat we have in store! 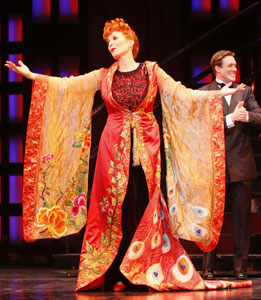 And I would wake up in an instant, full of bliss, knowing: The Day had finally arrived! With my Dad’s love of theater and music, there was broadway:

Get the ice out!

Roll the rugs up!

And the excitement would be ratcheted up that much more. 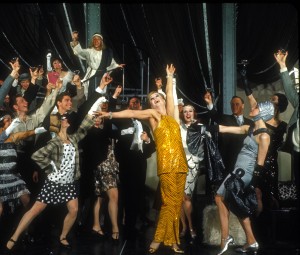 So to the sleeping citizens of Reliance I lightly sing to you whether you know it or not, because today for me is a celebration: It’s my baby’s debut into the world. Not Adam, the other one: Hazel Twigg & the Hollyhock Hideaway.

Whether it’s to three people or 11, I’ll be introducing my book and some of my dolls this morning at 10:00 o’clock at the Rolfe Library.

To me it’s The Beginning and I am so excited that last night I had a hard time getting to sleep. Aren’t I silly? Why, yes I am! 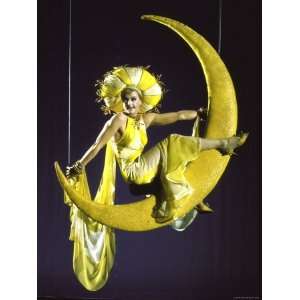 Though it may not be anyone’s birthday

And it’s far from the first of the year

I know that this very minute has history in it

Wish me luck! Or, as they say on Broadway, “Break a leg!”