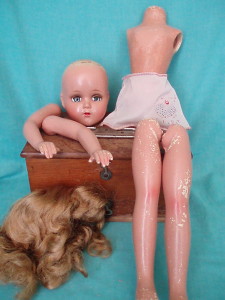 Flaky skin. It’s not just a human problem, you know. Poor, sweet Lauren had it in spades. A previous owner had tried to fix it, leaving a thick, gloppy mess that’s hard to see in this photo. 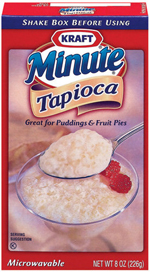 The BEST stuff on earth! Am I right?!

I confidently took her parts in my hands and set about to removing the offending paint, smug in the fact that I would have no problem. No problem at all.

WRONG. It was tricky! For the first time, I wished I owned an air brush. Instead, I use the “tap” method. And when I do, a distantly remembered song comes to mind. I discovered it was from the movie, “Thoroughly Modern Millie,” starring Julie Andrews and Mary Tyler Moore, and it’s called “The Tapioca.” I don’t know all the lyrics, so I just sing the ones I know as I work.

My life is a musical. 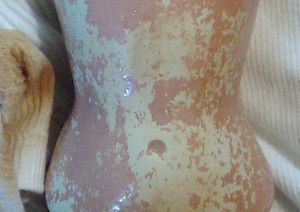 This is midway, after I removed the previous repaint. 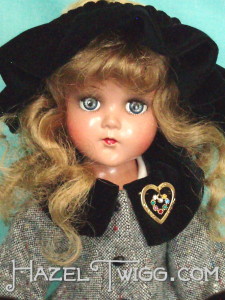 Tapping the paint on with my hands rather than using a brush means I won’t have brush strokes on a girl’s skin. Lauren looks much better. Thankfully, her face was just fine. 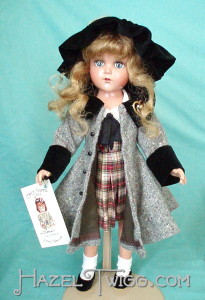 Lauren is O.L.D. No. 12 and she was put up for adoption as of Sunday, 6:33 Iowa time. I’ve decided that’s when all the Once-Loved Dolls will go up for adoption, because 33 is my lucky number, and my Dad’s year of birth. You can see Lauren’s adoption page HERE.

I’ve dressed Lauren in 40s style clothes. The wool for Lauren’s coat was given to me by a formal local fairy named Beth who has since flitted off to Colorado. Beth, if you see this, thank you!

I also got a chance to use this strange curved cording I had that I didn’t know what I would ever do with. A black velvet ruffle open crown hat! This is why you never throw anything away!

There must be something in the water in Colorado, because both SHIRLEY and BRIDGET were adopted by a lovely woman who also lives there. We shall call her “M.” Bridget is on her way as of yesterday.

And now! Once more into the breach!

“Miss Eliza Bennett, let me persuade you to follow my example,
and take a turn about the room. I assure you, it is very refreshing…”
– Miss Bingley, “Pride & Prejudice”

“Ah, Spring! When a young man’s fancy turns to love!” Or not. Finding romance in a small town is not as easy as one would think. The following is something I wrote to a friend when there was the slightest hint of a hope of romance in the air:

The man I adore – we shall call him Mr. Rochester – bought some land! He probably purchased it so that he can build a home he feels is worthy of me with his own two hands, and that’s why this whole romance thing is taking so long. The pace here in Reliance makes Jane Austen look like a loose woman!

There was an open house where I work. We had wassail and coffee and cookies and a meat and cheese platter and crackers and of course, free calendars. We were supposed to dress up so I wore my swoopy skirt that I love so much and a knit top beneath a velvet jacket I’d purchased at a thrift store and hadn’t worn yet (it still had tags!). It has a faux fur collar and the sleeves flair out ever so gently at the wrist.

Perhaps not THIS swoopy…