Clean Up Days to the Rescue! 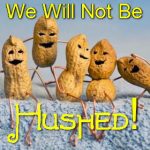 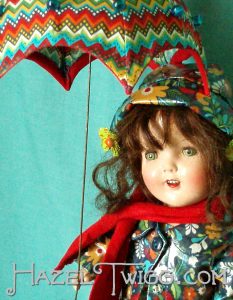 It was obvious that the little girl standing in front of me had been subjected to a composition doll’s worst enemy next to water: FIRE. I immediately got to work on her, only remembering to take her “before” pictures halfway through. Her poor sooty skin was flaking off into my hands.

The fire, the fact that Iowa’s spring has seen a lot of rain, and the additional fact that this little girl’s name was Taylor all led me into the direction of O.L.D. No. 71 Taylor’s theme: Fire & Rain, based on that wistful James Taylor tune. It’s all well and fine to have a vision, but getting that vision to actually work is a different story altogether… 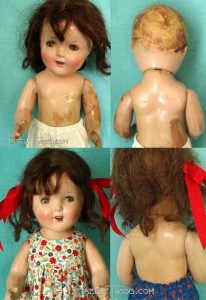 It’s a good thing I have a sense of humor! And a very good imagination. I was cackling to myself these past two days as I tried and tried over and over to Get The Umbrella To Stand By Itself.

“She makes everything look so easy!” the voices in my head from the constantly present audience teased, as I failed for the umpteenth time and the umbrella collapsed. But that’s the way it has to be: when I look at a Once-Loved Doll, the first words that come to mind HAVE to be, “She looks so cute!” and not, “Hm….I don’t like the shape of that umbrella…..”

Hence the delay. I destroyed the head massager that my sister had given me (there’s a dollar she’ll never see again!) and instead had to resort to one of my favorite things, wire hangers…

Thus begins the second half of my description for “Fire & Rain” Taylor, O.L.D. (Once-Loved Doll) No. 71, added two days – TWO DAYS! – after I first put her up for adoption. 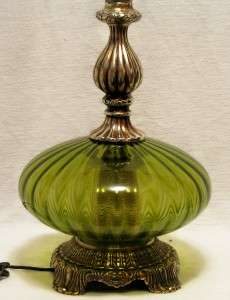 Aren’t glass garden sculptures pretty? The green will add a touch of color.

Once I got the shape better with those wire hangers, the problem became the weight of the umbrella head contraption. Fortunately, it had been Rolfe Clean Up Days a few days before. The one and only thing I snagged was a retro Regency-style vase. I had planned on using the green glass part to make a garden sculpture.

“Just keep the green glass part and throw the rest away!” my wee sister cried in her tiny, tinkly voice.

She’s the peanut gallery, unless she’s spouting something brilliant, which happens more frequently than you’d think. Secretly, I would have gotten rid of the rest of the lamp right then and there, but I couldn’t figure out how to take it apart, so… 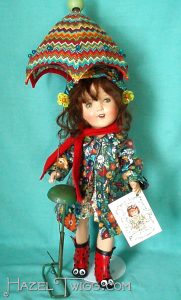 VERSION 1: I wasn’t happy with the shape of the umbrella, and it couldn’t stand on its own. It was resting on the wall behind it. 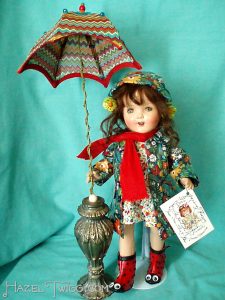 The metal parts were of a heavy pot metal. Finally! Something weighty enough to support that top-heavy umbrella!

“That’s going to cost extra shipping…” my wee sister, who in addition to being The Mayor, also just so happens to work at the post office, so she knows such things.

“I don’t care!” I cried, almost hysterical at this point.

I desperately needed to get on to the next doll, whose cries to be remembered (< a CLUE!) were growing louder by the day. But first, I had to make sure I got Taylor to a point where I could be happy with her. 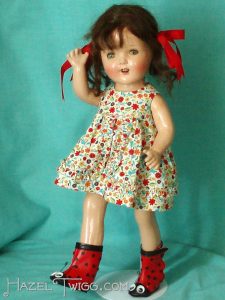 “What’s with the vase?” my wee-voiced sister inquired, upon finally seeing the finished listing.

“That’s a street vase. All the best cities have them,” I sniffed.

One last note, the way the raincoat and hat came about is somewhat of a miracle. I happened to see all three of the fabrics I used for the umbrella, raincoat, and dress sitting side by side in the fabric section of a Walmart and thought, “Perfect for an umbrella, raincoat, and dress!” I considered buying some plastic sheeting, and sewing it to each piece. The thought made me not want to do it. But I couldn’t resist that fabric… 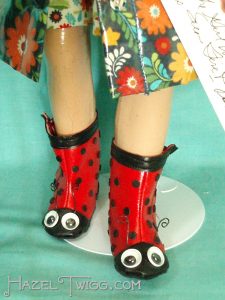 Note the ladybug boots. They were a hoot to make.

I was patiently waiting for the nice woman to cut that fabric and give me my fix, when on a whim I asked, “Is there such a thing as plastic that you can some how fuse to fabric, to make it….”

Before I even finished my question and without uttering a word, this glorious woman went to a shelf and pulled a magical bolt from within its depths.

“This is iron on plastic,” she sang with a chorus of angels accompanying her words. As if it couldn’t get better, she continued, “It’s on close-out, and is a dollar a yard.” Trumpets! A full choir! And FLUTES! Lots and lots of flutes. I bought all that remained, which was about four yards, which means there will be more rain-coated O.L.D.’s to come. Taylor is the second, HERE is the first. 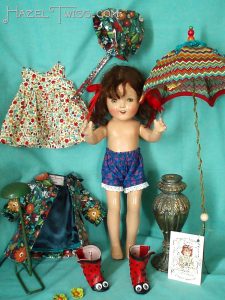 When I was in the thick of sewing, I had some doubts about some things.

“With the plasticized raincoat and hat, having a plasticized umbrella would be too much shininess,” I fretted aloud to my sister.

Yessirree, sometimes that sister of mine is pretty brilliant. Phew.

Speaking of brilliant, the always treasured Michelle E. of Hudson, Colorado adopted Clare II. Which means, both Clare’s are united! Thank you, Michelle!

And with that, I leave you! Happy Sunday, you’re my favorite!