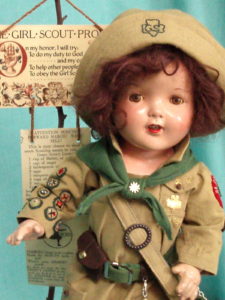 “A-HAH!” I said out loud, pleased with my own ingenuity and inventiveness. I was trying to come up with a theme for the next O.L.D. (Once-Loved Doll). St. Patrick’s Day was coming, but for some reason I was in no mood for leprechauns.

I waited until I had my sister Julie’s full attention before continuing, “Who besides Leprechauns has a green theme and a shamrock logo?” 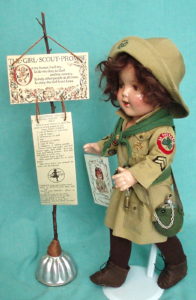 I’d like to thank my dear friend Jennifer T. for printing up the Girl Scout Promise and the cookie recipe. And for helping me out in so many ways! Jennifer’s the BEST.

Julie could not guess.

“GIRL SCOUTS!” I crowed. Yessirree, I really am quite the clever girl to come up with this idea clear out of the blue…Julie’s question interrupted my preening.

“Are you going to use that Girl Scout tin I found for you TWO MONTHS AGO?!”

Thus begins the description for Hazel Twigg No. 104, Georgy the Girl Scout. You can see her adoption page HERE. 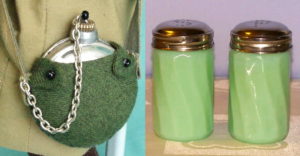 Girl Scout’s gotta have a canteen! I made mine from the lids of some salt and pepper shakers just like this. They had rusted and were unusable.

It was Julie who guessed her name first. I was having a hard time figuring it out. It’s winter, and sometimes my ears get a little stuffy.

“Georgie!” Julie cried. We were on the phone at the time, but even so I could practically see her waving her tiny fists in joy this time.

Here’s the tin that Julie found that led to her suggestion that I took…a few months later.

“You’re RIGHT. It’s GEORGY!” I crowed a little too loudly, my ears being stuffed and all. “And it’s PERFECT, because she’s a GIRL scout!”

There was silence on the other end of the line, so I continued, “You know, like that song! ‘Hey There, Georgy Girl!”

Martha Stewart had a very useful video on the history of G.S. uniforms.

So I obligingly sang for her. I will obligingly sing at the drop of a hat. “Hey there, Georgy girl, swinging down the street so fancy free…” I then skipped to the chorus, “You’re always window shopping, but never stopping to buy…”

There was a pause. “Nope, never heard of it.”

IT HAS COME TO THIS. I knew I was getting older, but OY. No matter! I love the song, and the theme seemed to fit. 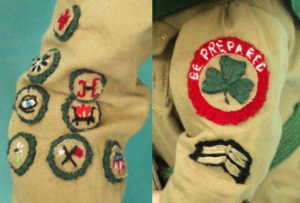 It’s all fun and games until you’re trying to embroider patches little bigger than a pencil eraser. Actually, it WAS pretty fun. These are based on actual patches.

I wanted this to be an early Girl Scout, so I did a lot of research and based mine on a combination of the 1920’s and 30’s era. The main difference I noticed was that patches were worn on their sleeves rather than on a sash. And the hats were so cute!

When I was describing the uniform I was going to make for Georgy to my mother, she protested. 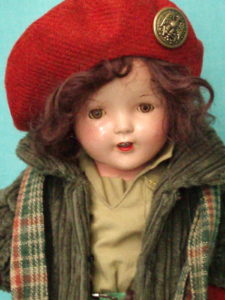 “She should have a beret!” she cried, waving her tiny and also very lovely fists about (my sister Julie comes by it honestly).

My mother rarely gives me directives, so I had to oblige – in my own way, for I art stubborn.

I made an orangey-red beret to go with the olive green coat I made for Georgy for those meetings when the weather was cold. To tie the hat more to the coat, I also made mittens and then a coordinating scarf.

AND NOW! For the uninitiated. This is the 1967 (before my pesky sister was born) song, “Georgy Girl” from an Australian group called The Seekers: 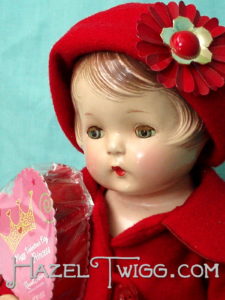 Speaking of great, Presley was adopted by the Great Michelle E. of Hudson, Colorado! Michelle’s about like family. As are so many of you. I hope you all know how much I appreciate you.

And with that, I leave you! Swinging down the street so fancy free. As soon as this ice melts…You’re my favorite.