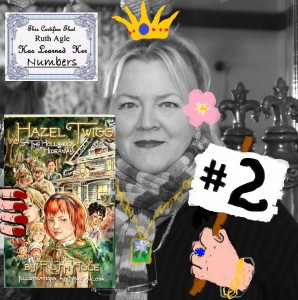 Book #2 is up for auction! You can see it HERE.

I had a hard time coming up with something for the number two. I even secretly snickered to myself as I dismissed some ideas out of hand.

The problem with 2 is that it gets a bad wrap. Little humans of a certain somewhat unpleasant age are referred to as “The terrible twos.” Or in competition some view second place as “first loser,” and there’s no fun in that.

Then inspiration struck: I’m currently working on the sequel for Hazel Twigg & the Hollyhock Hideaway, the SECOND in the series right now! And you know what? Sometimes sequels outperform their originals! So, see? TWO can be a good thing!

For my yet-to-be-named sequel for Hazel Twigg, my goal is a release date of November of 2016. No more of this four year stuff! Plus, technically, I wrote two books in those four years. So really, writing a book in half that time shouldn’t be too hard.

Just like *most of the sequels represented here, I hope to make my second effort better than the first.

So in this case, the number 2, or a sequel, as it were, means that there’s more experience under your belt. Sometimes you have a better feel of what people respond to, and you can improve upon that. Let us embrace the #2!

GUESS WHAT happened with book #3, my lucky number? My dear friend Jennifer Trenary purchased it for ME! She thought I should have it. Which makes me very lucky indeed – to have such friends as this. THANK YOU, Jennifer Trenary! You’re the best!

And with that, I leave you! Happy Blizzard! Happy Broncos! You’re my favorite!

*The original Ghostbusters was better than the sequel. It’s too early to tell with Zoolander 2. I have high hopes…