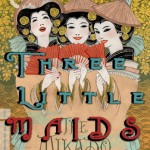 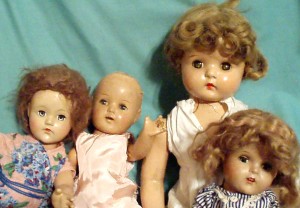 Now if you’re smart, and I think you are, you will notice there are four little maids in the picture. Ultimately, I will be dressing them all, but I’ll just do two – or three – at a time. Plus, I like “The Mikado” and was originally going to use three, but this last little girl snuck in at the last minute.

The reason I chose these four is because they’re each excellent examples of things I want to show during my first live broadcast this morning at noon eastern on Ustream. Yes! The thrill is undeniable! 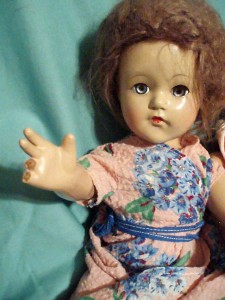 The first girl is Effanbee’s Anne Shirley or Little Lady. Both dolls were from the same mold. Anne was named for the character in “Anne of Green Gables” and was made to resemble the young actress who played Anne in the movie series – and who I believe changed her name to Anne Shirley.

What makes this doll distinctive is that she has individual fingers rather than the usual cupped hands of most composition dolls. The problem with that is the fingers would frequently snapped off, as with this Anne. Either that or she really, really wants World Peace. I’m going to rebuild her fingers.

It won’t be the first time! I once had an Anne with her middle and ring fingers missing. I wrote in her description, “We think she’s trying to say, ‘I love you.’” Comedy GOLD! 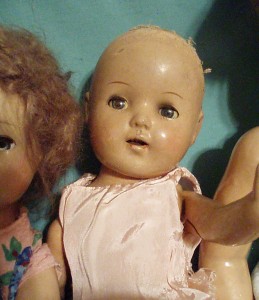 She also needs her lips touched up.

The second girl is the one who snuck in, bald head and all. I love wig searches! I have a several shoe boxes full and it’s always fun to try different wigs on and see what would look best. She is no one special, just one of many of the unidentifiable dolls made by one of many doll manufacturers.

And on that note, we come to the third and largest. I believe she’s a “Special” doll by Madame Alexander. That’s her name! Her worst problem is terrible cracking and lifting on her shoulderplate, but I chose her because I’ve had another “Special” come through. See what difference a different wig and a slightly different paint job makes? 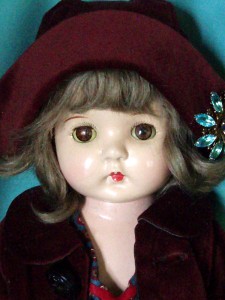 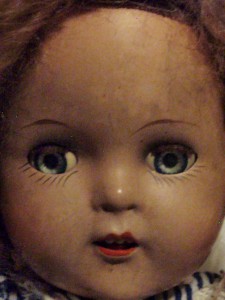 You will not believe the difference when she’s clean.

The fourth girl is exceptionally filthy. She is a Princess Elizabeth type. Back then, doll companies were swapping doll molds like little boys used to swap marbles!

If anyone out there has dirty composition dolls, I can show you an easy cleaning method using a common household item you may already have on hand, but that at the very least you can readily find. She also needs re-stringing, as her joints are a little loose. Good times.

So these are the victims! First the refurbishing, then the fabric choices and dress designs for each including coats, hats and shoes, and then I’ll be listing them on ebay so they can finally find good homes where they will be loved and enjoyed again! I’ll note their progress as I go here as well as on my show. Make-up! Wardrobe! Clapper! ACTION.

Fingers crossed that they turn out well. With a little magic and elbow grease, they will!