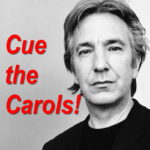 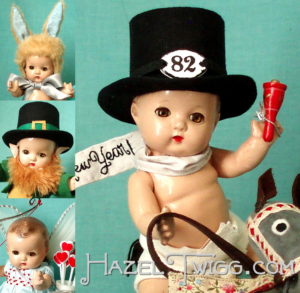 Jefferson is the other half of the year-round holidays. The first doll was HERE.

It’s very rare that a boy doll walks into the Hideaway. This little fellow’s timing – and name – couldn’t be more fortuitous, as in my own personal life I too am bidding a fond farewell to a very rare man…

Thus begins the description for O.L.D. (Once-Loved Doll) No. 82, Jefferson. You can see his adoption page HERE.

Now for the story of Jeff:

‘Tis the season for copious Hallmark romances. You know the kind: newly widowed or divorced single mother moves with her young son to a small town in the middle of nowhere, and there just so happens to be a handsome single cop, or a teacher, or some other perfectly-aged, oddly un-snatched up man just waiting in the wings. After a few stops and starts over the course of two hours (with commercials), he and the mysterious newcomer woman just so happen to fall in love. Amid Christmas lights and carols playing, their story ends with “…and they lived Happily Ever After.” Ah, if only real life could be like that! 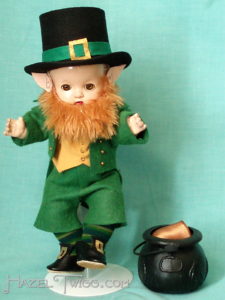 This guy’s my favorite. Note the pointy leprechaun ears.

Well, it (almost) was.  First off, let me explain: in real life, most wonderful men are snatched up. Married. Happily so, with wonderful families. Or else the single men there are to be had are too young. Or too old. Or just plain not interested. In other words, very un-Hallmarkian.

Just over ten years ago, I moved to this little town right here in the middle of nowhere. Newly divorced, young son in tow. Wouldn’t you know it, there wasn’t a single, eligible man in sight. Fast forward a few years to Christmas time. Things were a little tight, and I was looking for ways to squeeze out a little extra money for a Christmas gift. I called my mortgage company to see if maybe they could tack a payment onto the end of my 30 year mortgage. After all, I’d been a very good customer…

“No.” the voice on the other end of the line said.

“Well, how about if you give me a little extra time and waive the late fee?” I persisted sweetly. 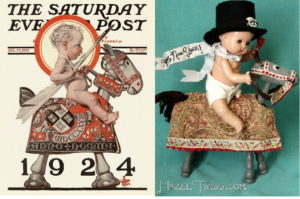 This 1924 Saturday Evening Post was the inspiration for yon horse.

“We really hate doing that. Perhaps if you produced an eye of newt, some lizard teeth…” the voice droned on.

Okay, the demands weren’t quite like that, but there were several hoops this fellow – Jeff, his name was – wanted me to jump through that I felt were unreasonable. A few back and forth phone calls later I finally shouted, “I’LL PAY THE @#&$! LATE FEE! NEVER MIND!” and I hung up. I swore and hung up on the man at the bank. 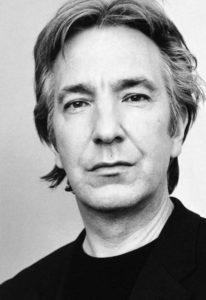 Until I met Jeff, this is how I thought of him. Alan Rickman plays a very good and very intriguing bad guy.

“Wet behind the ears short-timer young punk! Thinks he owns the place!” I muttered to myself afterwards. It felt good to press that “end” button really, really hard, and yet I felt kind of bad. Jeff at the bank was probably a very nice young – if staid and unyielding – man.

So imagine my dismay when a few years later, my son having since moved to Massachusetts, I suffered three operations a few months apart, two of them requiring week long stays in the hospital. Needless to say I fell behind on my mortgage. And needless to say when I had to call the bank to plead I was alarmed that the wet-behind the ears whippersnapper Jeff wasn’t a short-timer after all.

“Maybe he won’t remember,” I fretted to my brothers.

“Oh no, they ALWAYS remember,” said Kenny, who works with bankers a lot.

“Just be nice,” my brothers counselled. So I was. Kinda. Mostly. 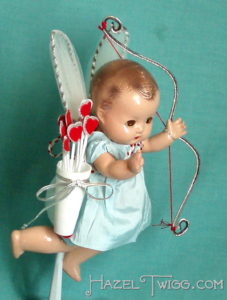 And what do you know? This Jeff banker guy was funny too, with a subtle and dry sense of humor. He was professional, but sympathetic and encouraging. He was charming. He was smart!

As any bonafide artist worth her salt will do, I continue to struggle paying my bills. I’ve therefore gotten to talk to Jeff a lot. We’ve become almost friend-like. So while the constant struggle has been just that, I confess I looked forward to the monthly back and forths with this mystery man on the other end of the line, the other side of those emails that danced *this close* to being flirtatious. Hmm…

But surely, he’s far too young.

“I’m slightly older than you,” he happened to drop in one of our conversations. 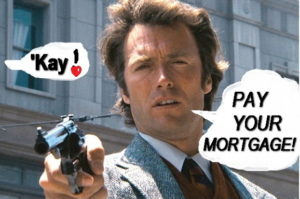 It’s been awhile, so I don’t remember exactly what he looks like, but it was something like a slightly older version of this.

Nope! He has a “significant other.” Hah! One of the milquetoastiest things to have. Does that even count?

He’s probably a toad! Not that I would care. I truly wouldn’t. But once when he was out and about, he came by my house for a visit. He ate the chocolate chip oatmeal cookies that I baked for him, his favorites. He declared them delicious! Even though they were burnt. And he was NOT a toad. Quite the opposite. Tall and handsome. In other words, VERY Hallmarkian.

Not two hours, but years in the making. Still! Cue the music! Cue the Christmas lights and carols! This is IT, world! It’s happened! It’s REAL. 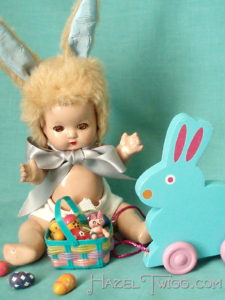 Alas, it was not to be. Turns out, our world views are vastly different. And his Significant Other is more significant than first thought. Ah well, at least I still had him to work with in my continued struggles, and to spar with given our different views. That would have to do.

Turns out, no. A month or two ago he told me he was retiring. And suddenly Friday December 30th is his very last day. Why so young?! My only logical thought is that the much ballyhooed “Banker’s Hours” must also translate to “Banker’s Years.” Shorter than regular peoples. And so I shall miss him as he starts this new chapter in his life.

Goodbye, Jeff! Thank you! Thank you for all! You’ve made one of the constant struggles in my life a joy, and I shall never, ever forget you, you darling, darling man.

And that is the true story behind No. 82, Jefferson.

O.L.D. No. 81 Guinevere was adopted by…Olga of Russia! Our first Hazel Twigg international! That’s a long journey for such a fragile girl. I hope she arrives safely! Thank you, Olga.

And with that, I leave you! HAPPY NEW YEAR, you’re my favorite.