LISTEN! Do You Want To Know The Secrets…?

Here’s what’s going on with Hazel Twigg: in a nutshell, a LOT. 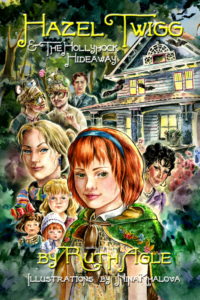 Thank you for submitting your manuscript, Hazel Twigg & the Hollyhock Hideaway, to __________ Publishing.

Unfortunately, this submission isn’t quite what we’re looking for. However, we enjoyed your story so much that we’d like to offer some feedback.

I’ll begin with the positives. First, I adored your well-developed characters. Every character I met (save for Hazel at times—see below) had a distinct personality, a memorable appearance, an interesting backstory, and clear goal. Your cast was so well-developed, in fact, that I can remember each member by name. Excellent work.

Second, I loved your whimsical voice. Your long, thoughtful sentences and cheeky tone remind me of Harry Potter and the Sorcerer’s Stone. I found myself smiling every few sentences. Beautifully done. We very rarely find authors with such strong voices.

As for the negatives, there are three major reasons why __________ can’t accept your novel.

The first involves your point-of-view characters. __________ prefers stories told mainly from the perspective of a single character—in your case, Hazel. Your story is told from the perspectives of many characters. We (your readers) are often in the heads of characters we’re interested in but don’t necessarily want to spend a lot of time with, e.g. the mad toymakers, the batty real-estate agent, the handsome bad guy. We’re much more interested in Hazel’s thoughts and actions.

Second, __________ prefers main characters who are active decision makers. We like characters with clear goals and a strong drive to meet those goals. While Hazel does make some decisions in the first half of the book, she often feels like she’s being dragged through her adventure against her will. Try making her a more active participant in the story.

Finally, the whole thing was a bit slow. I suggest reading Blake Snyder’s Save the Cat to learn how many successful authors and screenplay writers pace their books and movies.

Again, I’d like to stress how much I enjoyed your book. It has great publication potential. Should you choose to submit another manuscript to us in the future, we look forward to reading it.

I agree with her criticisms (I bet you do too) and while the letter is brutally honest, being compared to Harry Potter is nothing to sneeze at! My thought is that if I can make these changes, and do them well, there’s an excellent chance this company will publish my book. I desperately wanted to tackle this rewrite, but real life abounds. There were bills to pay; if I could just catch up first… 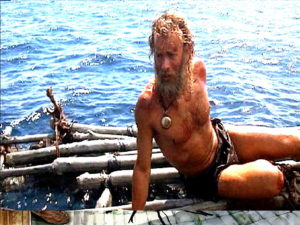 I’ve been living by the skin of my teeth for quite some time. Taking rather common old dolls and fixing them and dressing them and putting them up for adoption starting at $9.99 for a living isn’t for sissies; you miss a week here for a family reunion, a few days there for the flu, a doll or two or three don’t do as well as you’d hoped, and…how do you stop bailing long enough to reach out for a lifeline that could save everything? That lifeline being the possibility of future success and a much better boat if you just have the faith? I’m here to tell you, it’s very hard to do.

Enter my brothers! They’ve temporarily plugged the ship and put the lifeline within reach. All I have to do is learn to swim. Fast. They sent me a smart phone so that I could do live things via Facebook and Instagram and YouTube and the like. THIS is my chance for that final push to make Hazel Twigg all that it can be.

Jennifer is the BEST. And her hands are really quite pretty. Ahem.

The struggle is it’s as if I’ve been on a deserted island and have no idea how to do any of these things. Until two weeks ago, I’d never even texted! My dear friend, Jennifer Trenary, sat down with me and my new phone for nearly THREE HOURS to get me up to speed. Thank you, Jennifer!

The premise of the book Save the Cat the publisher mentions in her letter is this: If your heroine does something in the beginning of the book such as saving a cat, your reader will like and trust her and want to spend time in her head. I promptly ordered the book and read it.

Over the months as I contemplated changes while still clinging stubbornly to my barely floating boat, I’ve giggled madly to myself with different scenarios for “cat saving”: 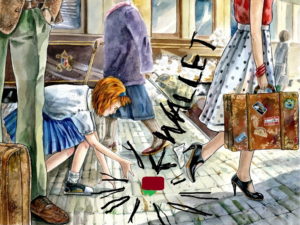 Or here’s my sister Julie’s helpful suggestion: “Mithter! Mithter! You dropped your wallet!”

We cackled together over that one. I’m still working on it, of course…

That is just ONE of the challenges. I’ve removed all the non-Hazel-centric chapters and they totaled 26,500 words in all. Maxwell has been reduced to a car driving by. Smith and Jones have completely disappeared. POOF! It’s daunting, to say the least, but it needed to be done and I’m grateful to actually have the chance to sit down and DO IT.

Here is the plan: I’ll be doing one or two dolls a month, and I’ll be taking doll people and anyone else who wants to watch on the journey with me step-by-step, as a doll person, a writer, and a liver of life in the middle of nowhere in Iowa. I’ll be doing so via several new fronts that I’m just now learning, and I’ll be letting people into my sewing room, a place that I can count on one hand the number of people I’ve allowed in since I turned it into a sewing room a decade ago. I’ll be showing everyone how to do what I do. It’s a gamble. At the same time I’m going to do a complete overhaul of my book. AND there’s a deadline.

But, hey! One of the perks of that is if I’m successful, it’ll make the current copies of the book as it is, 300 copies in all, worth MORE in the future!

You wouldn’t think it to look at it, but for some reason when my garage door is closed, there’s an eight inch gap on one side. Hmm…

I was all set to go starting today, but over the weekend there was a cat I couldn’t save: my own. Lilly was absolutely fine, then Saturday morning I could tell she wasn’t feeling well. I made her as comfortable as I could, checked on and fretted over her throughout the day, hoping it was something that would pass. By Saturday evening she was gone, just like that. It was very sudden.

I’m going to miss you, Lilly.

My sweet neighbor Tom M. was kind enough to gather her for me and put her in my neighbor Brandi’s garage for the night as my garage is not sound. On Sunday morning Julie and my brother-in-law Scott and I had a burial after much digging in slightly frozen ground. We put Lilly next to Elsie. We are down to two heartbeats in this house and it’s an adjustment, that’s all there is to it.

Wish me luck and send me your prayers, please.

With that, I leave you! Happy Monday, you’re my favorite.

Posted in Life in Iowa | 5 Comments »
Tags: Castaway, Save the Cat!, Tom Hanks 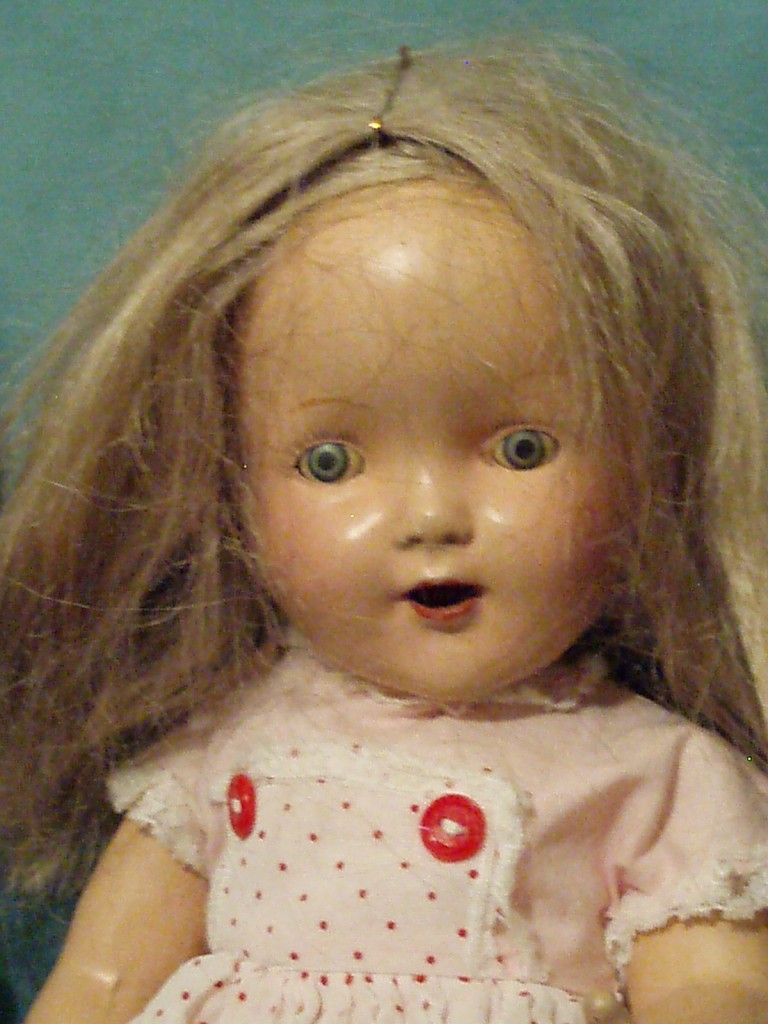 Yesterday we got a friendly new arrival at the Hideaway. Out of love and over time, people will do odd things to their little friends. Take this little girl, for instance. At some point over her life, something must have happened to her wig. Perhaps it wore away. After all, mohair can be fragile. Perhaps it was cut beyond repair. One never knows!

In any case, someone’s solution was to take some synthetic wig hair and glue it to this girl’s head. They then made a center part with a bobby pin. I don’t mind! After all, it was done out of love and an effort to make the doll pretty and comfortable and not bald.

However! With this dry Iowa air, her hair (and I’m sorry, I haven’t learnt her name yet) was floating all over the place. I took a rubber band and secured her hair – until a “new” old wig could be found for her – behind her head in a bun.

Something about this new ‘do looked familiar… 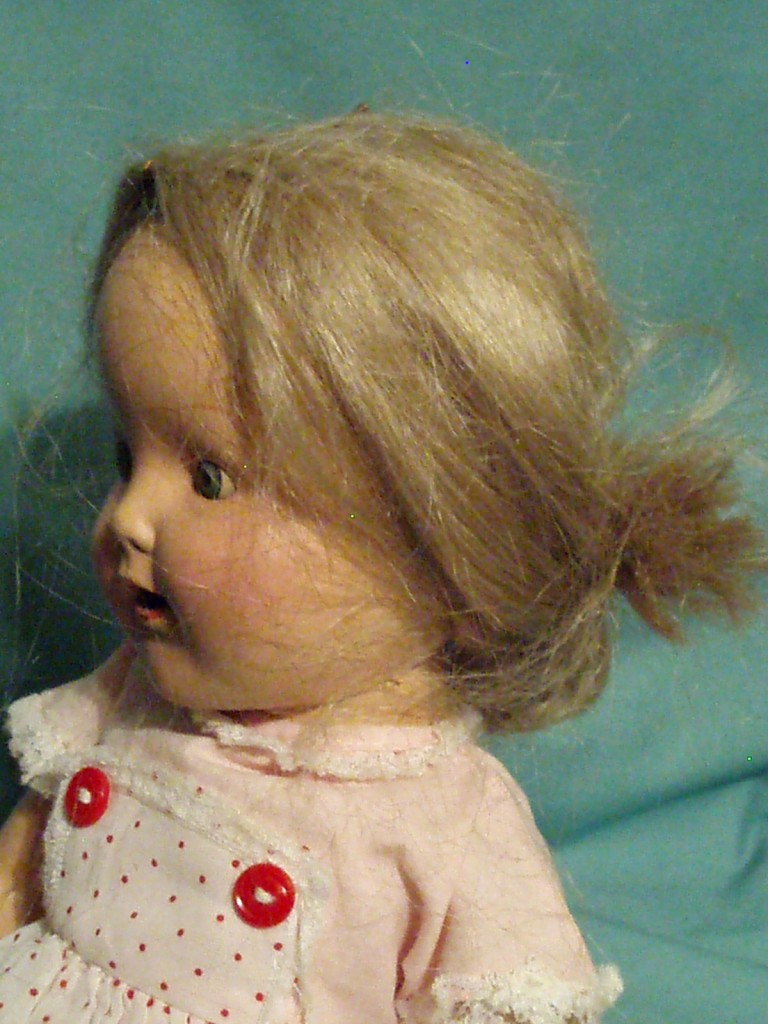 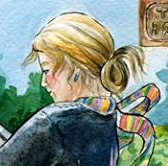 Complete with tangled knot in the back! 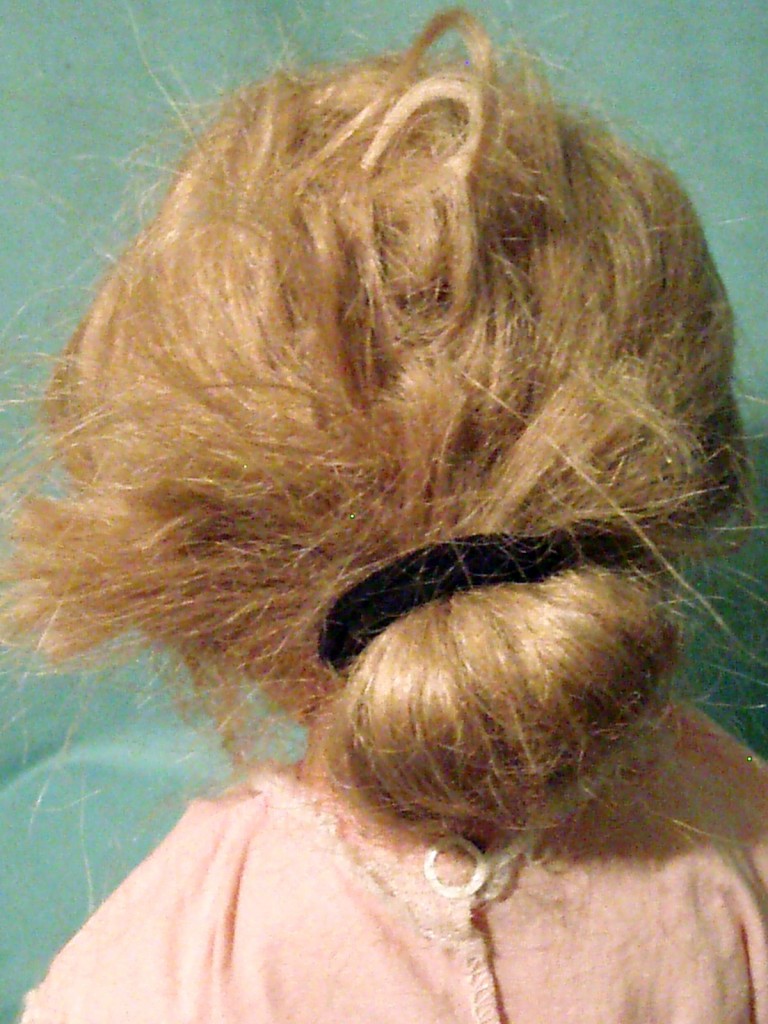 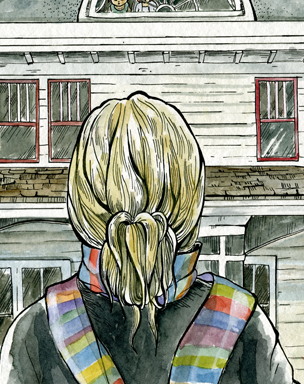 This looks just like the back of my head!

I call it “The Castaway Affect” based on what happened to Tom Hanks’ character in the movie, “Castaway.” 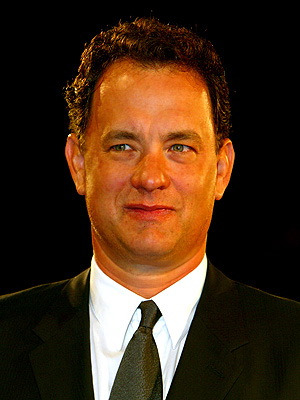 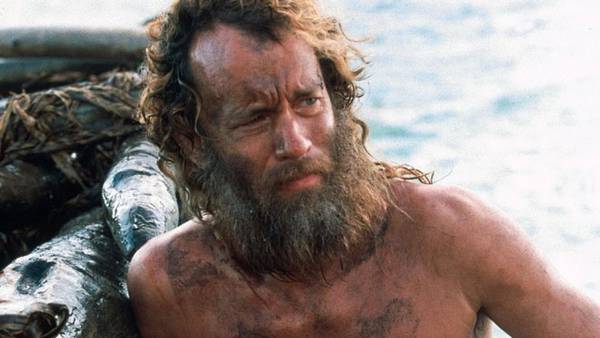 You come to a small town looking one way, but eventually, over time…well. The townsfolk are like family! Plus, if you are a trifle hermit-like and rarely set foot out of doors…Sometimes I will catch a glimpse of myself in the mirror and, “Oh. Oh, dear…”

Now I try and at least put on lipstick when I’m out and about. I occasionally even run a brush through my hair!

If I could only lose weight, as Tom’s character did…I’m working on it! Happy Friday Eve Day!