With A Happy Refrain… 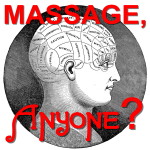 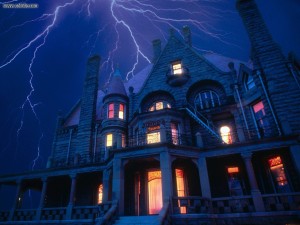 It was a dark and stormy night….

I’ve always wanted to start a post that way, and now I can! For it was a dark and stormy night when O.L.D. (Once-Loved Doll) No. 00037 April appeared at my door, looking for shelter from the pouring rain. Usually O.L.D.s arrive during the day. You can see April’s adoption page HERE. 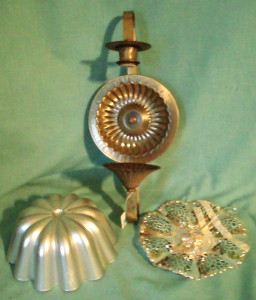 There were actually TWO wall sconces and I bought them both. Lots of useful pieces on that thing…

You may or may not recall that composition cannot remain wet for any length of time. We of course brought April in and got her warm and dry as quickly as possible. And when I found out her name – her full name is April Showers – and it happened to be the month of April, and it was pouring rain out (as it is all week here in the wilds of Iowa), I knew that an umbrella would be just the thing.

I confidently searched the internet for ideas on how to make a doll-sized umbrella. It seemed it would be a common thing, after all, dolls want to stay dry too. And it is! For dollhouse-sized dolls, at least. But there was nothing in an appropriate size for a 14″ composition girl! What to do?

A road trip seemed to be in order. 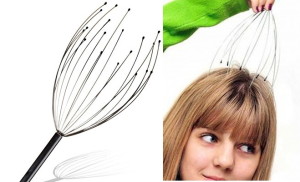 I know! I’ve never seen anything like it either!

The Mayor, the First Dude and I all hopped into a car and went to Dodge. Fort Dodge, that is. And we scoured the thrift store for likely things that might work. We found a jello mold (which I’ve used in the past for other things with success) some wall sconces, and some sort of froofy something-or-other serving dish. 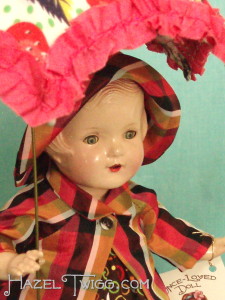 Then we went to our favorite dollar store The Dollar Tree (because everything in there is absolutely $1). And we found….a contraption! A head massager, as it were! I’ve never seen anything like it, but….voila! 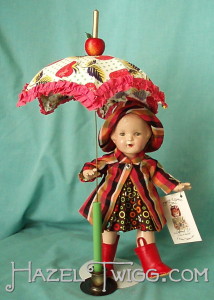 Besides the hanger, I cut a wooden dowel in half and painted it and drilled a hole into one end and used part of the taken-apart wall sconce for the rest of the umbrella.

I used a hanger for the “stem” and truth be told, I have a few tweaks left to make on it, but we have our umbrella.

I used parts of one of the wall sconces (which is why only one made it into the picture) for the base of the umbrella. 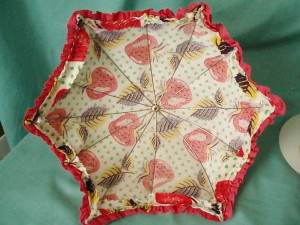 Just a little bending out of the “fingers” was all that was required. There was already a handy-dandy hole in the center, perfect for one of my WIRE HANGERS!! (when I use the phrase “wire hangers”, I HAVE to channel Joan Crawford)

I let April pick out her fabrics entirely and she made some wild choices, but I have to hand it to her, somehow it works! Which is why she is happily singin’ in the rain…

At the thrift store where I found the other fixin’s, I also found some red vinyl material with which I made April’s galoshes. She also has a clear vinyl raincoat to go over her plaid coat. Ooh! And I bought that plaid fabric at the same thrift store in a previous trip! Into each life, a little treasure must fall and sometimes you just have to get into Dodge. 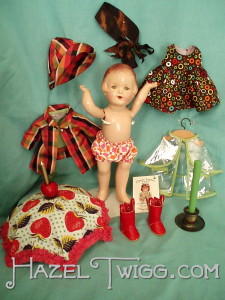 Whoa! Introducing the Hazel Twigg Strictly Regency-Era Dolls With Some Kind of Animal Costume Line, because Beatrix did really well! Michelle won her in a hard fought battle. Thank you, Michelle! I also want to sincerely thank ALL who bid. The war for magic continues! I’ve got plenty of tricks up my sleeve…