Most collectors of antique dolls have heard of “Frozen Charlottes.”  They were first created in the 1800s, and I knew them as small dolls with unjointed limbs that were baked into cakes as prizes, or used to cool tea or to people dollhouses. What I didn’t know was the story behind them.

The following is a (shortened version) of a cautionary poem:

A Corpse Going to a Ball

Based on a true story of a young woman named Charlotte J. who died in 1830.

Now, Charlotte lived on the mountainside,
In a bleak and dreary spot;
There was no house for miles around,
Except her father’s cot.

In a village fifteen miles away,
Was to be a ball that night;
And though the air was heavy and cold,
Her heart was warm and light.

“O, daughter dear,” her mother cried,
“This blanket ’round you fold;
It is a dreadful night tonight,
You’ll catch your death of cold.”

“O, nay! O, nay!” young Charlotte cried,
And she laughed like a gypsy queen;
“To ride in blankets muffled up,
I never would be seen.

With muffled face and silent lips,
Five miles at length were passed;
When Charles with few and shivering words,
The silence broke at last.

“Such a dreadful night I never saw,
The reins I scarce can hold.”
Fair Charlotte shivering faintly said,
“I am exceeding cold.”

They reached the dance and Charles sprang out,
He reached his hand for her;
She sat there like a monument,
That has no power to stir.

He took her hand in his – O, God!
‘Twas cold and hard as stone;
He tore the mantle from her face,
Cold stars upon it shone.

Her parents mourned for many a year,
And Charles wept in the gloom;
Till at last her lover died of grief,
And they both lie in one tomb.

I made this for a dear friend one Christmas. I did a little silk ribbon embroidery on top. 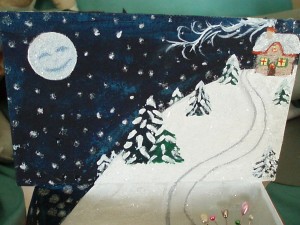 It was a paper mache book. I painted a wintry scene on the inside lid and sprinkled it with lots of glitter. Everything looks better with glitter! Except food. 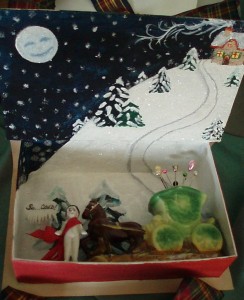 I fortuitously had a horse-and-carriage pin cushion.

Nothing says “Christmas” like a cautionary poem! Look closely at what “Charlotte” says. 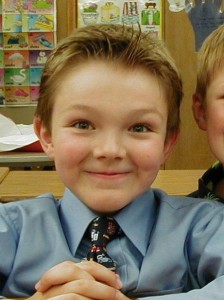 Adam at five. I shan’t say anything, lest I gush(!) 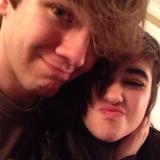