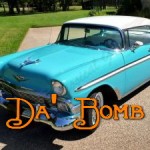 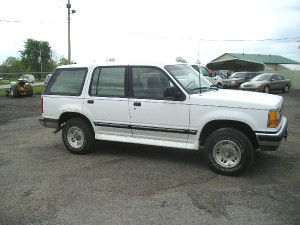 I LOVED my Explorer. Unfortunately, it died soon after arriving in Iowa.

What if you could pick out your own car? The “rusty old white car” that Ruth is driving is a blend of two cars from my past: My trusty white ’93 Ford Explorer steed that I’d owned since before Adam was born and that brought me to Iowa, and The Bomb.

Back in the 1970’s when we were living in Cedar City, Utah shortly after having moved there from Hawaii (THAT was a tricky transition, let me tell you!), my big sister Carol entered a contest given by the local car dealership: Put your name in for a raffle, and if it was drawn, for $25 (which basically covered registration) you would win a car. My sister won!

Not being a car expert, all I remembered was that “The Bomb” (which is what we affectionately called it, before calling something “da bomb” was cool) had rounded corners and tail fins. And THAT was the car I wanted Ruth to have, except white in honor of my Explorer. So I sent Nina these pictures(‘cept I asked her to make it white): 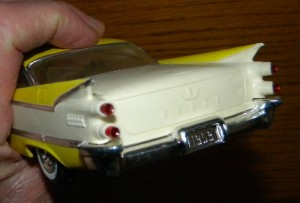 Turns out (I talked to Carol last night) it was a ’56 Chevy Bel Air! 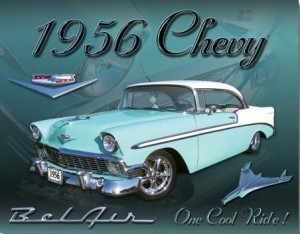 Of course, that’s the car when it was new. It was a LOT more faded by the time my sister got her hands on it, but she loved that car. So did I.

And more than once, my poor son or I or my sister Julie have had to retrieve cans after they fell out of my car and rolled onto the ground upon opening my car door, because I am a lover of Diet Coke. And I am a thirsty driver. Better than littering, right? Of COURSE right, I’d never litter! Even WITHOUT the nickel deposit!

I’ve decided to find that clanging sound in the middle of a crowded parking lot of an empty can rolling away humorous. Look at the can lady!

Why has no one snatched me up yet?

Tomorrow: Nina vs. Ruth round 4. Maybe THIS time I’ll win! Maybe not…