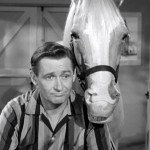 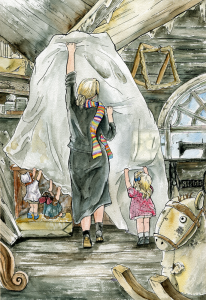 From the first main version, before Hazel Twigg was born. That’s Rochester in the lower right corner. 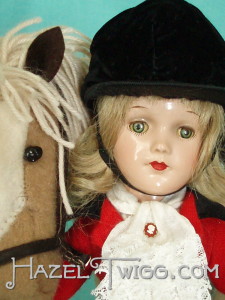 It’s only been a week, but for the life of me I cannot remember WHY I chose to do a horse and equestrian-themed doll this week. Britney is O.L.D. (Once-Loved Doll) No. 00028, and you can see her adoption page HERE.

Love of horses goes back a long way. In the very first version of Hazel Twigg, before Hazel herself even came into existence, I had a stuffed rocking horse named Rochester featured prominently in the story. I remember specifically describing him to Nina and being really happy with how he looked. I named him “Rochester” after a literary character from my favorite book Jane Eyre. 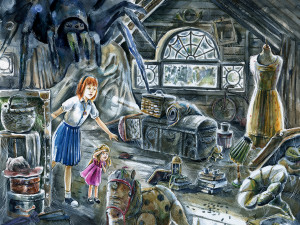 Rochester in the current book, center foreground. A little darker and worse for wear…I still love him.

Rochester made it into the new version of the book, although he’s not featured in the story itself. Maybe he’ll make an appearance in the next book!

All I know is that suddenly, when faced with a doll originally sold as a “Debuteen,” I had this sudden urge to make a horse for her. But, how? I didn’t have a pattern! So I, um, winged it.

Like millions of other girls, I’d drawn countless horses in my time. Plus there was this thing called the internet. But I am out of ink, so I am therefore printerless. So I just kind of drew a horse shape. 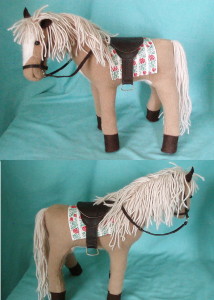 I wanted good natural fabrics. I found parts – PARTS – of an old wool blanket. Barely enough to make Rochester! Because I knew I wanted him to scale for Britney to ride if she wanted to. I still had to put his body into four different pieces to have enough, and I only had one shot.

I spent well over a day on this guy, and that’s not counting the harness and saddle. When you only have a week to begin with, plus other odd jobs to do, that’s a lot of time for a gamble. Oh, no! His nose was too short! And his legs were too! Secretly, I sweated bullets as I wrestled with this guy. And I was never fully sure he would work until I had him fully stuffed. I also didn’t know until then whether or not he would be appealing. He is FLAWED, but there are some happy accidents there. 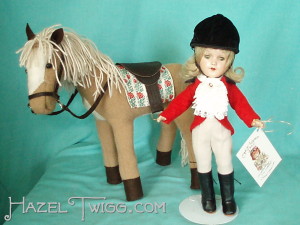 In lengthening his nose by re-opening it and adding blanket scraps to the end and with my choice of materials from what I had on hand, I unwittingly made him look like Mr. Ed! For some reason, his head is skewed to one side. I don’t know how that happened, but I’m glad it did! I don’t think I could have done that on purpose. Also, one of his felt ears is droopier than the other. I like that too.

Rochester’s mane and tail are vintage 100% wool yarn, and his legs are stuffed with sawdust. I inserted little sticks into his legs and neck to make him sturdy. 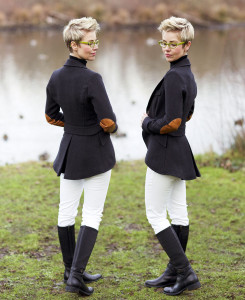 Here’s the inspiration suit. I liked the way it swooped down towards the back.

It’s not like I know how to do this when I set out to do something. There’s a lot of pondering that goes on as I work things out and a lot of fretting that this thing that I’m spending so much time on might be a waste of said valuable time and I’ll have to think of something else. But, he worked! He’s a little crude, but he worked! 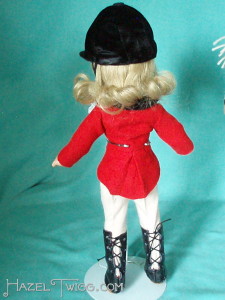 Look at that ‘do! Doesn’t she look like just the sort of person that would ride a horse, I ask you?! That little pleat in the back of her jacket took me HOURS to figure out. I get a little obsessed, I can tell you…

As for Britney, she was a joy from the start. She was in very nice condition, which is what allowed me to go out on a limb and make a horse in the first place. Her helmet was made from one of those old aluminum Jell-O molds. I’d purchased a L-egg’s pantyhose container at a thrift store for that very purpose, but it was too small! Thank goodness I have random Jell-O molds sitting on my craft room counter. 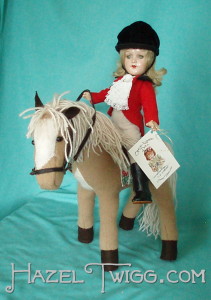 Britney can actually RIDE Mr. Rochester! I was tickled pink when I discovered such was the case. You can see all the shadows. The light was fast fading as I rushed to make my deadline.

While searching for something else, I found a pair of tiny cameo earrings. Perfect for a jabot pin! Britney’s boots turned out really nicely too. I think I’m finally starting to get the hang of this shoe making thing.

I like to think I’m getting faster, and I am! But the faster I get, the more elaborate I want to get too, and the more I want to challenge myself…I barely finished Britney in time for her listing and ended up working until midnight at my other job to make up for how long everything took. 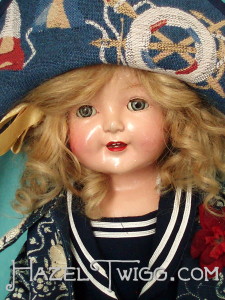 However! Things like Felicity’s Finish puts the skip in my step that I need. I am so grateful to all who visit this site, to all who watch my auctions, to all who bid, and to all who win. You light up my life!

Felicity was adopted by Sylvia R. of Cayuga, New York! If she hasn’t been blown away by a blizzard, thank you Sylvia! Felicity will be on her way soon!

And with that, I leave you! Happy Tuesday! You’re my favorite.