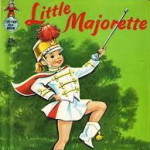 I LOVE spats. I sacrificed the cutest pair of kidskin gloves so that Marjorie could have some.

I don’t know where exactly the idea of doing a majorette came from. But when it did…when it did! Things fell into place in ways you wouldn’t believe. I can’t tell you here, but my post regarding this girl will reveal the amazing coincidences that collided to bring her together. Until then… 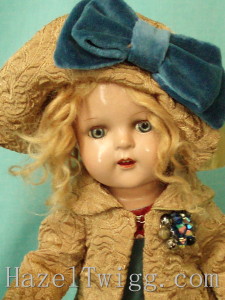 Here she is in her “street” clothes.

Thus begins the adoption page for Marjorie the Majorette. You can see it HERE.

And here is the story: Whenever the next little doll and I decide what her “theme” is going to be, I send her out to play with the other little dolls, and I do research so I can figure out how I want her outfit to look. So I researched, “Vintage Majorette.” 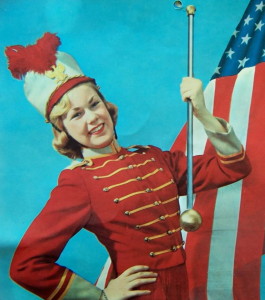 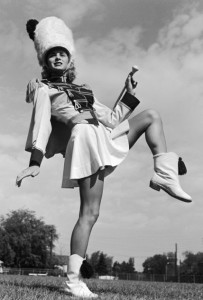 Ooh! A hat with an eagle! I just so happened to have an eagle pin! I’ve had it in my stash forever, and when I’ve stumbled across it I’ve wondered where I’d ever use it. It’s far too large to use as a brooch for a doll. And now here the use is! On Marjorie’s Hat: 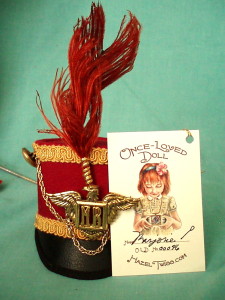 See that plume? It was sent OUT OF THE BLUE in a box of GLORIOUS goodies from a friend named Janey that I’ve never met in person. PERFECT TIMING. 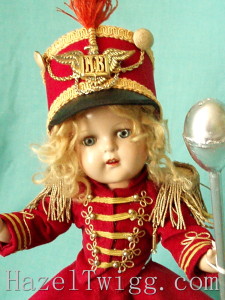 I like that Marjorie also looks like she could have stepped out of a stage production of “The Music Man.” That’s Iowa based!

But the best thing I found when doing my research wasn’t just the following image, it was the poem that came with it called, “Prance Little Lady.” It was written in 1954 by a father for his daughter, who had been a majorette at Leonia high school from 1941-1942. The majorette’s niece posted photos and the poem on her blog where I was lucky enough to stumble across it. BEHOLD: 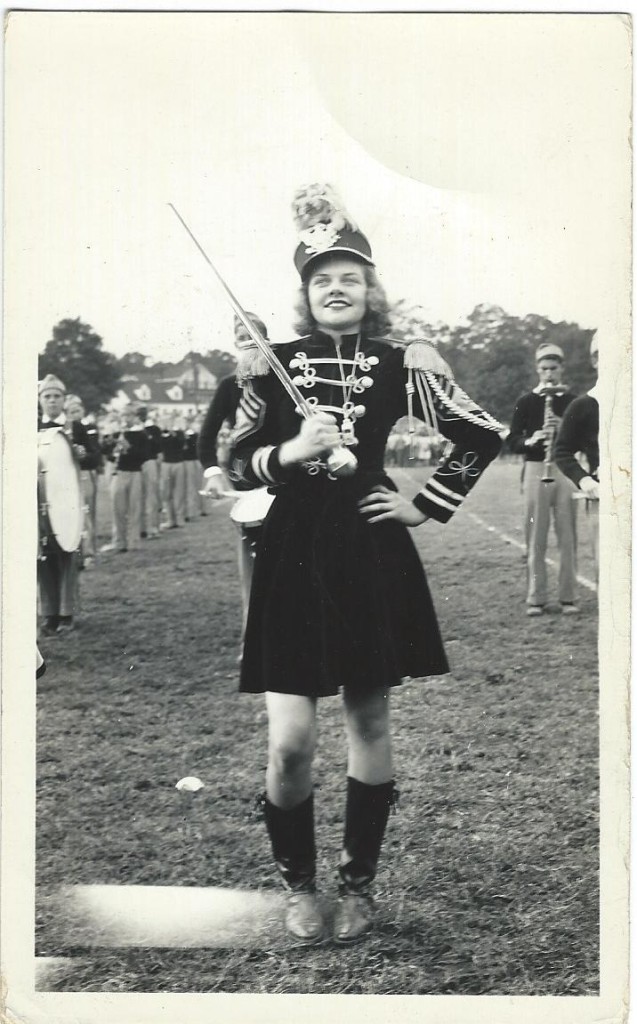 Prance Little Lady
Strike up the band, here comes a cutie.
Baton in hand, ready for duty.
High-action knee – smile grimly set –
Who can it be but the Drum Majorette?
Twirling her stick like an airplane propeller –
Gee what a trick! What a treat for a feller!
Bobbing her head, her baton swinging high,
“Margie” co-ed, majorette, marches by.
Thump! Goes the drum; Oompah! The brasses.
Onward they come, the lads and their lasses.
All round the field – into the stand!
Strut, Little Lady! Strike up the Band!

Marjorie Hope Bower
Majorette
Leonia High School
1941-1942
Daddy 1954
It took me awhile to realize what I was seeing. I was so focused on the lovely images from the site, and from the poem itself. It wasn’t until I re-read the kind permission email I got from the original poster that I finally noticed. The girl that the poem was written for was named

And here’s a closer shot of that pin: 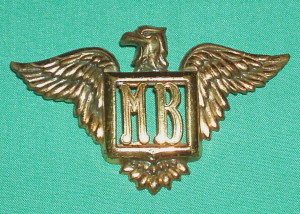 Sometimes things are just meant to be.

Speaking of Meant To Be, brace yourself! Patriotic Liberty was adopted by…Kathleen Z of Alameda, California! HAH! Fooled ye, didn’t I? Thank you, Kathleen! Glad to hear you love Liberty. So do I…

And with that, I leave you! Happy Wednesday, you’re my favorite! And HAPPY GREATER ROLFE DAYS!!! (surely you’ve heard!)