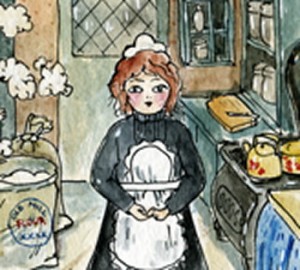 As usual, Nina did her bang-up job. Why, Gertie! You’re beautiful! And still YOU!

Click on any photo to enlarge. You know you really want to study poor Gertie’s nose!

Nina strikes again! She’s the illustrator for the book series, and here is her illustration for the first version of the book, when Gertie was still a part of it. Gertie, hush! You will make your appearance!

Actually, Gertie pretty much takes everything in stride. She has to! 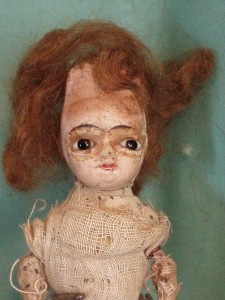 I found some pictures I’d taken of her soon after I brought her home. Her hair is pretty much a hank of mohair – and did I mention that her head is shaped funny?

I have to whisper this next part, because she’s pretty sensitive about it, but apparently these l-e-s-s-e-x-p-e-n-s-i-v-e dolls of her day had their hairdos molded into their heads, and then their hair was wrapped around it. Wish I had a side view, but it’s kind of like a “skin” tiara; built up in front, flat in back. She gets more appealing with each detail, doesn’t she?

<In this second photo, I was showing off Gertie’s neat old legs. Nifty! You can also see how her body was holey and her arms were hanging by a thread. 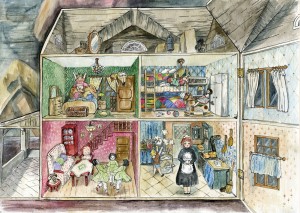 We had several artists try out for the job. Nina was hands down the best with great little details. Click for a better view.

Here’s Nina’s illustration of the dollhouse. I loved things that she did so much that I borrowed some of her ideas. The triple bunk bed, for example. You can see my version in yesterday’s post. It’s since been painted. 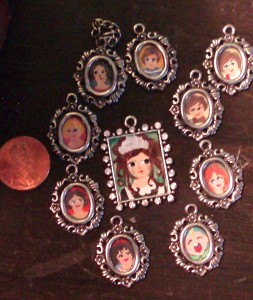 These things are tiny. There’s a penny for comparison.

I also painted little portraits of Gertie and her wards for hanging on the walls. Note there are now NINE children! A little baby was added, *Poof*! Or, ta-dah! Just like that! No matter. There’s plenty of love in Gertie’s heart, which seems to grow larger with each addition.

And to these little hooligans, hers is the dearest face of all.