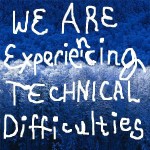 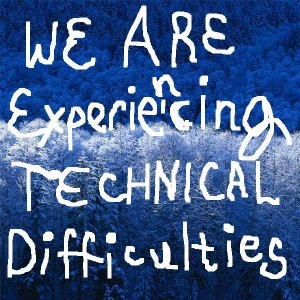 This laptop has none of my own pictures, just four sample pictures of the seasons. Naturally, I chose Winter, the magical bat-free season of no bats, and I wrote with the little slider pad thingy and an “eraser.” I’m thinking of making this my new font. Ahem.

1. Turns out that when filming a practice session of live streaming video (in which I was brilliant and witty, not to mention GORGEOUS (you’ll never know)), the red light doesn’t mean you’re recording. Nope! It’s what you hit to record.

I believe the entire show consists of one second and one word: “Oh.”

2. When you’re experiencing technical problems with your USB port, don’t run to YouTube and take the advice of the first guy you see, randomly going deep into your computer’s hard drive and deleting some little thing that this Yogi person declares will help, ignoring the voice in your head – and the warning that pops up from your computer – and hitting “delete.”

With a single stroke, I did something to my computer and now it is dead. Temporarily, I hope. This here’s my laptop, ancient and slow.

Let’s hope today will go better on a technical level. There’s no way to go but UP.