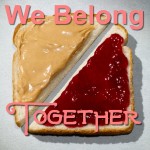 A few of you noticed. One person in particular. Of course, as it was going on, I didn’t know what the outcome would be, but now I do! And for the rest of you, here is the rest of the story…

Remember Clementine? She of the tricky wool jacket and multiple wig trials? You may recall that she was put up for adoption twice. You may or may not recall that it was a friend of mine who adopted her the first time. A friend of many years that I have never actually met. We bumped into each other online over – you guessed it – dolls. Old dolls! And we’ve been emailing each other back and forth ever since.

She really wanted Clementine and was so excited when she won her. I was happy for her too! And then, whoosh! A calamity occurred! I won’t go into details, but sometimes a little calamity is all it takes!

I would loved to have simply given Clementine to her, but with my upcoming third operation in a year, I was in no position to do so, even though I so dearly wanted to. So there we were, two kindred souls, 23 states away from each other, pining. 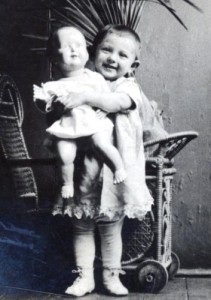 This is NOT Brenda of New York. While I don’t think I could pick her out of a crowd, I am sure of that. It is, however, someone who loves her doll and much as Brenda loves Clementine.

There was nothing for it, it just wasn’t going to happen. So I cleared all evidence of my friend adopting Clementine from this site (if you look, you will not find it), and put her up for adoption again. And once again, Clementine was all set to go in a completely different direction, from someone as eager to love her as my friend had been.

But then they remembered.

Sometimes, when something is meant to be, there’s no fighting it. The person who won Clementine the second time around is a reader of this blog. They contacted me on the morning I was getting ready to send Clementine off and asked me to do something unusual; Send Clementine to my friend.

That was not their intention at all in the beginning. Something just told them it was the right thing to do. I got the blessing of packing up Clementine and secretly sending her to her new old destination. And now she and my friend, Brenda M. of New York, 36 states away, are together, just the way it was meant to be.

My readers are the very best.

I’m working very hard on the next O.L.D. She has an uncanny resemblance to someone some of you might recognize. Can’t wait to show you!

Until then, Happy Friday!

Posted in Lost Dolls | Comments Off on Miracle On NICE

« Ask Not! For Whom the Bell Tolls… (Previous Post)
(Next Post) Just Wild about HARRIET »
« Previous Image