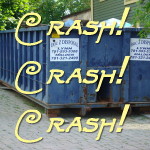 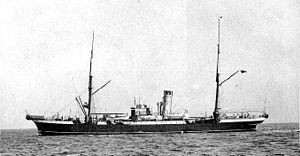 The funeral service is conducted by the Reverent Canon Hind. For nearly an hour the words “For as must as it hath pleased, we therefore commit his body to the deep” are repeated, and at each interval comes ‘splash!’ as the weighted body plunges into the sea, there to sink to a depth of about two miles. Splash, splash, splash.

From the Diary of Frederick Hamilton(Cable Engineer: Mackay Bennett) 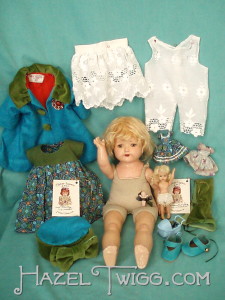 The underclothes above Rosemary’s head are what this true tale is about.

The Mackay-Bennett was the ship commissioned by the Titanic to recover bodies after the sinking of the ship. They couldn’t bring all of the bodies back to shore, so many of them were buried at sea. Now, what I’m about to tell you is of course nowhere near as dreadful as that, but it was terrible all the same. This is the story of how I got the fabric for O.L.D. No. 00030 Rosemary’s underclothes. You can see her adoption page HERE.

Two doors down from me is a lovely old house that for the longest time was lived in by a 90+ year-old woman I called “Heloise.” She was very spry for her age and would set corn 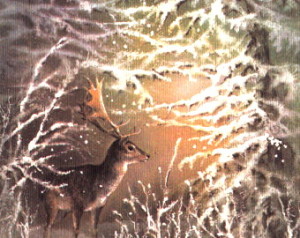 out for the deer. Several times I would wake up in the early morning hours in the dead of winter as I frequently do, and I would look out my window and see a magical sight; several deer visible in the warm glow of the light on Heloise’s garage, surrounded by fir trees and freezing snow, quietly eating. 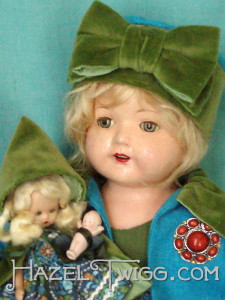 I went into Heloise’s house once. She had a composition doll that needed repairing. Her home was beautiful. All original woodwork and light fixtures. Stunning, is the first word that comes to mind. Crammed would be the second. Crammed with so many things that I could hardly absorb any of what I was seeing. I do remember lots of books, but who knows what else there was?

Then one day Heloise was no longer there. She had gone to a nursing home. Not long after, a dumpster arrived, and Heloise’s sons, “The Boys” as Julie and I referred to them, even though they were probably around 70 years old, got to work. Day after heartbreaking day, all I could hear from my open window (it was summer) was Crash! Crash! Crash! 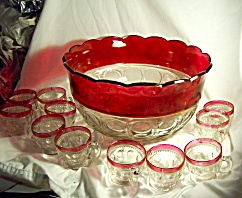 Once I happened to be outside at just the right time, and one of the boys handed me a box without me even asking! Inside was this very pretty King’s Cross Cranberry Punch Set. Can you imagine all they threw away?!

All manner of glassware, knick-knacks, furniture and books – almost a century’s worth! –  hit the metal base of that dumpster without any ceremony whatsoever. It was HEARTBREAKING. Once Julie and I were driving by as they relentlessly toiled away, and she spotted a pretty vintage floral chair from the 50’s era that she so adores. She asked if she could have it. One son was gruff, “Okay, but that’s IT! We don’t want you dumpster diving!” the other was friendly, “Do you want the ottoman that goes with it?” 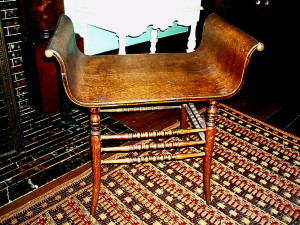 One of the five chairs. It looks like a vanity chair from the Victorian era.

Day after day the overflowing dumpster would disappear and then reappear, empty and ready to go all over again, and there would be more heart-breaking crashes. Crash! Crash! Crash! I had to close the window of whichever room I was in. 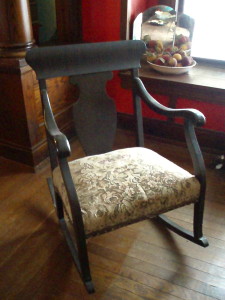 Here’s another. A simple and sturdy old rocking chair.

In their defense, on more than one occasion, a chair would magically appear on my porch; five in all. The nicer “boy” – at least, I suspect it was him – became my very own Chair Fairy. Why they chose these particular things to give, I have no idea. But I was grateful all the same.

The day finally came when they were done. The house was empty of most of its contents, “The Boys” were gone, and silence reigned once more. Who knows all that was lost?

In the driveway of Heloise’s home stood that dumpster, full for the last time with contents from that beautiful house.

With The Mayor with me for company and courage, I finally did what I’d wanted to do for days, I climbed up onto that dumpster to see what I could see. By now all that was left were the nitty-gritty strays. Trash and old vacuums and the like. All except for one thing that I plucked from the center of the pile: five or so yards of the most beautiful white lace fabric in delicate cotton I’d ever seen. It was dirty and needed a washing, but Hallelujah! It made my day.

Here she is, all dressed up.

Our Rosemary is the first doll I’ve used it for – after washing it, of course. Both her slip and her onesie. I made her slip first. Then I trimmed around the flowers to create a second “fringe” of lace for the legs of her onesie.

Rosemary’s baby is a Nancy Ann Storybook doll. Her baby’s baby is a tiny Kewpie under 2″ tall. Not super old, but very sweet. And he can double as a necklace!

I’ve long wanted to do a doll with a doll of her own. When I saw Rosemary (that’s her real name. She was made by the Effanbee doll company), I knew she would be perfect for the role. Because then I could have “Rosemary’s Baby”! See what I did there? The The Mayor (aka Julie) piped in and suggested “Rosemary’s Baby’s Baby” and I obliged. And I finally used some of that beautiful white fabric. Rosemary’s coat sports the VERY LAST “Made Especially For You by Ruth” tag. A sure-fire way to identify them as made by me for the Antiques Roadshow in 2168! I’m going to miss them…

Heloise recently passed away, and with her goes a little bit of magic from my life. I’ve missed those deer feeding at night for quite some time now. But her house once again is lived in by a lovely young woman, who is slowly re-filling it with treasure. And thus ends the tale of the Mackay-Bennett dumpster dive.

Mabel is headed off to Colorado! The lovely and loved Michelle E. strikes again! Thank you, Michelle! I shall be haunting YOU! Eventually…maybe.

And with that, I leave you! Happy Tuesday, you’re my favorite!