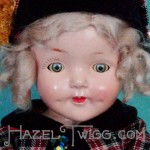 That’s Sophie on the left, Sally on the right.

And as a leap of faith, I’ve told Sweet Sophie that she no longer needs to watch over me, that it’s time for her find a new home. As a refresher, Sophie happened to arrive just as my bat extravaganza was going full force. Due to her kind nature she decided that I was the one who needed her most so she vowed to stay with me until I was one season Free of Bats.

But I am tired of being afraid! Therefore I’ve been urging Sophie to go. She is still reluctant. Remember her friend? The one who was hiding with her under the blanket? She stayed by Sophie and my’s side this whole time as well. Now she is leading the way for Sophie: she is going to leave the bat’s lair – er, the Hideaway – first. 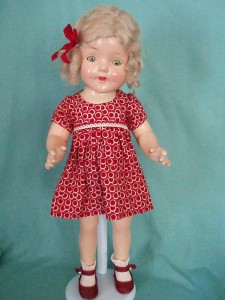 This vintage red fabric is one of my favorites. Even though she is an inexpensive doll, I decided Sally was definitely FavFab-worthy.

Meet Sally Silver. While she is much smaller than Sophie and not quite as showy, she is every bit as sweet. If Poor Edith from Downton Abbey had been a poor American child of the depression era, an American middle child, never quite out of the shadow of her older and younger siblings, Sally Silver would have been her doll.

You can see that Sally was never an expensive doll. Her tin eyes don’t have eyelashes, and she’s been crudely carved at her limb and body seams and her teeth are only painted on. But like many of her simple sisters, her composition has held up better than some of the best!

She picked the plaid for her coat and hat.

The back of her mohair wig has been worn away, probably from the countless nights she spent laying beside her little human at night, sharing secrets and whispering into the dark, her sweet dimples never leaving her face even as she soothed fears and broken hearts.

But little girls don’t stay little girls forever. The human little girls, at least! Little composition dolls do. It’s the way of the world. Somehow over the years Sally was forgotten; she was Lost. It speaks volumes for her that on the brink of finding a new home, of being loved by a little girl again, she opted to stay by Sophie and therefore my side. She’s become comfortable here. It speaks volumes more that she’s now ready to take that first big step back into the world.

That’s a lot of time right there. Sally was worth every second of it.

So here she comes! Sally Silver is emerging from the shadows! Her clothing, complete with a satin-lined coat and hat (to protect her remaining mohair curls) and red dress with matching leather shoes were made for her by me and have been carefully preserved. She is donning them again!

Sally will make her debut on ebay this Sunday under the seller’s name of hazeltwigg. Find a good home, Sally! I will miss you more than you know. – Ruth 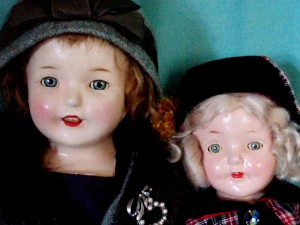 If there are no bats between now and then, Sophie will follow Sally the following Thursday. PRAY FOR NO BATS!