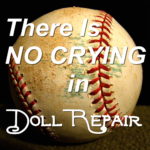 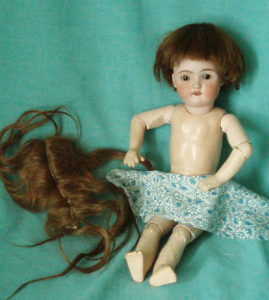 A rare preview of the next doll. I believe she was made by Kestner, “The King of Dollmakers.” She has pierced ears and sleep eyes and is under 12″ tall.

So there I was, happily working away on the next O.L.D. several days ago. I had been working on her for over a week, had planned on putting her up for adoption this very evening. There was still much to do. She is small, which is good, because the piece of old green velvet I was using for her cloak was very small too.

I was holding the freshly cut cape up to this delightful girl, already dressed in her (stunning!) new outfit, when “Plop!” something fell into my lap. My heart sank. I don’t know how, but I wasn’t one bit mystified. I knew EXACTLY what it was. And I was right! Even worse, it was worser than I thought!

It was her lower leg. And it hadn’t just dislocated itself, it had broken off completely at the knee!

Reader, I have worked on hundreds of dolls. This current doll is O.L.D. No. 81, but I’ve been toiling over dolls long before Hazel Twigg. That said, this doll is something new. A type that I have never, ever restrung or repaired. 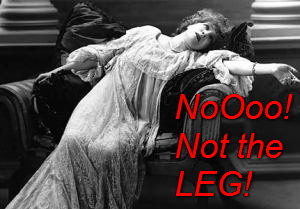 If this were Victorian times, I would have had the vapors. As it was, it took me two days – days in which I worked on other aspects of this doll’s story – to get up the gumption to repair her.

During this time, there was a lot of back and forth with a dear friend who has restrung this kind of doll, and who held my hand during this whole ordeal. When I finally tackled it, it was a lot harder than I thought; the stringing elastic from the body meets the hook from the lower knee halfway up through the thigh. The tunnel running through the thigh is smaller than a pencil. I had to make a special hook to get up there to pull the elastic down, at the same time, grasping the end of the leg hook with needle nose pliers and blindly fishing up that tiny tunnel as I pulled, hoping to get lucky. Not only that, this doll is old and all this pulling causes EXTREME pressure, especially on her fragile head! 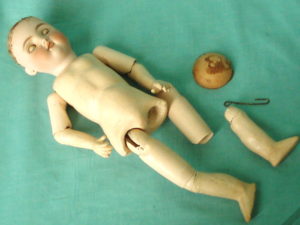 Here she is pre-repair. Her knee has been reglued, but I hadn’t restrung her yet. Gulp.

I finally managed to get her back together, but the whole thing shook me a little. As I wrote to my friend, “Brenda” we shall call her, for that is her name, it was like “trying to defuse a bomb with a nitroglycerin switch.”

“Nobody will care about the knee!!!!” she helpfully responded. THIS is why I love her. She figuratively slaps me from afar (we’ve never actually met) when I get virtually hysterical.

This next O.L.D. will finally make her debut this Sunday. I don’t know her name yet, as luckily she’s been dormant this entire time, and doesn’t know the maladies that have befallen her. Thanks to this tragedy of errors, she is the only Hazel Twigg doll that will be available to arrive before Christmas. My bill collectors are THRILLED. 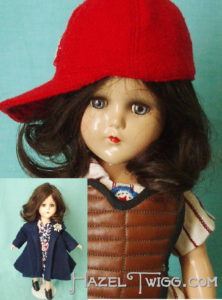 In the meantime, O.L.D. No. 80 slipped through the cracks! She quietly went up for adoption with nary a mention here! So without further ado:

A miracle occurred! The Cubs won! I may be a little late to the party, but I wanted to do a baseball girl…

Her name is Geena. She’s a small version of Arranbee’s Nanette, a mold I’ve used before, most notably on the Outlander dolls. Her clothing was based on the Geena Davis character from A League of Their Own.

Geena’s hat was made from red wool, I sewed red and blue thread stripes to create her baseball outfit fabric, and her pitcher’s gear was all made from leather.

In addition, she has street clothes. Life is not made up of baseball alone!

And with that, I leave you! Happy BEST time of the year and I hope your Thanksgiving was delightful, as mine was. You’re my favorite!

Posted in Lost Dolls | Comments Off on LEGTASTROPHE! And an UPDATE
Tags: A League of Their Own, Arranbee Nanette, Geena Davis, Kestner