We didn’t see it at first. Of course we saw that the next O.L.D. doll was the same model mold as the first O.L.D. doll Carol Jane. And we knew she was an earlier version of that mold due to the fact that her eyes were tin rather than plastic, but there the similarities to anyone else ended.

She was bald, too. But half the dolls that come through the Hideaway are bald! And need a cleaning and restringing…

After learning her name was Harriet and taking her “Before” photos, as per usual Hazel, Elizabeth, Dot, Betty and I let her look through the bin of wigs for small dolls as we stood by and watched. Because as frequently as it happens, the choosing of the wig is never, ever boring.

I don’t know how she found it. It was only visible by a few strands, having been buried beneath other wigs and bits of vintage fur caplets, but she reached in as if her fingers were magnets and the wig was steel and triumphantly waved her choice over her head. 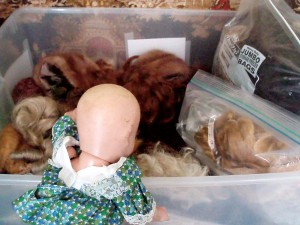 “Ah, I see!” I cried. “That’s very nice Harriet, but it’s not the proper wig for you. It’s not mohair or human hair. Your new mother might be a stickler for correctness! Later composition dolls had Saran wigs such as this one, but you’re far too early. It never would have happened!”

I’m not trying to be mean. I simply want to give my girls the best possible chance of being loved.

Hazel and the other dolls clamored to let us at least see what she looked like with her choice, and of course there’s no harm in that, so Harriet plopped her wig onto her head.

The resemblance was uncanny. For awhile we just stood there and blinked. Harriet mistook our silence for disapproval. She reached up to pull the wig off. “I’ll let you pick…” she softly murmured.

“No,” I said firmly. “You were right the first time. You’ll have that wig and nothing else.”

Then Harriet’s eyes met Hazel’s. She gasped and smiled. She saw it too. And soon, so will you.

Meet O.L.D. lucky number 7 Harriet Peabody, up for adoption Wednesday eve! She’s taking a little longer, as her outfit is a little more elaborate than most…Will she find love, even with an improper wig? I hope so!

Tomorrow: Hairy-Chested Fairies. Not all fairies are tiny things with wings!

Posted in Lost Dolls | Comments Off on Just Wild about HARRIET