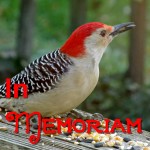 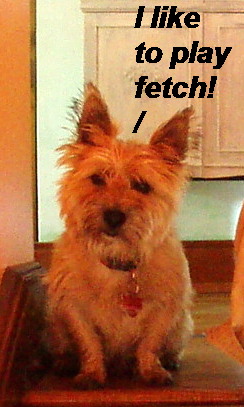 This is an excerpt from an email I sent to my New York friend last night. You have no idea what you’re missing out on! Pages and pages of tales! Here’s just one (lucky you!):

This morning I was playing fetch in the backyard with Teddy, and I looked over and there was one of these huge woodpecker birds with the red head and the black and white speckled body lying dead at the base of one of my trees. Of course, I felt badly for the bird. However! I cannot handle handling dead things. Luckily, my cats weren’t interested. That would have been traumatizing! 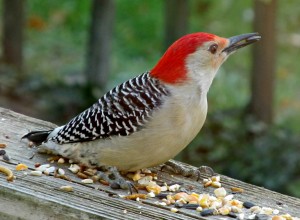 I told Julie and zip! Scott, bless his heart, came right over. He asked for a bag, I gave him three, requesting that the bird be triple bagged (otherwise I would not be able to throw any garbage away in the garbage can, knowing that I would see the dead bird in there). He kindly obliged.

Well, today’s a windy day and as frequently happens, my garbage can tipped over. Usually in my garbage can there are little bags of Teddy poops from when I walk him, so when I saw that a bag had blown out I blithely went over to pick it up and throw it back away.

Then I saw the triple bagging.

ACK! I got a snow shovel to try and scoop it up, which didn’t work, the thing kept rolling. So I got an ice breaker and tried to scoop it up that way. Success!

Just as I finally got it onto the blade, I heard “CAW!”

I screamed and nearly dropped the bag! SURELY NOT. It was hours later, and both my cats had walked right up to the bird and it had no reaction at all!

It must have been a bird nearby. A bird with uncanny timing! It couldn’t possibly have been the dead bird’s spirit. Or that the dead bird had actually only been in a coma and had just now woken up!

And that is my exciting story for the day. My life is an adventure, as you can tell… 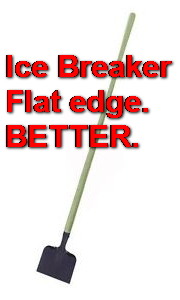 This is an ice breaker. It has some weight to it. Very handy for wielding up and down when winter is frigid and you’ve had an ice storm.

Addendum: I have no idea what killed that bird. There wasn’t a mark on him – from what I could tell from ten feet away, which is the closest I would get until he was triple bagged.

The tree that he was at the base of is half dead, having been struck by lightning a few years before. Now, my theory, which I shall have to work around because I have been BANNED from saying the “B” word ever again from my brothers, is that, um, BUTTERFLIES live in dead trees! Or so I’ve heard. Perhaps the bird was pecking away and has the same phobia as I! Perhaps he was startled by a colony of butterflies emerging from the dead part of the tree and he fell, striking his head on a root!

That’s just a theory, of course…

And on THAT note, happy Wednesday!

Posted in Life in Iowa | Comments Off on Iowa! The Adventure Continues…