If You Want To View…Paradise 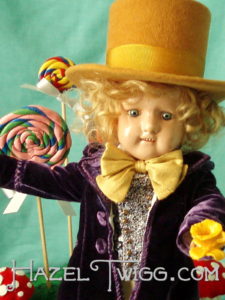 Notice the little daffodil tea cup and saucer Willy is holding. I made that to mimic the one movie Wonka drinks from and then eats.

The following is the opening of my description for O.L.D. No. 78, Gene Wilder as Willy Wonka! You can see the adoption page HERE. Willy Wonka is a Schoenhut doll.

Growing up, my little brother and I fought like cats and dogs. Only WORSE. I guess when you have a family with seven kids, it’s bound to happen. And wouldn’t you know, we were born right next to each other. Later as teens when we discovered a mutual love of music and singing we learned to get along, but oh! Those pre-teen years… 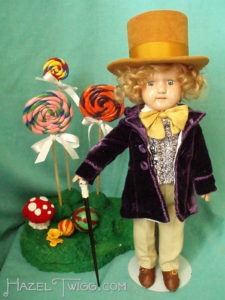 All except for one chunk of time. Reader, I am about to reveal my age. It was the summer of 1972, and I was 10 years old. My father had gotten an extra job at the movie theater so that aaaallll us kids could go see movies for free. He was such a good man. “Willy Wonka and the Chocolate Factory” was playing in our small town of Cedar City, Utah. I was still suffering from culture shock as we’d only recently moved there from Hawaii, and I hadn’t made any friends yet. So off my bratty little brother and I went, walking to the downtown theater on that ordinary summer day.

Willy Wonka in The Chocolate Room

The theater darkened, and magic happened. A strange, sometimes bizarre, always hopeful, and chock full of candy magic. The spell of it was still wrapped around my brother and I as we made our way home. At the time, halfway between our house and the theater there was a tiny little candy shop. It was called, “The Sweet Shoppe.” It’s the place where I first discovered Swedish fish. But I digress. For just that moment in time, I was Charlie! I was the one destined for Greatness! I was that sweet, humble child! So of course, I was nice to my brother who probably in his mind was Charlie too. You can bet we went and saw that movie more than once. 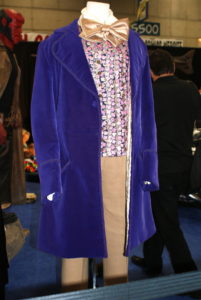 This outfit is a lot more detailed than you would imagine. The vest is sparkly, and the purple velvet jacket has purple braided trim going around it.

With the recent passing of Gene Wilder, the original and best (in my opinion, much as I love Johnny Depp) Willy Wonka, I just had to do something!

My life is a musical. Such is one of the perks when you live alone with two very tolerant pets. You can sing all the live long day, and no one complains! Case in point: Months ago, at the beginning of summer when I had a doll do much better than expected, I splurged and got two little window air conditioners. In previous summers, I could refer to my sewing room as a sweat shop and not be joking as my home does not have central air. 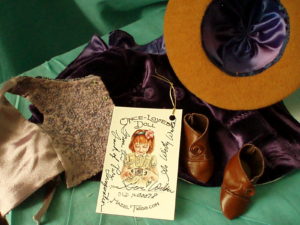 I didn’t happen to have sparkly purple flowered fabric for the vest, so I hand embroidered metallic thread. You can see the inside here. I kid you not, it took me an hour per sq. inch! I still have half to do. The hat is entirely hand sewn.

Such heaven! Such bliss! I put one in my sewing room, and the other in my bedroom. But my poor dog Teddy. He’s not allowed in my sewing room, so on those sweltering days (and the corn that surrounds us magnifies the humidity and heat), he would just lay in the living room downstairs and pant. 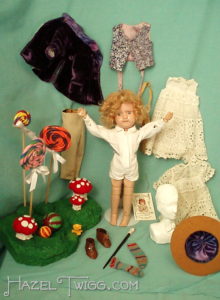 You can’t have a Willy Wonka doll without candy! I whipped up a batch of homemade cold porcelain and made lollipops, Julie gave me some Styrofoam for the base, a little rice for grass, some paint, and voila!

Until I got those air conditioners. About an hour before going to bed, I would go upstairs and turned the bedroom one on full blast and close the door. Then when it was time for bed I would gather my hot doggie into my arms, and I would sing:

In a world of

And then I would fling open the door to a room filled with blessed coolness for a very grateful dog. BEST MOMENT OF THE DAY.

“Pure Imagination” is the song Willy Wonka sings when he leads the children into The Chocolate Room.

I also sing, “I’ve Got a Golden Ticket!” all the time, changing the lyrics to suit different happy life occasions.

This movie’s given me so much joy, and I’m so glad it was made. It wouldn’t have been what it was without Gene Wilder. I shall miss him. 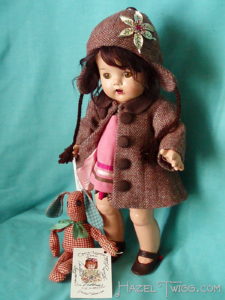 Speaking of missing, whoops! I skipped over an entire doll! She was kind of a clue to what my next doll would be. Her name was Gilda, and she has a little rabbit named Raddish. Get it? See what I did there? Will Gene Wilder and GILDA RADNER?! One of the first tributes I read after Mr. Wilder’s passing was, “He’s finally with Gilda again…” How sweet.

Gilda was adopted by…Hillary, of New York, New York! Thank you so much, Hillary!