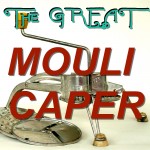 Many of you know and love my little sister Julie. I am “the other sister” to her bright, sunny friendliness.

“No,” another Rolfian will reply, “that’s the other one.”

Hard to think I almost killed her in my youth… 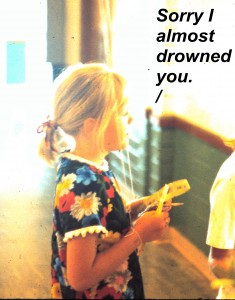 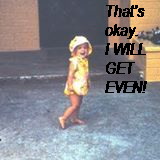 I was ten years old, so Julie must have been just over one years old herself. I took over the mothering of her as much as I could. She slept in my room! I was the one that got up in the night to take care of her (and yes, you helped Mom).

One day I had taken my new little sister to the beach. She was barely old enough to walk! But we lived in Hawaii, and it was just down the street. It was a mild little place, Clissle’s Beach was. I was even baptized in it! In the ocean! It was just a part of our life.

So there I was in chest high salt water, my baby sister Julie on a canvas air raft, trustingly gurgling and laughing.

One minute she was there, the next she had completely disappeared. You know what panic feels like? It feels like THAT. There were several other people at the beach, but no one noticed. There was no time to scream for help, no time to panic. All I could do was plunge my arm into the water and hope.

I reached in. Nothing. Again. Nothing. Maybe my parents wouldn’t notice. They already had three other little girls… 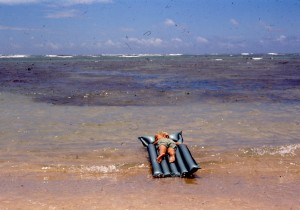 Look! My Mom found a picture of Julie on a float! KISMET! I don’t know if this is the exact same float, however. The one I recall was canvas, yellow on one side, blue on the other (Cub Scout colors!) with white rope that went in and out of grommet. I told the story for an acting class in college. The audience was riveted. I got an “A.” Doing the plunging action with the arm and recreating the intensity of my emotion when it happened makes a big difference. So when you read this tale, do it FERVENTLY.

The third time I felt a bathing suit strap. I held on and pulled with all my might. Julie came up sputtering and coughing and crying. I grabbed her and the raft, which I had somehow managed to hang on to, and made my way to the shore.

My heart skittered when I saw my eldest sister January lying on the beach. I waited for her to spring up and scream, “You! You almost MURDERED JULIE!!” But she didn’t. She just lay there. I was happy to discover that her eyes were closed behind her sunglasses. A clean getaway then.

I never told a soul in my family. Not for thirty years.

Years later, Julie got back at me – although she doesn’t remember this. We were in a thrift store, hunting for treasures. 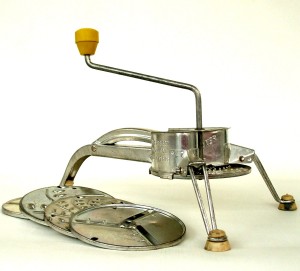 This is exactly like the one we grew up with. The yellow rubber handle and everything. Who wouldn’t want this glittering silver engineering marvel?

For those of you who don’t know, a *Mouli is a cheese grater, possibly French in nature. Growing up, we used this thing religiously. Every Sunday was Mexican food day. Every Sunday while someone else cut lettuce, one of us would be cranking that handle around, grating cheese (better than the other way around! Har.)

I had always wanted a Mouli of my own!

“Huh,” Julie responded. “I think I’ll buy it.” She snatched it out of my hands.

I was too stunned to say anything. This was completely out of character! I didn’t confront her on it for years, when I was finally able to bring it up.

She CLAIMS not to remember!

She CLAIMS that she will give it to me!

Know where it is? In her attic. Right now. For years I toiled and toiled, nearly grating my own fingers to bloody stumps because I had to use one of those flat grater thingys because I had no mouli.

Of course, now that cheese is sold already grated it’s not so much of an issue, but still!

I think we’re even for the near drowning now!

*In Hawaiian slang, “Muli” means “bottom” or “bum,” which makes me giggle in a juvenile manner.