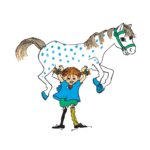 It has been a very long time since my last doll. I had an idea of just who I wanted to do, and…there she was! The perfect girl! She eagerly started removing the clothing she had arrived in so that her journey could begin. My heart sank.

“Your legs!” I exclaimed.

“I could, but I’m so rusty. I need to get right in and start sewing before I lose my nerve. I’m so sorry…”

Her eyes filled with tears. I felt badly.

I llfted one of her red braids. “Pippi.”

I looked at all the faces surrounding me, all wearing the same expression of confusion. Of course! The character wasn’t created until 1945. Well after these girls had lived and loved and been outgrown by their first humans. Suddenly I gasped, picking her up and kissing her head.

Thus begins the description for Hazel Twigg O.L.D. (Once-Loved Doll) No. 129, Pippi Longstocking. You can see her adoption page HERE.

Our Pippi is a 13″ Ginger by Ideal, who also makes the popular Shirley Temple doll. In fact, Ginger and Shirley have identical bodies and near identical faces, except Shirley has two dimples in either cheek, while Ginger has a single dimple in her chin.

Pippi Longstocking is the heroine of a series of books by Swedish Author Astrid Lindgren, created as get-well stories for Lindgren’s ill 9-year-old daughter. The first three books in the series were published in 1945, although they weren’t translated to English until 1950. The second series came out 1969.

Pippi is brave, has super human strength, stands up to bullies and only likes to do things that are fun (don’t we all?). She has a little monkey friend named Mr. Nielsson.

In her native Sweden, Pippi is a cult children’s hero and even has a theme park dedicated to her.

Because of her popularity, I had lots of images to choose from for inspiration. She dreams of being a pirate when she grows up, hence the Pirate costume. Her parents are both gone, hence the patched condition of of clothes.

I went a little overboard with Pippi, although not as overboard as it appears. Both her pinafore and coat are reversible, with distinctive fabrics on either side. She also has five stockings, none of which match.

So there she is, and now my feet are wet again! With the situation going on in the world today, I have been presented with the opportunity to make a nice, cool glass of lemonade with all these lemons. Just in time for Summer!

And with that, I leave you! I’ve missed you, my darlings. You know why? Because you’re my favorite.