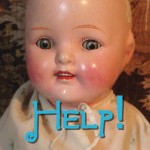 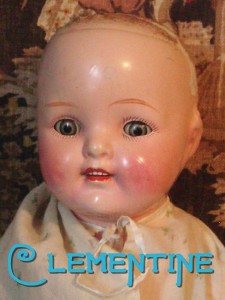 Meet Clementine! She showed up unexpectedly, and at just the right time, too. I am a firm believer in “Stupor of Thought.” That if you’re having such a thing and nothing you try will fix it, you need to change courses.

I was working in fits and spurts on Molly McGuire, the next doll who was going to be put up for adoption. But we couldn’t agree on anything! I think it’s because it was simply Not Her Time. It was a mutual decision.

There was a knock on the door. I answered, since I am the only one in the house who can reach the knob, and I knew. There she was! The next girl who was actually meant to be next. Molly instantly agreed.

Poor Clementine arrived completely bald, with only a tiny snippet, no larger than a dime, of her previous wig’s netting. But such a winning smile! And so the wig trials began. 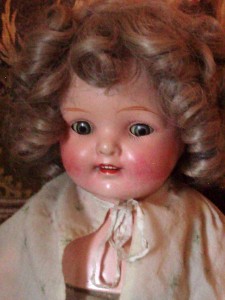 The Shirley Temple. Cute! But too acrylic. 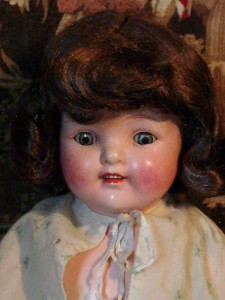 The Gidget. Speaking of “Gidget”, this wig is made of Saran, a mostly 50’s era plastic that I suspect also has something to do with the wrap of the same name. 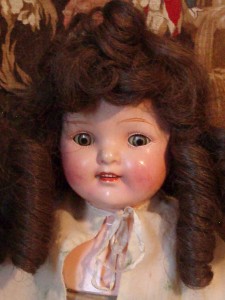 The Little House on the Prairie. Far too big and overwhelming for that sweet face. 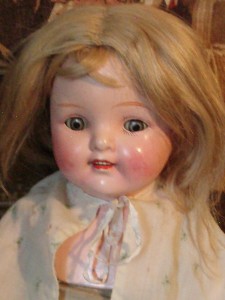 Le Blonde. This wig is likely older than Clementine herself, a probably came off of a bisque-headed doll. 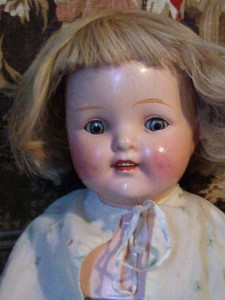 The Little Girl Who Cut Her Own Bangs (I’ve done that!) 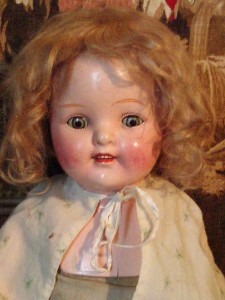 The ONE. It’s a nice, soft mohair that suits her era.

You may wonder why I chose the wig that I chose. You’ll see! Clementine has a lot of flaws and needs some work, but She’s The One! My goal is to work faster than I’ve ever done before, and finish her in two days time, putting her up for adoption beginning one day after Sunny Joy (who can still be adopted for a very small fee, and she’s lucky number three!) ends on Saturday. Clementine will be available late Sunday afternoon. That’s actually three days, but I work elsewhere tomorrow, so…

So much to do!

If come Monday you hear not a peep from me, ye shall know the I Have Failed. I’m going to do everything possible not to let that happen!