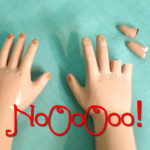 When you handle as many of these O.L.D.’s as I do, you’re bound to have a mishap now and then.

I have a doll up for adoption. This isn’t her “official” post, but if you like, you can see her page HERE.

When she arrived, it was only upon closer inspection while cleaning her that I discovered that some of her fingers had been broken and reglued, and others had been completely rebuilt! I’m happy to say it wasn’t a bad job, but the angle was slightly off on one, and another was a little too short…hmm….to fix or not to fix?

I had her two little arms in one hand and was taking pictures with the other to ask another Holder her opinion, when CRASH. I dropped her arms! Two of her little fingers broke off! “No problem,” I thought confidently. “This isn’t my first rodeo with DeWees Cochran hands,” I said snootily to myself, preening because I knew what these types of hands are called – even though there was no one around to witness my brilliance.

To rebuild fingers, it’s a good idea to insert a pin into the stub for strength. Have you ever tried to hang a picture in an old house, only to have the hammer practically bounce back into your face because the wall’s so hard? This Anne Shirley’s fingers are IMPENETRABLE. I was going to need a drill bit. A really, really small one.

Here is the story in picture and song. Also, I’m probably dancing…

Here are the hands BEFORE. See? Not a bad job! The pinky on the left hand was a little stubby, and the ring finger on the right was at a slightly off angle. But not a bad job at all… 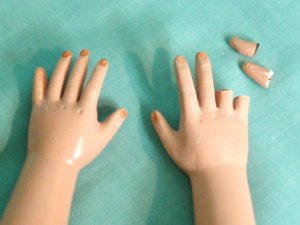 AFTER THE WHOOPS. Dingity, dangity…And, to add insult to injury, I LOST THE RIGHT PINKY, which was original and reglued! 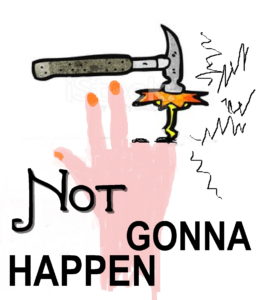 That pin just bent and scratched the heck outta me.

I usually insert stronger-than-normal pins that I’m able to “drill” in by hand. But as small as this drill bit was, it required a thicker piece of wire. I used a lawn flag thingy… 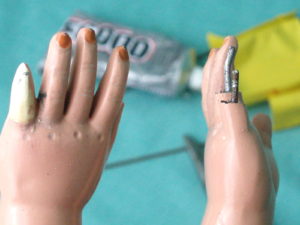 While I was at it, I sanded the slightly stubby left pinky so I could adjust the angle. Note the inserted wires are curved, because Dewees Cochran fingers are curved. 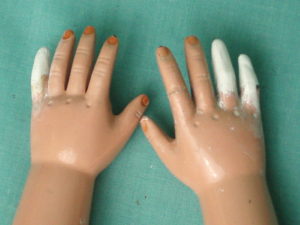 After rebuilding. I use an epoxy called Milliput. It’s from jolly old England. 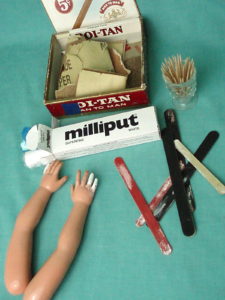 HANDY TIP: Emery boards are AWESOME for rebuilding fingers. They’re thin to fit in between, and rigid for maneuverability.

HANDY TIP: These types of hands have a clear-ish, orangey nail polish. To achieve this, just mix some orange paint in the right shade with a little craft varnish. Voila!

SIDE BY SIDE COMPARISON: 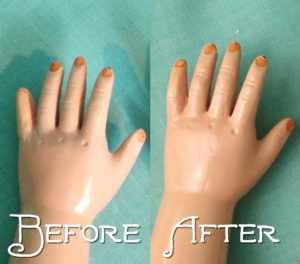 So now the left pinky is a little longer and at a better angle than before. 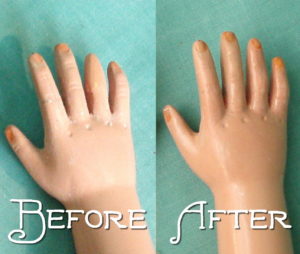 The ring finger is slimmer and longer.

Was it worth the extra effort? I secretly don’t think so. If I could pull a Cher and turn back time, and NOT drop those poor little hands, I would do so. Glass half full, practice makes perfect. Yessirree, a few dozen more dropped hands, and I’ll have these hands down to a T.

7 Commentsto First, Do No – WHOOPS!