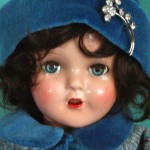 As I’ve written in my upcoming book, “Hazel Twigg and the Hollyhock Hideaway,” SEVERAL dolls have passed through these gates. Alas, all of them cannot be featured in the book itself, but they still deserve some sort of mention and this seems as good a place as any. I’ll highlight a doll or two every week! Here goes.

There was a little girl,

Who had a little curl,

Right in the middle of her forehead.

When she was good,

She was very good indeed,

But when she was bad she was horrid.

Do you see that? Do you SEE that curl?! I think this little stinker put that there HERSELF. That, or Mother Nature! Because it wouldn’t budge. And after the niceties and the brief honeymoon were over, I can see why! This sweet little thing – Alice, her name was. I still wake up screaming – became a monster!

Salt in the sugar bowl!

Food coloring on the toothbrushes!

AND IT WASN’T EVEN APRIL FOOL’S DAY!!!

You would like to think that each of these angelic-faced creatures are just that: angels. And she WAS! Most of the time. Like when she…hmm…well, I can’t think of anything right now, but I’m sure she did many nice things. Hmm….

But there are different strokes for different folks and I knew there would be someone out there who would love her. So I worked just as hard for her as I would have for any of the Lost Dolls that come to my door. Here’s the rest of her outfit. Her dress:

I found the fabric in an old cardboard suitcase in an abandoned house that I purchased. There wasn’t very much of it, but she INSISTED that THIS was what she wanted her dress to be made out of! “It suits my eyes!” she said. And so I did. “And red buttons to set off my lips!” she demanded. And so I did. I also made coordinating bloomers because she wasn’t always as ladylike as I would have hoped. I mean, note the boots!

Here she is with her coat: 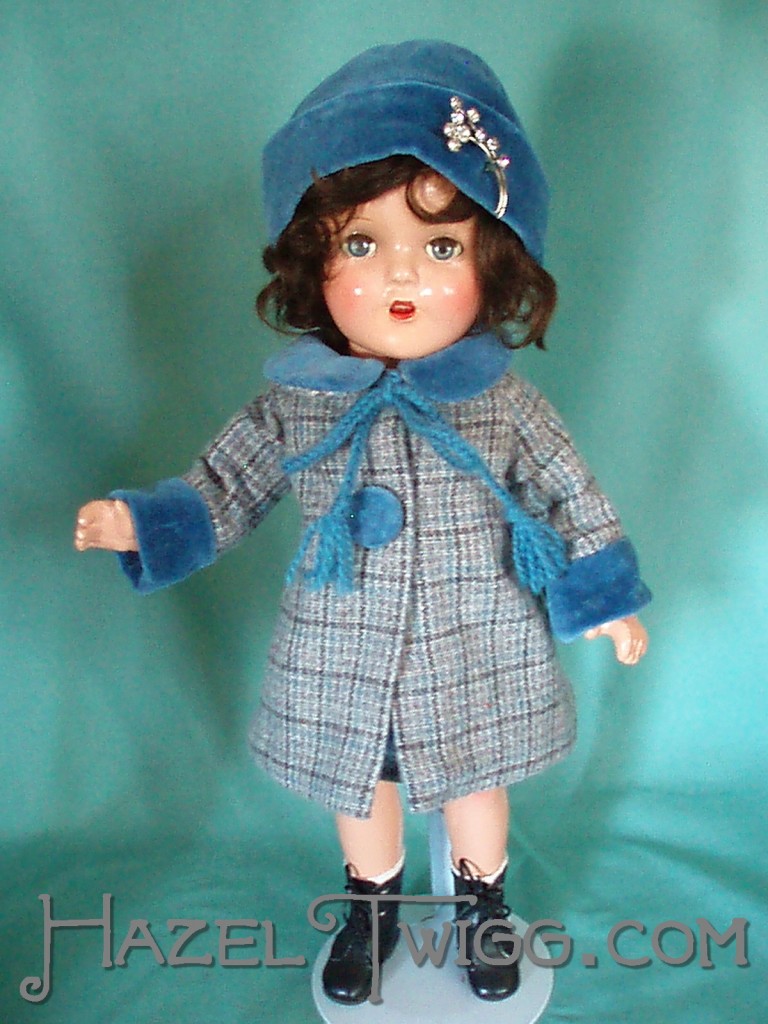 All made using vintage materials found all over the place. The blue velvet trim was from some old curtains, I believe (Maria Von Trapp and Scarlet O’Hara got NUTTIN’ on me!).

I know that she is happy wherever she is. And I’m sure that by now, her new owners have learned: Always Taste First.

Just a few of the Upcoming Dollies: 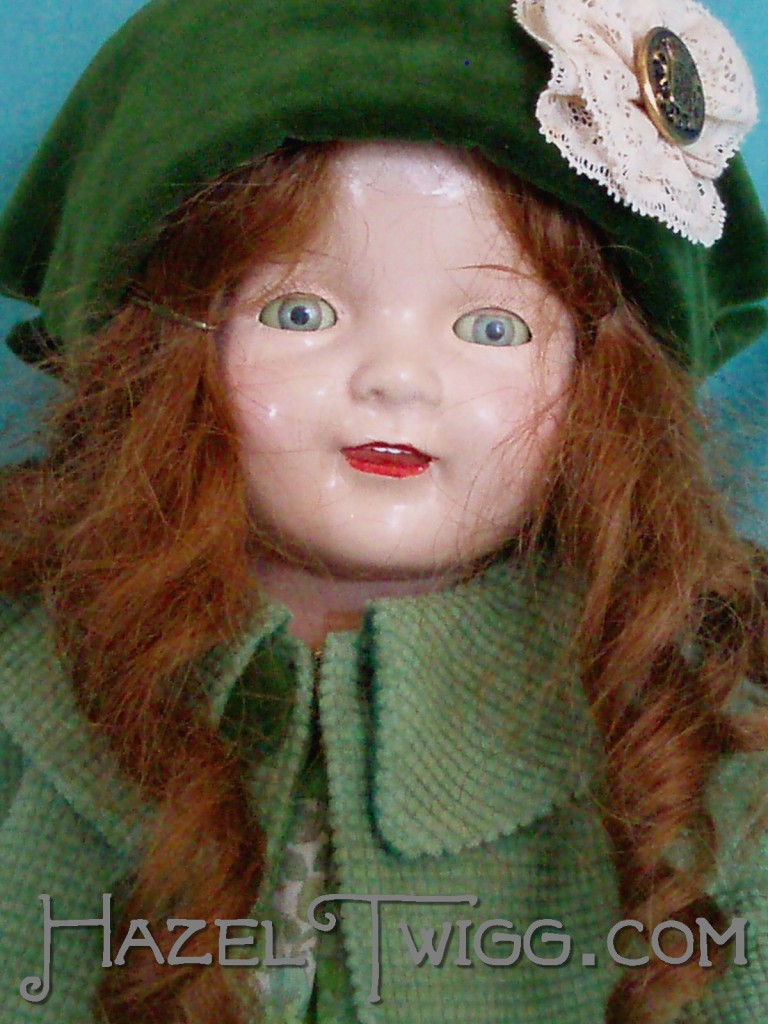 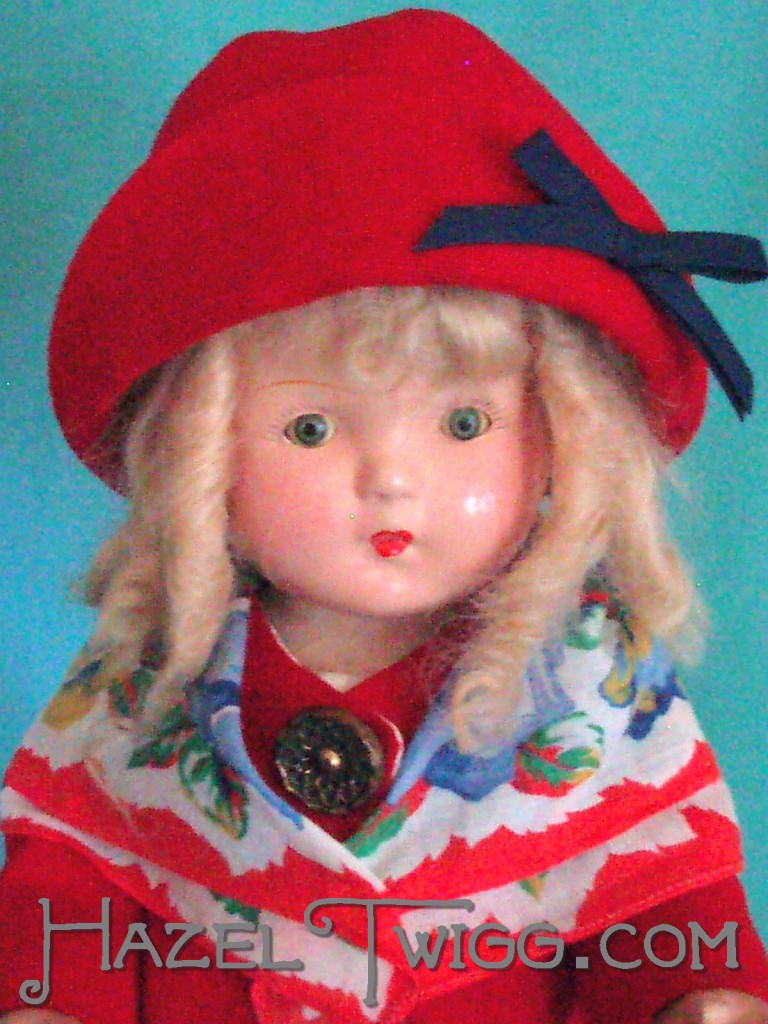 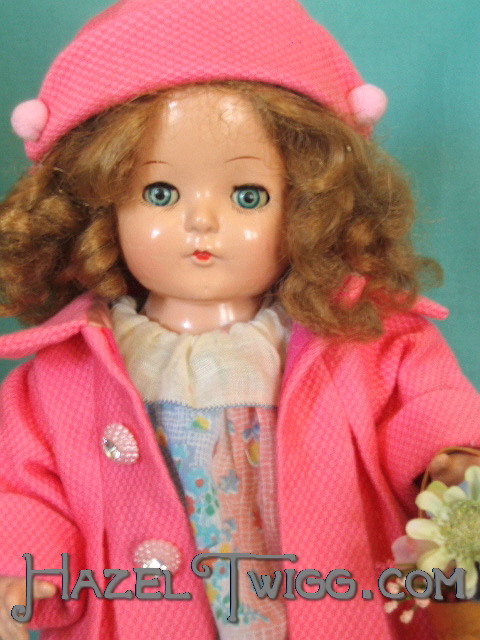 Poem “There Was a Little Girl,” by Henry Wadsworth Longfellow.

Doll photos Copyright © 2013, HazelTwigg.com. We welcome sharing our doll photos with your friends, provided the photos are not altered and the “HazelTwigg.com” logotype remains.