Yes, I confess! I overslept! Not that it’s here or there, but it rarely happens that I sleep past six. Maybe once or twice a year. Better buy a lottery ticket…

Things were going better in the Ukraine but now there are some hiccups. To misquote Shakespeare, “The path of true freedom never did run smooth.” Nina is understandably distracted, but I still have a little art to debut.

First! Chapter 25 The Excursion. Hazel, Ruth and the dolls are driving through town. It’s the first time Dot and Betty have seen downtown Reliance since going dormant decades before. Naturally, there are differences!

“WOOLWORTH’S IS GONE!” Dot and Betty shouted in unison.

“What’s a wool’s worth?” Hazel asked.

“Woolworth’s,” Dot corrected. “It was the very best store ever. They had everything! We used to search for old bottles and then turn them in for money – which we usually spent at the soda fountain. We would buy malteds and egg creams…Well, we wouldn’t get our own, but Jane and Jenny would share with us…” 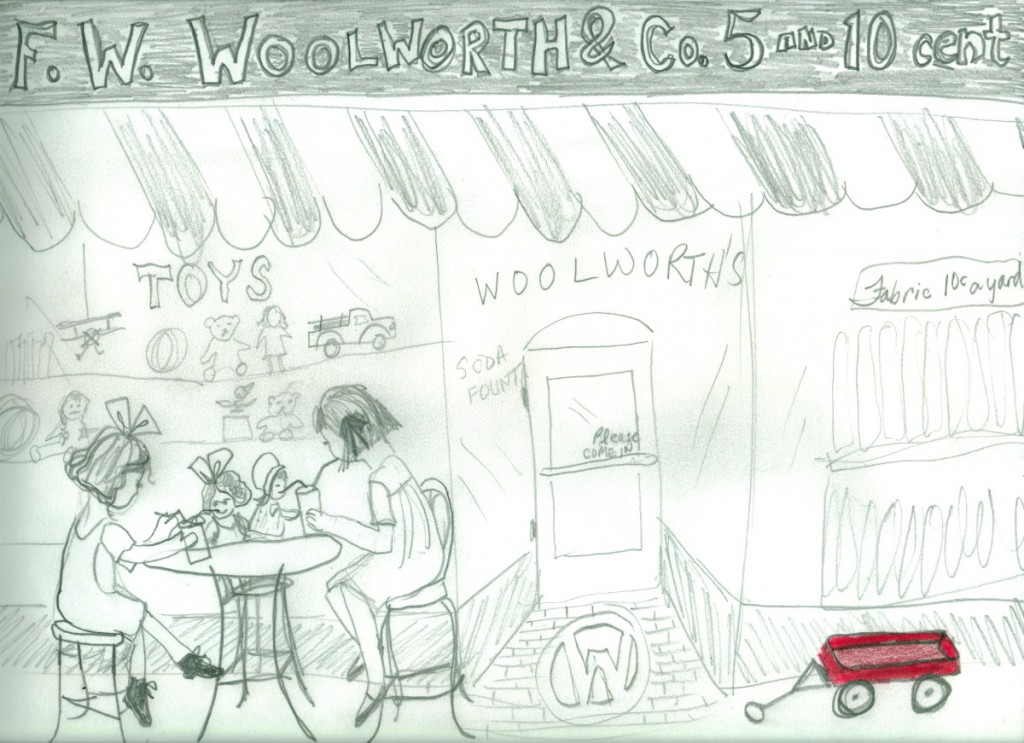 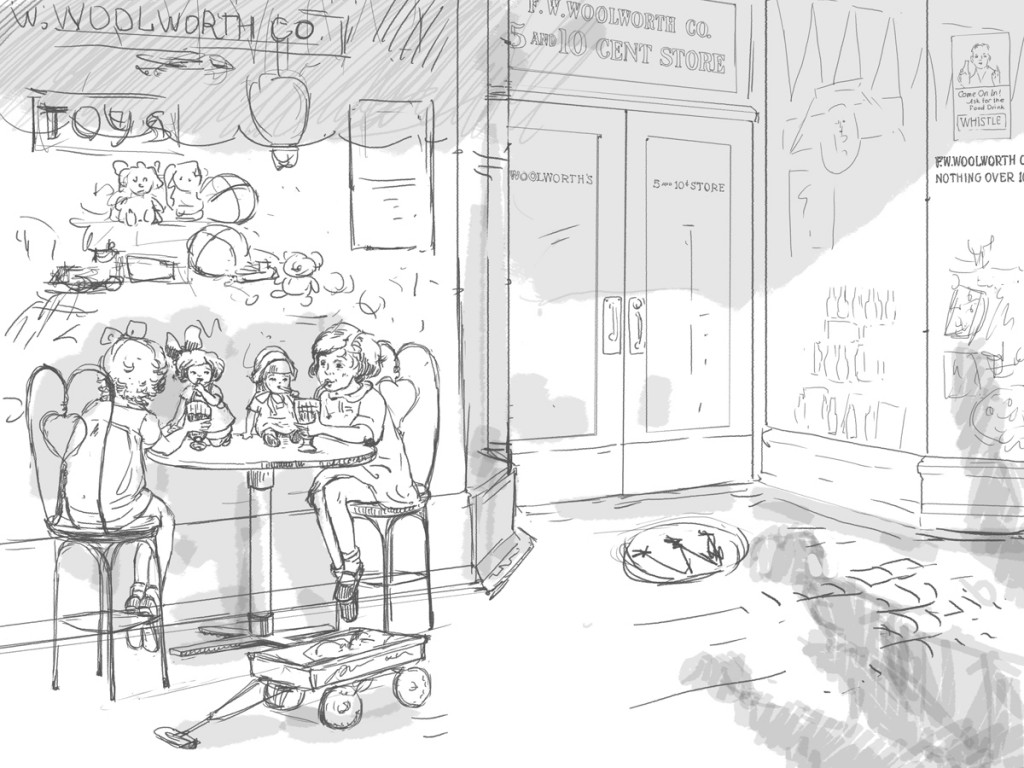 Can’t wait to see it in color!

Next, I just have some of my sketches to debut. Chapter 26 Split Pea:

Hazel does NOT want to go to school, especially wearing old clothes from the attic! Especially since her first day would also be her birthday, and Ruth is threatening to bake cupcakes for Hazel to take. Ruth does NOT seem like the kind of person to measure ingredients, something Hazel’s mother has stressed time and time again is important when baking. She plans to fake being sick.

Then they open the trunk in the attic where the clothes are kept, and Hazel smells something awful.

…she wouldn’t have to fake barfing. She could just take a whiff of these clothes.

She could see if now: A mothball-scented, lumpy cupcake-bearing, Pioneer girl. She may just as well tape a note that says “Kick Me” permanently to her back. 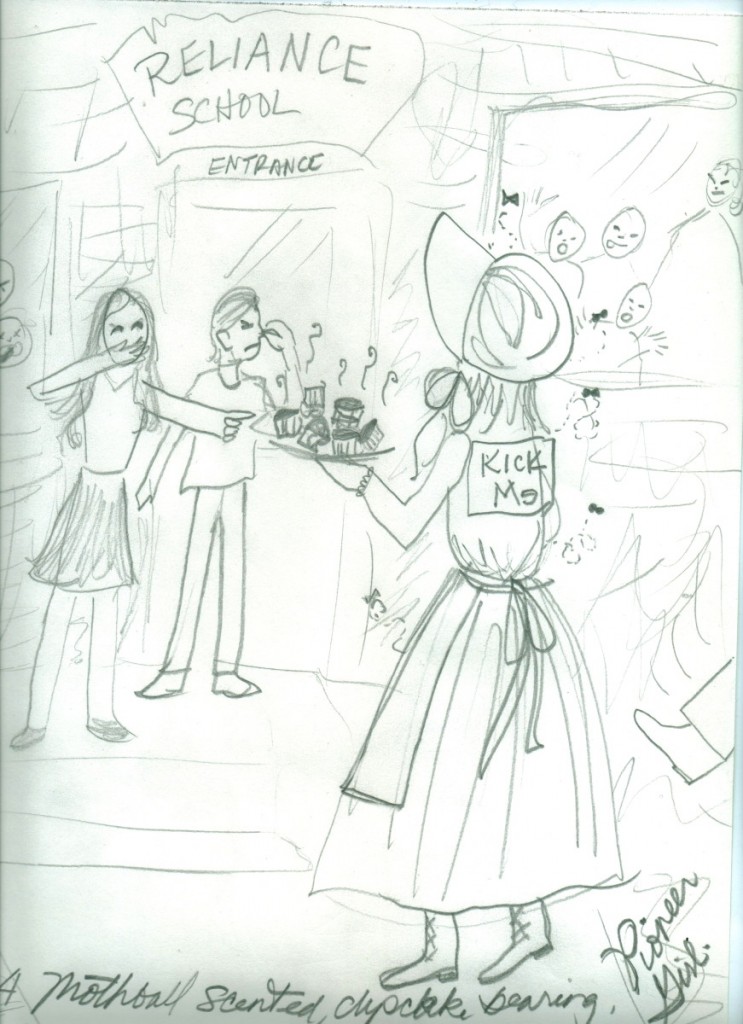 Next, Chapter 27 The Once-Loved Doll. Pinky has just arrived at the Hideaway. As Ruth picks up and comforts the little doll, she calls different instructions out to Hazel, Dot, Betty & Elizabeth to help make the new arrival comfortable.

Hazel’s task is to start a fire. Gulp. Her mother had taught her to fear fire most of all! And cars. And water…

Everyone else is going about their business without a care in the world! Hazel decided that she would too.

Hazel tried to whistle out of nervousness. She lifted the lid of the box to the side of the fireplace and removed the long match, noting the well-scratched metal area. She closed her eyes, and ran the match along the strip. To her surprise, it lit the very first time! Success! She promptly dropped the small flame. Seeing it there on the hearth tile, still burning, she quickly panicked. Why hadn’t she gotten a bucket of water before she even attempted to light that match? Here this house had stood for over a hundred years and she, Hazel, the girl who was careful above all else, had just destroyed it.

“Do you need some help?”

To Hazel’s surprise, Ruth wasn’t screaming at them all to run out of the house to escape being burned alive. Instead, she sounded rather calm.

Hee! I had fun drawing this one and can’t wait to see what Nina comes up with. I hope she keeps the accusatory finger that Elizabeth is pointing at Hazel.

That’s it! Better late than nevah!

Have a great weekend! Happy Friday! YOU’RE MY FAVORITE!!

Posted in Creating the Art | Comments Off on Crack of DAWN….ish…