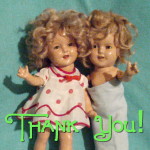 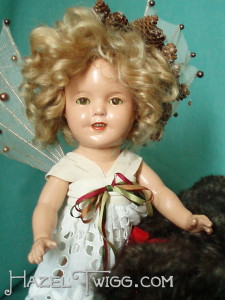 At first I said no. Of course I did! Nothing breaks my heart more than to look on ebay and see a Shirley Temple wig for sale all by itself. This wouldn’t be a bad thing, if the doll it originally belonged to were beyond repair. But it stabs my heart more than a little to then see a freshly bald little Shirley, for sale by the same seller.

“CANNIBAL!” I will rage. 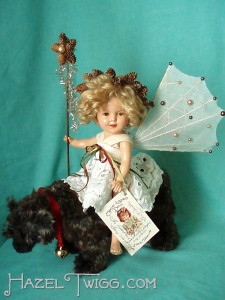 Granted, this was no wig that was being offered up. But it was a dress! A very special dress. I have two Shirley Temples at my house right now. The one that’s currently up for adoption, and another that still had her original dress. When Shirley Temple 2 saw the troubles I was having with Shirley Temple 1, she offered her dress. Just like that. And her onesie, too.

Here’s the too-big dress she arrived in.

“No!” Shirley 1 and I immediately responded. But I think Shirley 2 saw the brief expression of surprised relief and hope on my face. I had been feeling super badly that Shirley 1 wasn’t getting the launch she deserved. In that split second before “No!” crossed my lips, it occurred to me that this would help even things out for her. 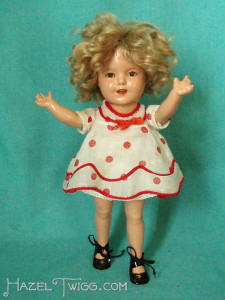 So, did I mention this girl now has an original dress?

At first Shirley 1 didn’t even want to put it on. Then she saw that her reluctance was making Shirley 2 feel badly. Now she wears the dress with joy! Sometimes the best gift of all is receiving a gift with gratitude…

Thus begins the description for #61 Shirley Temple as a Woodland Fairy and Holly Bear. She ends tomorrow! And I just barely finished her TODAY. You can see her adoption page HERE. 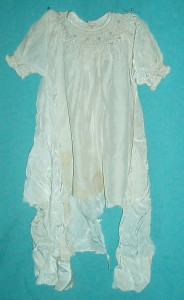 In addition to her red polka-dot dress so willingly gifted, Shirley comes dressed as a Woodland Fairy, featuring little pine cones I gathered from a friend’s Mom’s house. 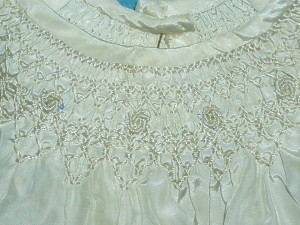 The bodice of Shirley’s fairy dress has an interesting tale.

From the description: The cream colored silky bodice of the dress was made with fabric from a beautiful, lovingly made and entirely hand-sewn Christening dress. Not only was the baby dress hand sewn, it had French seams! Twice the work! And gorgeous

smocking. Alas, the dress was moth-eaten and foxed, but there are still usable parts to it, and I think the love infused into that original gown will seep into all the subsequent dresses that I make from it.

And now, onto the next O.L.D.! Victoria and Parson were adopted by Michelle E. of Colorado! Thank you, Michelle!

And with that, I leave you! Merry Christmas, you’re my favorite.