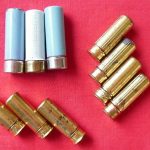 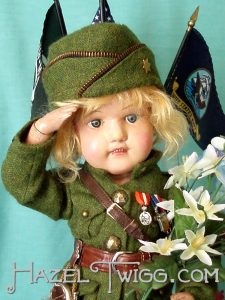 The very first thing I said to the future O.L.D. before me as I opened her box and lifted her out was, “You look as if you’re saluting me!”

And she did! When I lifted her out, her arm came up in a bent position to her forehead. It was good to have an ice breaker for this latest arrival. I almost felt as if I should be down on one knee before her. A Schoenhut! A SCHOENHUT. 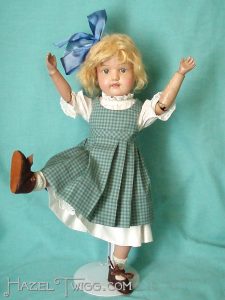 Look at the poses they can hold!

Albert Schoenhut was a German immigrant who opened a toy factory in Pennsylvania in 1872. He started making dolls in 1911. Schoenhut dolls are not composition. They’re carved completely of wood and have steel spring hinge joints. They truly are works of art.

And now here I was in the presence of one such gem, staring up at me with those big blue eyes. 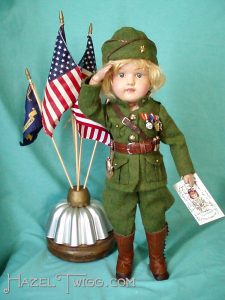 Her name is Freedom, she is O.L.D. (Once-Loved Doll) No. 71, FIFTH in the Sewickley Series, and you can see her adoption page HERE. This is how her story began…

“I have one more O.L.D. that really should go to a new home,” sweet Diane, giver of that wonderful group of Sewickley dolls (so named because they come from Sewickley, PA) instant messaged me a little over a month ago.

No matter how an O.L.D. arrives, I’m always happy to see her, and the Sewickley dolls have been especially sweet, so I was of course pleased to see these words. 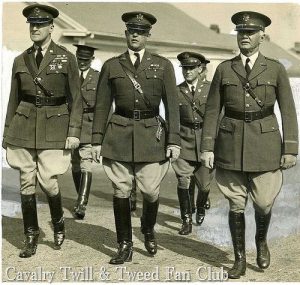 Some inspiration photos. These are Americans! I liked the idea of jodphur-style pants. I made spats and shoes instead of boots, so that the shoes beneath could be worn separately with her other outfits.

Then Diane continued, “I don’t know if you would be interested in her because she’s a wooden Schoenhut, a little bit older than 1930s composite girls…”

Reader, my heart both leapt and plummeted. I have always, always wanted a Schoenhut and had never even touched one before, let alone seen one in real life. It would be very hard to let her go. Diane’s next words stopped me in my tracks. 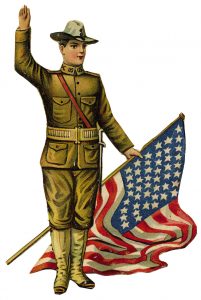 “You can keep her if you want.”

Fast forward and backwards: Several months ago Julie, my wing woman when it comes to thrift stores, came to me with three small vintage flags she’d found: An American flag, a Marine Corps flag, and a P.O.W. flag. 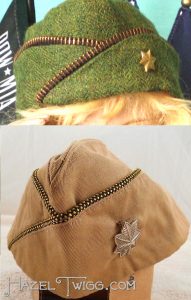 Close-up of Freedom’s hat up top. You can see my confusion! In the inspiration photo below, I thought the trim was a zipper! “How clever!” I said to myself. But, nope! Turns out, it was piping. Ah, well! The zipper adds a nice weight.

Well, that day had arrived. I was surveying the throng before me to see who would receive the special honor. It was not something to take lightly. I confided to Julie that I wished I had a doll who could salute. Then *clench!* I remembered: I do…

Like many of the Sewickley dolls, Freedom came with a lot of clothes. Lovely old clothes that I can’t look too closely at. How’d they do that? With all the tiny, perfect stitches? Even the buttonholes are hand sewn!

As for the Avon reference, “Avon calling!” was always a familiar refrain growing up. Both because my mother sold Avon for many, many years (with seven kids to raise, you did what you could!), and because it’s a family name. My grandmother was named Avon, and one of my sisters has it for her middle name.

If you’re familiar with the Avon lady, you’ll remember these:

‘Member those? I used to love them! My mom would let me have one every now and then. I felt so grown up. 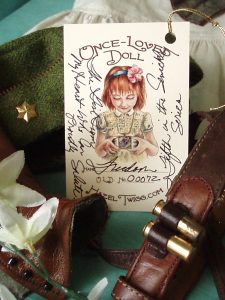 Well, it turns out, those little mini lipsticks have been around awhile! And like many things, they weren’t always encased in plastic! See if you can spot them in this picture here:

Can you? They make perfect little bullets or some such thing for Freedom’s belt! Also, remember when I took apart all those watches for the last Steampunk girl I did, Thyme? Turns out, the leftover buckles are the perfect size for dolls! 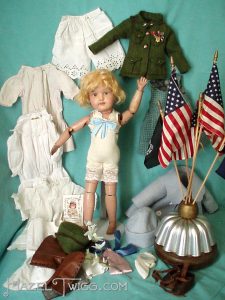 I made a fraction of these clothes. She comes with a LOT.

Working on Freedom was as exhilarating as it was exhausting. But, oh! I’m going to miss her.

Of course, my sacrifice is nothing compared to those men and women in the armed forces that we pay tribute to this Memorial Day. I’m thankful every day that I live in this great country.

I won’t have another O.L.D up for adoption until next Sunday. Every girl is special to me, but Freedom was especially so. THANK YOU, Diane! I will never, ever forget you! There are still more Sewickley dolls to come…

I’ve “met” so many wonderful people since I began this Hazel Twigg journey! One such person is Hillary P. of New York, NY, who adopted O.L.D. No. 71 “Fire & Rain” Taylor. Thank you, Hillary!

And with that, I leave you! Happy Friday, you’re my favorite!