Any Old Rum In A Storm

When I learned the next O.L.D.’s name was Jill, I of course immediately went to the nursery rhyme, “Jack and Jill.” I was watching TV that evening, and as usual while watching my mind was wandering, figuring out how to make a pail and going through different popsicle stick configurations and trying to remember where I had last seen that copper sheeting I had on hand. Jill was by my side, playing with the other dolls, practicing somersaults and cartwheels in the house to replicate her tumble down the hill. This was no distraction to me. If I don’t want to see or hear the dolls, all I have to do is simply take off my pendant. Such is the blessing of being an adult.

One of the best things about having dolls surround you is that they’re too small to do much in the way of damage, so I wasn’t worried about that. I would occasionally put my pendant on during commercials to cheer them on and make sure they were okay.

Well! The show I was watching was “Dancing With the Stars.” This was last week, mind you. It was Disney night. And I was inspired! My mind changed right there when I saw glorious Ryker Lynch’s pirate dancing his dance! JILL SPARROW. I quickly put on my pendant and called our little Jill over and showed her the pirate Jack and she was instantly on board (see what I did there? On BOARD?! Comedy GOLD!). Having been dormant for the past who knows how many decades, she didn’t know who Jack Sparrow was and had never even heard of Pirates of the Caribbean, but she was instantly smitten. “A girl pirate!” she cheered. 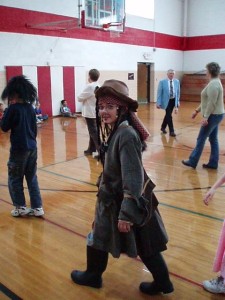 I asked her, “pants or skirt?”

“Pants!” she instantly replied. “That way I can still do somersaults and not worry!” 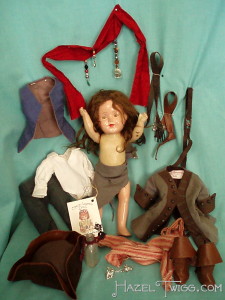 I of course should have thought of aaallll the accessories that would need to be made. Still! Fun to do!

“Jill Sparrow!” The Mayor cried when she heard. “I thought you were going to do a simpler costume this week so you could finish the book!” she squeaked.

“Actually, it IS simpler. The fabrics are already defined (I swear, a good chunk of my time is spent pulling different fabrics and hemming and hawing over which one would be best), and I’ve already done it once before for my own fine son. Plus, I have to go by what inspires me, so…”

She agreed, because she is wise.

Jill’s back looked as if it had received 40 lashes. I had a heck of a time with it. If it were sanded too smooth, the rest of her skin would have flaked off as well, and then where would it stop? I filled it in as best I could and painted and sealed it. She is content. 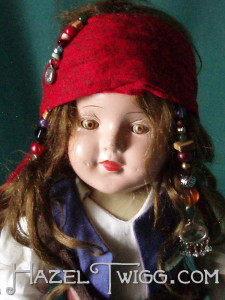 See that crystal thing hanging lowest? That was from a perfectly good set of earrings! But it resembled the one Johnny Depp wore in the movie, so off it went! And on it goes…

Jill is a crudely made doll. Her body and even the back of her head were never painted with a skin tone, even! And her hands are crudely formed as well. Time had taken it’s toll on Jill. But if you do prick her, do you not find a doll that needs love as much as any name brand? Yes you do! Her being roughly made rather suits her being a pirate, and a jolly one indeed. She has the walk down pat and wanders around the house calling out, “Why is there never any rum?” which I don’t think is the exact quote, but I can’t convince her otherwise. Bless you, Jill. I hope you find safe harbor soon.

Mermaid Julie was adopted by…Michelle! How does she do it? Thank you, Michelle! And thanks to all.

With that, I leave you! Happy Thursday, you’re my favorite.

5 Commentsto Any Old Rum In A Storm