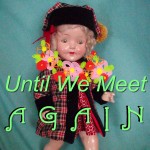 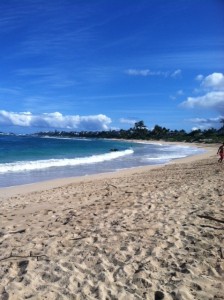 When living on an island, which the Hollyhock Hideaway sometimes tends to be, we become more and more of a family. Looking at Sally today I was reminded of something that happened when I lived on another little island long ago: Oahu.

There, especially in the small town in which I lived, we all became like family, and when part of our family decided it was time to move back to “the mainland” as we called it, there was always a big to-do.

On the leaving family’s last Sunday in church they would stand at the front of the chapel and the whole congregation would rise and sing, “Aloha Oe,” complete with plenty of tears. Sometimes the leaving family was so beloved it was a wonder there was anyone left to sing at all. 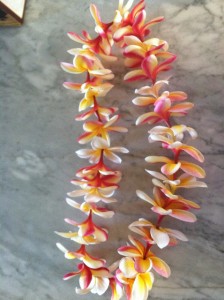 We had a plumeria tree in our front yard. Came in handy.

And all the time we were singing this distinctive song in half Hawaiian, half English, church members would walk up to the leaving family one by one with flower leis they made by hand and put them over the family members necks with kisses and good wishes. By the time we were done, more often than not the people with the leis couldn’t see for all the flowers piled ‘round their necks! 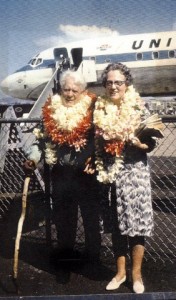 These are my grandparents, leaving in 1966. They were only there for a visit, which is why you can still see their eyes.

Well, this one time the goodbye was especially poignant. The leaving family was especially beloved and the stay behind people were even more reluctant than usual to leave the church building. So imagine the leaving family’s chagrin when there was an unexpected delay in their departure. The next Sunday, there they were.

Which brings me to dear Sally Silver. I’ve looked and looked at her this morning, and I’ve decided: why wait? 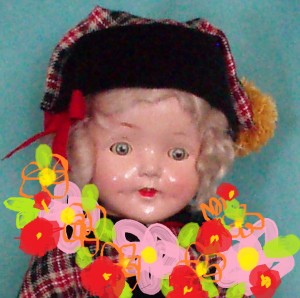 The moral of the story is: Once You Decide To Go You Should Get To Go Without Further Delay. Wish her luck!

Until we meet again