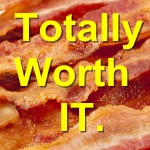 A PIG TRUCK. From the side you can see the holes better. I had a hard time finding the right kind of truck for an image to send to Nina.

“HARK! What is THAT I hear? Why, ’tis a truck!” I would exclaim in my low musical voice. “Welcome, traveler! Welcome to our town! Farewell! Farewell!” I would think to myself as the large trucks rambled through Rolfe, passing my house as they go.

I live on a thoroughfare, and while it’s not very busy (I often walk down the middle of the street), we do get our fair share of 18 wheelers. I thought one was much the same as the other, practicing my new-found Iowa wave as they drove on by. But then came this one truck. Wave! And wait for it….

It was a pig truck! Who knew? Pigs! They don’t smell so good! I’ll still never be off bacon of course, but wow! And it always amazes me, the delay in the scent. Now that I’m seasoned, I’ll see one coming and moments after it passes I’ll hold my breath. I had to get a pig truck into Hazel Twigg & the Hollyhock Hideaway, having never seen one before moving here. So I did.

Also, now that Smith & Jones were fleshed out characters and more a main part of the whole story, they needed to have boots on the ground – or in this case, fine Italian loafers. Since Smith & Jones never leave their basement I needed to create someone to take care of their final task. Enter Maxwell Brown. 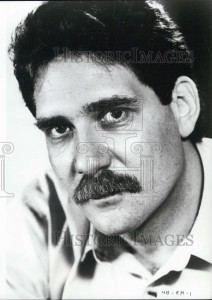 Actor Richard Masur. I had to look his name up. I don’t know why he popped into my head for Maxwell, but he did.

Seems legit. This is the largest photo I could find.

Have you ever seen the TV movie “IT” by Stephen King? I’m a huge Stephen King fan and for some reason when I was writing Maxwell, I had in my mind the one character that doesn’t make it back to the hometown to fight the scary monster clown. Well, he does show up – but as a severed head in a refrigerator. What – ?! I have no idea why I chose him, but I did. My brothers nixed him in unison, so we picked someone else as a model for the character. More on that tomorrow. Smorgasbord! Heh.

Channel 3: a small town has its own television station! I love it! There aren’t any shows, just scrolling announcements, things like the Weekly Specials at the grocery store and gas station, or Lost and Found, or Card Shower thank yous. It’s a charming, charming thing.

Lastly, house movings. It seems to happen here a lot. More than once I’ve heard of houses that are free – you just need to move them. What better way to delay Maxwell?

And that is the story behind the components of Chapter 7. Tomorrow. Hmpf! Sniff. NINA.

Posted in Creating Hazel's Story | Comments Off on About That Chapter 7…
Tags: Pig Trucks, Richard Masur, Stephen King's "IT"