Time to SHAKE THINGS UP! 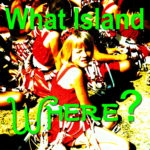 Dot heard it first, the distant and rapid tattooing of a drum. We had just opened our windows for the first time since winter began and there it was: Boom-boom!! boomboomboomboomboomboom BOOM!

Hearing that beat I was instantly transported to my childhood. I grew up on the north shore of Oahu, a horse field away from the Polynesian Cultural Center. We used to walk there and get coconut ice cream cones. At night I would lay in bed, listening to the distant music of the shows they put on featuring different Polynesian islands. You could always tell when there was a Tahitian dance going on by the fast and energetic beating of those drums…

Thus begins the description for O.L.D. (Once-Loved Doll) No. 121 Tahiti! The Tahitian dancer. You can see her adoption page HERE.

I have a confession to make: I’m all kinds of confused about Polynesia and Hawaii and the relationship between the two. The reason is this: growing up in a small town on the the island of Oahu, every May 1st was a big deal. It was May Day! As you may or may not know, May Day is Lei Day in Hawaii.

For weeks before hand all through elementary school we small kids would prepare, painting stripes on to paper and then cutting them up into strips for our skirts if we were going to represent the Maoris that year, or hula skirts out of coconut tree fronds and leis that would last through the day long celebration if we were going to be hula dancers, and working on said dances to present to the King and Queen of the festival. There were seven cultures in all: Fijian, Samoan, Tahitian, Maori, Hawaii, and, um, two more I can’t think of right now. To this day I can vociferously shout a Maori war chant at the drop of a hat, complete with waggling tongue! Sadly, no one ever asks…

Also, there are seven islands that make up Hawaii so that must be where all these different cultures come from, right? After all, we had native Fijians, and Samoans, etc., right in our school! But no. Some of those are from someplace called Polynesia. Huh? No matter! Wherever these islands and cultures are, they’re near and dear to my heart.

So it’s odd that I never thought of doing a Tahitian dancer before this. Once I got the idea, there was NO STOPPING ME.

I was fortunate to find just the right candidate: It was an 18″ Effanbee Anne Shirley with brown eyes and somewhat deeper than usual toned skin, once she was cleaned. Anne Shirley’s have very nicely detailed stomachs and waists and I love using them for my costumed dolls. Luckily, this girl was also wearing a thick acrylic replacement wig, so I didn’t feel badly taking it off. I found a human-sized, human hair wiglet. I stripped it down to the wefts and sewed them to a new skull cap I’d made just for her.

My sister-in-law Suzanne had out of the blue sent me a box of odds and ends after she’d tidied up her craft room. One of those odds was a bag full of feathers. How fortuitous!

My Dad always loved his Hawaiian shirts and wore them throughout the rest of his life. So when I found a fabric that greatly reminded me of one of his shirts, a sort of tiki brown and white pattern, I had to sneak it somewhere into Tahiti’s outfit. I put it at the back of her headdress and used it for the strap that attaches it to her head:

You know what’s tricky? Sewing seashells to fabric. Turns out, because of their curved nature seashells cannot be sewn with needles. Instead, fishing twine must be used. Only fishing twine is sturdy enough to push through the contours of each and every unique shell. Unfortunately, it’s not sturdy enough to push through fabric. So sewing shells onto Tahiti’s headdress and belt required threading the needle with twine, sewing the twine up through the fabric, removing the needle, pushing it through the shell, putting the needle back on to push back through the fabric, repeat. For each and every shell. This is why this girl took me a little longer.

The “Kukui nut” necklace is made from large dark brown glass beads with smaller wooden beads in between. The grass skirt is made from a human size hula skirt. I split the strands for a finer texture. The tassels are embroidery floss. Her “undies,” also known as a bathing suit bottom, were made from one of Julie’s halter tops from her wilder days.

From the thrumming drums that were the lullaby of my youth, to the feathers from Suzanne and the halter top from Julie, to the fabric that reminds me so strongly of my Dad, this girl has the story of my family woven all the way through. It’s been such a joy to work on her.

In the meantime, Poison Ivy was adopted by…Janey J. of Oakland, California! Though we’ve never actually met, Janey J. is quickly becoming like family herself! Janey also has Leilani, my Hawaiian hula girl.

And with that, I leave you! Mahalo! You’re my favorite. 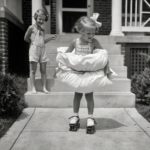 We were languishing in the living room doing nothing in particular, when we heard a low rumble in the distance. The skies were perfectly crystal clear! But that rumbling grew louder and louder. We got up from our various spots and wandered to the windows, curious as to what was making that sound. Suddenly, CRASH.

“That came from the front door!” Betty said.

We opened it just in time to see a strange little girl, breathless with laughter as she got to her feet and brushed herself off…

Thus begins the description for O.L.D. (Once-Loved Doll) No. 120, Poison Ivy, the Roller Derby girl. You can see her adoption page HERE.

Our Ivy is an early composition doll measuring about 15 1/2″. She’s a less expensive doll of her day. Can you imagine a doll that doesn’t cost much nowadays with a human hair wig and green tin eyes? And separate little inserted teeth (that scare my wee sister so mightily)?

A few days before Ivy arrived my own wee sister Julie, with her snapping blue eyes and rosy red cheeks, suggested doing a roller derby girl.

“Too modern!” I immediately nipped that idea in the bud. But then came that rumbling sound advancing to my door. Hmm…

Turns out, the roller derby as we know it today was started in Chicago in the 1930’s. Skating events first started as marathon races to see who could skate the longest, etc. Then Leo Seltzer and Damon Runyon added physical contact and teamwork and voila! A new sport was born.

Even here in our own little Rolfe we have roller derby events come into town. They are well attended and fun to see.

“Poison Ivy?” my mother cried. “That doesn’t sound like a very appealing name. Are you sure?”

“SURE I’m sure!” I answered back assuredly. “It’s a real roller derby girl’s name!”

Surprisingly, Julie said that I would need (NEED!) to do a second outfit for this girl. Something girlish for when she wasn’t skating. I of course was planning on doing one anyway. I knew a regular coat, hat and dress wouldn’t do. Not with Ivy’s boisterous personality! So I decided to do something a little…loud.

The flower buttons on Ivy’s coat were sent to me by my sister-in-law Suzanne’s mum, all the way from England. Thank you, Rosemary!

Gretchen was adopted by sweet Janey J. of Oakland, California. This is her SEVENTH O.L.D.! She also solved a mystery for me: if you look at the Registry for O.L.D.’s 61-80, you’ll see that I thought I’d completely skipped No. 79. Not so! For some reason, sweet 79 never got a post or even a mention. I’ll be fixing that on the table in a bit. Thank you, Janey!

And with that, I leave you! Happy derby, you’re my favorite.

Posted in Uncategorized | Comments Off on She Came In Like A Wrecking Ball
Tags: roller derby, W.C. Fields