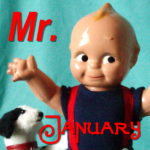 One never knows when one might need a rescue. During Valentine’s day for sure! Especially when it’s a Kewpie and his ever dotted dog…

Thus begins the description for O.L.D. (Once-Loved Doll) No. 116, Fred the Firefighter and his Trusty Sidekick Spot. You can see their adoption page HERE.

Fred, as you may have guessed by now because you are fast becoming an expert, is a 12″ composition Kewpie doll. He is the third Kewpie to have passed through the Hideaway’s doors. Can you sense a theme with me and Kewpies? That’s right, they’re all daily heroes!

I tried to get him to do a calendar-like post as firefighters are known for their calendars that are sold to raise money for good and charitable causes, frequently with rippling muscles and “Come hither” gazes. Fred was shy at first. I showed him some examples. “See? They pose with their dogs. You can pose with Spot!”

Behold the rippling muscles of his biceps! Some might call them mold flaws from factory, but we know better! Clearly, Fred has been working out.

Spot was made with a former stuffed rabbit toy. The fur was rather thick and had to be trimmed. For awhile I looked like a stuff toy myself, so covered in fur was I.

Fred’s helmet was made from leather with a chipboard frame. I studied a lot of fire helmets old and new to figure out how I wanted mine to look.

The ridges on vintage fire helmets are very pronounced, so I did reverse French seams. These things take a lot of pondering…

Because it is so close to Valentine’s day, Fred will not come empty handed! It would never even occur to him! Hopefully, he will send someone’s heart a-flutter…

Nicholas was adopted by Adele M. of Castroville, Texas. She has three previous O.L.D.’s, including Jude the Mail Carrier himself! THANK YOU, Adele, you are much appreciated!

And with that, I leave you! Happy Playoff day and may the games be GOOD. But whether good or bad, you’re my favorite.