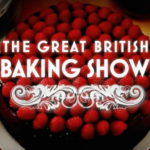 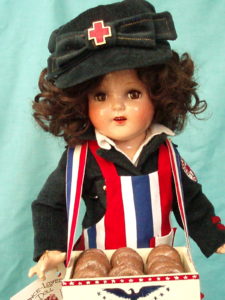 I made the doughnuts with salt dough spiced up with cocoa powder, cinnamon and nutmeg.

Second uniform. The patches are hand embroidered. The Red Cross and flag pins are made from kidskin leather.

You never know where your next inspiration will come from. There you sit, watching one of your favorite series on the telly, in this case, “The Great British Baking Show,” when all of the sudden they segue away from the scrumptious baking going on in

the tent to do a piece on WWII Red Cross Doughnut Dollies!

“I can’t believe I’ve never heard of this before!” I exclaimed. “Ooh! And look at those hats with that BOW! How stinkin’ cute is that?”

Thus begins the description for Hazel Twigg No. 113, Doris the Doughnut Dolly. You can see her adoption page HERE.

I wanted to do the uniform with the skirt and that unique hat with the bow, but I also wanted to make a “Clubmobile” uniform, that more resembled an auto worker’s coveralls. I described both to Julie. She as always just wanted me to make one outfit. I was going to compromise and make the jacket with a skirt and pants. Alas, I didn’t have enough of the gunmetal blue/gray fabric. So I made BOTH uniforms! I WON. It all took awhile, though. 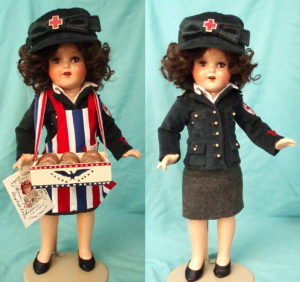 The apron and tray were based on what I saw in the mini documentary on “The Great British Baking Show.” I liked the bold colors. 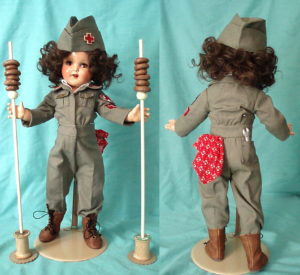 Clubmobile uniform. Note the tiny wrench in her back pocket, also salt dough.

The “Doughnut Dolly” tradition was started by the Salvation Army in World War I as a way to bring a taste of home to U.S. soldiers overseas. The program was so popular, that the Red Cross made it a central part of their entertainment program for WWII. 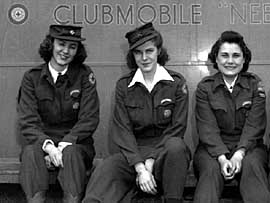 At service clubs set up near U.S. Army bases, intelligent, attractive American women were hired to dance, flirt and socialize with soldiers and of course, serve up good ol’ American doughnuts. This earned these women the affectionate name of “Doughnut Dollies.” 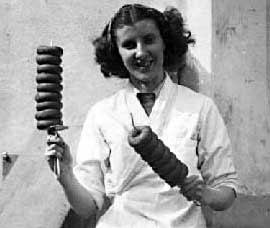 Wanting to make this program more widespread to reach more soldiers, old trucks were converted into “Clubmobiles,” which were basically rolling doughnut factories manned by women. The women had to learn to do truck repair and maintenance. From June 1944, when American forces were preparing to invade northern France, nearly a 100 Clubmobiles worked side by side with the armed forces all across Europe until May the 7th, 1945 when victory was secured. 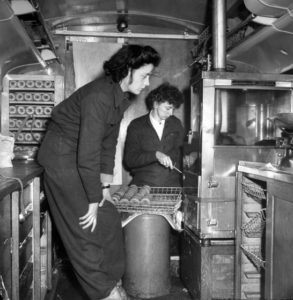 A doughnut making machine in the back of a truck.

The doughnuts were hand cut, sometimes raw, sometimes burnt, “you were lucky to get a hole in the middle” but it was the heart of those doughnuts and the touch of home hey brought that meant the most.

The program continued into both the Korean and Viet Nam wars.

Serving doughnuts to soldiers, what a novel idea! THIS is why humans will never be totally replaced by robots…

If you’ve never watched “The Great British Baking Show” on PBS, keep an eye out for it. It’s a breath of drama free fresh air!

Whimsy the Witch was adopted by a new and friendly face, Traci B. of Summerville, Georgia! Thank you, Traci! It’s been an absolute pleasure and I’m so happy to have met you.

On this Thanksgiving eve I’m thankful to all the men and women who serve, sometimes in unique and novel ways. And I’m thankful for YOU. Truly.

With that, I leave you! Happy gobble extravaganza, you’re my favorite.