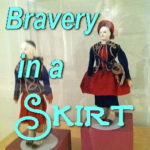 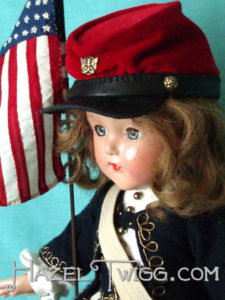 If you’ve followed me for any length of time, you know that I love to do a Patriotic doll. I was looking for inspiration and coming across images I’ve seen dozens of times before. But then I discovered something I’ve never heard of in all my days: Vivandiere.

This girl was kind of my main inspiration. If you look closely, you can see the gold embroidery on her jacket.

NOUN 1. a woman who formerly followed an army or maintained a store on an army post to sell provisions to the soldiers.

American women adopted this French term mainly during the Civil War, where both the Confederate and Union sides had Vivandieres in service. And no, these weren’t hussies! They were wives and daughters of soldiers who wanted to do what they could to help. So without further ado…

Thus begins the description page for Vivian the Vivandiere, O.L.D. No. 89. You can see her adoption page HERE. 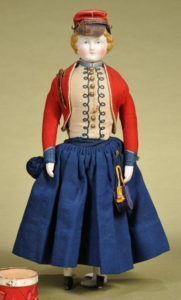 …I liked this girl’s hat and blue satchel.

I learn so much researching “What To Do Next” when coming up with inspiration for dolls! For example, did you know that the slouchy hat worn by both the Confederate and Union soldiers in the Civil War is called a “Kepi” hat? Me neither!

Unfortunately, as much as I learn there’s no way I can become an expert at something and complete an outfit in any reasonable length of time. I’m sure I’ve got some French things in there as well as Civil War. But sometimes I just have to go with what appeals to me and what I have on hand!

For example, months ago I purchased a bag of red, white, and blue fabric. It was mostly polyester, but there were a few other pieces that appealed to me as well, so for $2 I snatched it up. One of the things that appealed to me was two cut off legs from pair of bell bottoms. Somebody must’ve wanted some shorts in the 70’s…PERFECT for what would later become this girl’s skirt!

A lot of my inspiration photos came from a surprisingly lively and active site. It’s called “Civil War Talk” and they have several threads posted with more photos about Vivandieres. I was pleased to read on one of the threads a comment from a poster that said, ‘I’ve been on this site for two years, and I’d never heard of a Vivandiere!” Phew. So not just me then.

Even the official U.S. Army website has a page entitled, “Vivandieres: Forgotten Women of the Civil War.” 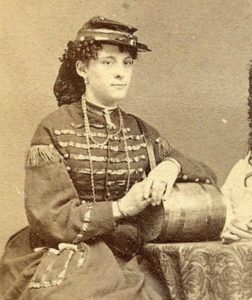 I can’t show all of the inspiration photos here, but the majority of them show the women carrying these wooden casks, so of course I wanted to make one for Vivian too. 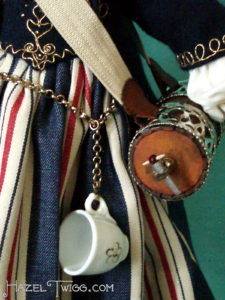 As always, I used what I have on hand. In this case, a wooden spool, napkin rings, popsicle sticks, the metal shaft from a paintbrush, a bead, a toothpick, and another metal thingy I found in the road.

I find a lot of little treasures in the road! Including the rusty ol’ bolt I found the other day when taking my new cat Piper in for spaying. In the gravel of the vet’s office, there was a just visible hexagon. I dug it out, pocketed it, took it home, cleaned it, and voila! Nice heavy stand for Vivian’s flag – which I also made!

I shall close with a refrain from a military ballad called, “The Pride of the Regiment” (or the Jolly Vivandiere) by Geo. Maywood: 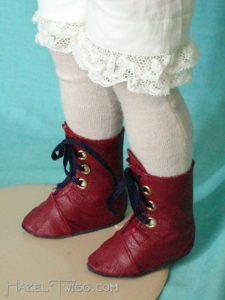 For she’s a wonder!
The boys all ponder
To whom she’ll give her heart and hand,
This dearest girl in all the land!
She is the neatest, completest, sweetest,
A girl without a peer, the jolly vivandiere!

…Now YOU know about Vivandiere’s too!

Sweet Cinnamon Drop was adopted by…Hillary of New York! I also thoughtfully sent her some scissors accidentally left in the box. Honestly, I’m surprised that doesn’t happen more often. Luckily, I am rich in scissors…thank you, Hillary!

And with that, I leave you! Happy upcoming Memorial Day! You’re my favorite. 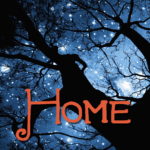 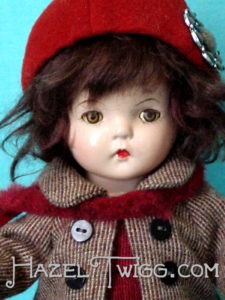 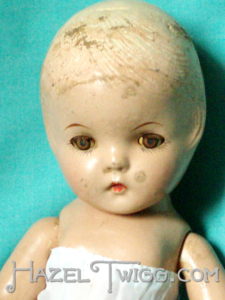 In my defense, when I picked this little girl along with her name and fabrics, it was still very un-Springlike outside. I was still clomping along in my house wearing my trusty Mukluks and infinity scarfs! I confess to be one of those very few who actually prefers winter and who has a hard time saying goodbye to it and longs for the day when it will come again.

“Hurry up leaves!” I cry to the trees with the fresh green sprouts. “Hurry up and GROW so you can TURN YELLOW AND DIE!”

To make up for it, I made O.L.D. (Once-Loved Doll) No. 88 a previously unplanned “Springy” dress. Now she’s ready for ANY season…

Thus begins the description for Cinnamon Drop. You can see her adoption page HERE.

The instant I picked Cinnamon up, I knew her name and exactly what she would wear. I LOVE when that happens! At first I was just going to use her for my video on restringing, but in that time when I was feeling like a fish in unfamiliar water, I needed to do something that felt warmly familiar. So even though spring was upon us and cinnamon is a decidedly fall spice, I decided to go with her now.

“Okay, but DO NOT make that spring dress!” my sister The Mayor cried, waving her tiny fists. “Make her strictly a cold weather girl!”

The spring dress. I have ribbon that matches better, but this one brought the dress to LIFE.

Julie only wants the best for me. It was Sunday morning and I was rushing to get Cinnamon ready to put up for adoption that night.

I’d gone back and forth. There are practical considerations! For example, her cold weather outfit called for brown shoes and what kind of spring dress goes with those? I was already struggling to regain my footing, and I already take so long on these girls…

WELL. Never tell me what not to do! Ha-hah! THAT SEALED IT. I made a spring dress for her because I found some old fabric I adore that I thought would work.

I was able to get her done in time but was exhausted when I finished. Even though it was 5:30 I decided to take a nap. There have to be some perks working for yourself! The ability to take naps at odd hours! When I woke up that evening at 10:30, it was as if there had been an apocalypse, and me and Teddy and my new cat Piper were the only ones alive on the planet. I’d completely missed Julie, who I talk to several times in the evening.

It was a little bit magical standing there outside in a silent Rolfe in the moonlight with the stars twinkling overhead and Teddy on a leash sniffing about and Piper in my arms because she isn’t fixed yet.

When I checked to see how Cinnamon was doing and saw that many people wanted her, I almost cried. I definitely said a prayer of thanksgiving. Because it’s hard to feel so lost for awhile and to wonder what it is you should be doing. So I would like to thank all who follow and who look and who bid. YOU and THIS are where I belong.

SPRING & LILLY were adopted by our dear Hillary P. of New York. THANK YOU, Hillary! More than you know.

And with that, I leave you! It’s nice to re-meet you. You’re my favorite!

Posted in Lost Dolls | Comments Off on Apocalyptic Home 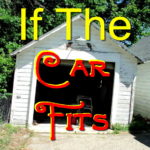 Honestly, Reader. It’s not you, it’s ME.

As I mentioned in my last post, “Hazel Twigg LIVE!” I was going to do a series of videos and post them on Facebook and YouTube, and I did! I did my level best. This was all very new to me and really rather tricky. My brothers had grown somewhat impatient, wondering why I wasn’t also on Instagram and Snapchat, and why I wasn’t posting things several times a day. They had nothing but great and loving intentions. Nevertheless, I have since had an ever-so-genteel meltdown, with tears flowing down my face like the sparkliest of diamonds and hardly any snot at all.

I think of it as sort of a Stockholm syndrome thing going on here.

When I first moved to this small town of a scant square mile in the middle of nowhere ten and a half years ago, I had a hard time not going insane if I didn’t get out of town at least – at least – once a week. 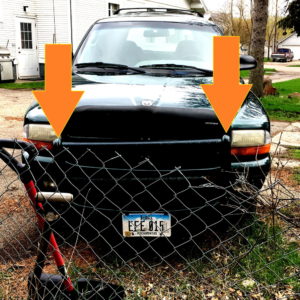 Can you tell the deer guard is bent? It goes with my garage! I bought the car back when I was able.

Enter the winters. Sometimes there’s no traveling, even if you have the will. I learned this lesson my first winter here, where I had the worst case of cabin fever ever known to this woman. I HAD TO GET OUT OF TOWN. So I called a friend with a truck, and bless his heart, he hooked up my Durango, and he drrraaaagggggged me out of that last deep bank of snow in my driveway, bending my deer guard. I didn’t care! I was free! I WAS FREE!

When I finally got to Target an hour or so later by the skin of my teeth I was tempted to kiss the ground. Not because I was glad to see civilization in the form of retail, but because I was still alive. And desperately dreading the drive back home. I vowed never to drive when the weather was bad again.

Soon I was working from home on the dolls that I love so much, although my income was not a guarantee. If I was able to make it out of town once a month during the times when the weather was good I was grateful. Then came the year of operations with months of recovery time, which prompted me to give up my car altogether. For two years I bummed rides when I could. If I got a wild hair, which I frequently did, and longed to go somewhere, anywhere! I walked to the cemetery or grocery store instead.

To keep from going insane, I embraced the trap. I embraced it hard. A Stockholm vacuum as it were. A cozy cave were I could write and create and not comb my hair or wear a bra and I go for days where the only face I see is my dog Teddy’s. I often don’t set foot outside my own yard, let alone this little town in the middle of nowhere.

So going from that to opening myself up to the world just wasn’t going to happen. I love you madly and you ARE my favorite, we’re just going to have to take this thing a little bit slow.

But Hazel Twigg is NOT dead. Far from it! I’ve gone back to working on dolls in my cozy cave alone with no one watching and I’m feverishly working on the rewrite every chance I get. I’m excited about the book’s whole new direction and still believe in its upcoming success.  And 20 years from now I shall be the token old lady celebrity on season 57 of “Dancing With The Stars.” People shall watch in dreadful anticipation to see a legend author/doll restorer prance, and I shall surprise and amaze them with my nimble fluidity and my ability to kick high, for an old lady…

And with that, I leave you! Never, ever forget YOU ARE MY FAVORITE and I adore you!

Posted in Life in Iowa | 8 Comments »